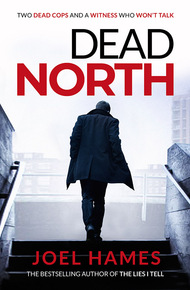 A Londoner in exile, Joel Hames lives in rural Lancashire with his wife and two daughters. His works of fiction include the bestselling Sam Williams trilogy Dead North, No One Will Hear and The Cold Years, and the break-out psychological thriller The Lies I Tell.

When not writing or spending time with his family, Joel likes to eat, cook, play the piano, and make up excuses to avoid walking the dog. There's the MMA thing, too, but he doesn't like to show off.

Two cops dead, and a witness who won't talk.

Sam Williams has a knack for getting to the truth. So when two cops are shot dead on a deserted back road and the only witness won't talk, an old friend calls in a favour.

Repaying it might cost Sam more than he bargained for...

'Dead North' by Joel Hames is a white-knuckle ride. When two cops are shot dead, struggling lawyer, Sam Williams, is asked to consult on the case. – Marissa Farrar

I DIDN'T WANT to get out of the car, but Gaddesdon wasn't keen on me bleeding all over the upholstery again while he stood shivering outside. I told him my nose hadn't bled since the last time someone had hit it, which was nearly two days ago now, but that cut no ice. So I stood there at the back of the cemetery and watched the gaps between the black-coated mourners as a box with a dead woman in it dropped into a hole in the earth.

There were words, but I wasn't listening. I was thinking of other things, of glaciers and mobile phones, hidden pasts and broken bones. I corrected myself. Almost broken. I'd assumed half Folgate Police Station would be there, and they probably were, but apart from Gaddesdon, and Roarkes, standing there right in the middle and looking nearly as awkward as I felt, I didn't recognise a soul. I took a step back and out of sight. I didn't want Roarkes seeing me. He might ask some awkward questions.

Gaddesdon I could still see. He'd found himself a spot near the front, head bowed, shoulders hunched against the cold, a giant frozen penguin. A whole gang of frozen fucking penguins praying to their penguin god, I thought, and checked the smile before it formed.

I hadn't known Fiona Milton. I'd never met Fiona Milton. I wasn't a police officer, and I wasn't from Manchester or Lancashire or wherever the hell we were. I wanted to know why she'd died, sure, but seeing her corpse buried wasn't going to help me. I cursed Gaddesdon silently. I'd have been better off waiting in the car.

The minister had finished talking and someone else had taken his place, Fiona's superintendent, a fierce-looking man with tiny eyes and a few strands of lank brown hair that flapped idly in the wind as he recalled her bravery, her integrity, her smile, her spirit. I wondered if he'd ever actually met her. I wondered if he'd even known who she was, before someone had come running into his office and told him she'd been gunned down on some godforsaken country lane in the middle of nowhere.

I wondered if I could slip away now, go back and sit in the car, which Gaddesdon hadn't bothered to lock, figuring if it wasn't safe at a police funeral it wouldn't be safe anywhere. I glanced around, searching out eyes. I didn't want anyone to see me. Bloody Londoner. Bloody lawyer. Sneaking off. No respect. It wouldn't look good.

And then I heard it.

It shouldn't really have been out of place, not at a funeral, the sound of a sniff, a prelude to tears. But this was a different kind of funeral, a defiant, stiff-backed, fist-shaking funeral. A funeral of suits and uniforms and frozen penguins, legacy and courage and all that bullshit. Not real people. Not tears.

A fat penguin shifted a few inches to the right and I saw the source of the noise. A child. Six or seven years old, I thought, a little boy in a suit that made him look even smaller than he was, his face screwed up to fight off the tears. The tears were winning. There was a girl beside him, a year or two older, holding his hand, turning to whisper in his ear. And behind them both a man, about my own age, one arm on each of their shoulders, staring fixedly ahead, as though he could see something there the rest of us couldn't, lips pressed tightly together. Jaw trembling.

The other victim had already been buried. I remembered what Gaddesdon had told me about Naz Ahmet, Fiona Milton's colleague. Same uniform. Same car. Same death. Another funeral, another superintendent, or maybe the same one, a wife and a child to mourn him long after all the penguins had gone home. I'd been on the case six days and all I'd got out of it were a handful of trips to the hospital and a bunch of leads that took me back where I'd started. I'd been close to giving up a dozen times already. Two people had died, and that was sad, sure, but sad was as far as it went. Finding out who'd killed them might just breathe some life into my dying career, so I had an interest in the whole thing. Beyond that, I hadn't really cared.

The child was still crying, quietly now, hunched into himself, shoulders shaking. I blinked and burned the image into my brain.

Whoever had done this, the bastards would pay.