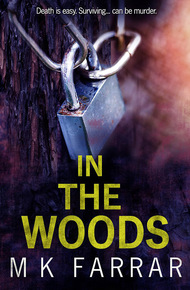 M K Farrar is a British author of twelve crime and psychological thriller novels. When she's not writing, MK is rescuing animals from far off places, binge watching shows on Netflix, or reading. She lives in the English countryside with her husband, three daughters, and menagerie of pets.

In the Woods by M K Farrar

Death is easy. Surviving...can be murder.

Twenty-three year old Cassandra Draper is the latest victim of the serial killer police have dubbed 'The Magician', due to his ability to make women disappear.

Abducted and drugged, he takes her out into the middle of nowhere, where he chains her to a tree.

She thinks things can't get any worse, but a freak accident renders her completely alone.

And no one knows where she is.

She thought being abducted by a serial killer was as bad as things could get....

But she's about to learn there are worse things than being dead.

Finally, read my serial killer, psychological thriller, 'In the Woods.' Experience the isolation of Cassie as she struggles to escape being chained to a tree in the middle of nowhere, with her kidnapper dead at her feet. – Marissa Farrar

The sun dipped lower, casting a red glow into the sky, as though the horizon was on fire. It was going to be dark soon, and there was nothing she could do to stop it.

She closed her eyes, praying she'd be able to sleep right through and wake up when it was light again. The chances of that happening were slim to none, but she was allowed to hope.

The distinctive crack of a twig snapping jerked her from her doze, followed by the crunch of dried pine leaves beneath foot.

Her eyes pinged open. Was someone there?

To her right, the bushes rustled and cracked.

Cass froze, her eyes wide, peering into the gloom. Goose bumps rose on her arms, her hairs prickling to attention.

In her head, she ran through the bigger forms of wildlife out here—bears, wolves, coyotes, and cougars. She hadn't heard any wolves howling, but that didn't mean there weren't any. She suspected a bear was most likely, however. It was on the cusp of their hibernation season, and they'd be fattening themselves up to get through winter. They ate more than berries and fish. They were opportunistic feeders, who would steal a carcass from another predator if they could. Had the smell of the man's body attracted one?

She still couldn't see anything.

Another crash came from her right, and she let out a shriek then clamped her mouth shut again, breathing hard through her nose. She couldn't make any noise. She couldn't let it know she was here, whatever it was.

Her ears strained, but everything was silent, for the moment, at least. Had the creature gone away? Or was it standing, listening out for her in the exact same way she was listening out for it? The animal might be frightened—assuming it even was an animal. After all, it didn't know she was chained up and helpless. The scent of human might be enough to keep it away, but the scent of death overcame any natural fear it might experience.

Whatever it was had sounded big, and if it decided to make a meal of her, there wasn't much she could do about it. She could kick and make a noise, but that was all.

If it came closer, she'd have to yell. She'd try to make herself big and frightening. It wouldn't understand the chains—the animal might even think they were some kind of weapon. For the moment, she'd keep quiet and hope it went away, but the minute it looked like it was showing an interest in her, she'd jangle those chains and yell like a motherfucker.

Her decision didn't change her fear. Her entire body was shaking.

Had whatever it was gone already?

It was getting darker by the minute. Though there weren't the clouds of the previous night, and she would be able to see something in the light of the moon, it still wasn't the same as it being daylight. If the noise came from a cougar, the animal might spring at her from out of the undergrowth. She was practically a hung carcass. In the burgeoning light, she wouldn't even see it coming.

No, it was still there, moving slowly. Was it getting closer or moving farther away?

A sudden burst of movement startled her, and Cass sucked in a shriek, pressing herself closer to the tree trunk. But the noise grew fainter. It had left her for some reason, gotten spooked by something, perhaps.

She allowed herself to breathe. Whatever the creature was, it had decided to leave her alone—for the moment anyway.

She doubted she'd be able to sleep that night, not knowing there was a predator out there. What if she didn't hear it coming the next time, and she woke to discover her leg or arm, or even throat in the grip of huge, sharp teeth? The possibility terrified her.

Not long before, she'd been hoping she'd be able to close her eyes and sleep right through the night, and only wake when it was morning. The likelihood of that happening now was slim to none.

Cass stayed as alert as she could, springing back to wakefulness at the slightest rustle of the trees or snap of a twig breaking. But as the hours crawled by, exhaustion, combined with her dehydration, muddled the lines between awake and asleep. She dreamed of giant creatures stalking the outskirts of the clearing, hearing them and sensing their eyes on her, always watching, while she never quite managed to catch a glimpse of them. And she dreamed of seven women standing around her, facing outward, toward the circle of trees, shouting at the monsters to keep them away.