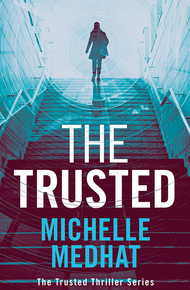 Michelle Medhat (known as Mish to her friends) writes fast-moving, ruthless political spy thrillers blended with thought-provoking sci-fi. Her books are loaded with incredible technologies, but in every case, they're grounded in real science. The reason for this is for 28, she's lived and breathed science, engineering and technology, including programming chips for different bleeding edge applications, established and run technology software companies, developed programmes to bring sci-tech closer to the public, and was heavily involved in the early 90's in bringing to the UK the first notion of technologies we now take for granted, such as film-on-demand (hello Netflix and Prime Video!), pause and rewinding live tv, virtual reality and sensor applications (now known as the Internet of Things). Despite all this sci-tech focus, Mish actually read Business Finance and Law at University, but her love of technology shone through, after she landed a marketing role to support an electronics design business within a University. Love being the operative word, as she met during that interview, her future husband Professor Sam Medhat, who has been her inspiration throughout all her books.

Mish has lived and worked in many places across the world, including Dubai, where she along with her husband, were the co-founders of Dubai University. She currently resides in the UK, and she is Director of Operations and Strategic Development at the UK's professional body for Innovation – the Institute of Innovation and Knowledge Exchange (IKE), which she co-founded with her husband where she helps, government, business and industry and academia improve their innovation capabilities. Over the years, the Institute's Foundation has donated millions of pounds to the science, engineering and technology education sector, and has helped to improve the lives of over 700,000 people by providing educational opportunities. In her spare time (which is a laugh as Mish has none!) - so apart from trying to invent a time machine which gives her some more time, Mish also enjoys writing, reading (thrillers and adventures novels from all genres), painting and singing.

The Trusted by Michelle Medhat

The Trusted is the first book in a series offering a heart-pumping fusion of fast-moving political spy thriller with thought-provoking sci-fi. Readers are calling it "Bond meets the X-Files" or "007 on acid with aliens." If you like your thrillers packed with gorgeous spies, fascinating realms and ice-cold villains, this is a book that you'll devour in one sitting.

MI6 field operative Dr Sam Noor is up against it. His oldest friend is in danger, his colleagues are untrustworthy, and his wife feels betrayed. For so long he's balanced idyllic home and lethal career, but that lie has been uncovered, and his carefully separated worlds fiercely collide. Distraught and conflicted, Noor concentrates on his latest mission and discovers the terrifying truth behind attacks on agents around the globe. With time running out, Noor has to take down the super-terrorists with powerful connections before they unleash their next-gen weapon on an unsuspecting world.

A mind-blowing, suspenseful thriller, with a sci-fi edge, 'The Trusted' by Michelle Medhat tells the story of MI6 operative Dr Sam Noor as he discovers the terrifying truth about the attacks that have been happening on agents around the globe. – Marissa Farrar

A few miles away from Ellie, Sam ran across the tarmac at RAF Northolt to a waiting Jaguar. He climbed into the back seat beside his boss, Sir Justin Maide. The car moved as Sam closed the door.

On seeing each other, they issued convivial greetings. Neither spoke about the heated conversation they'd had several hours earlier. Sam could see Maide wanted to bury it and focus on business. And just forget it happened.

Maide handed Sam his tablet. Sam took it and scanned through the reports, shaking his head.

"A lot's happened since I've been away?" said Sam, reading at speed.

"You're telling me. The PM wants a debrief."

Sam looked up as Maide's eyes hooded, and his voice dropped in timbre.

"You know the summit's almost upon us."

Sam nodded. "Yeah, I know. But we've got more problems."

Sam reached into his pocket and took out a package. It was small, silver, and shaped like a solid molded pen case. Sam flipped it open to show a single phial of orange liquid.

"I got this from Rikard. Dr. Wang, who couriered this package, had rerouted flights, bumping from Beijing, Mumbai, Lagos, Madrid, and eventually Oslo. We'd have missed it if the tech guys hadn't been scanning on tail call signs. This has got to be something big. See if you can get that analyzed before the meeting."

"No, of course not tonight. Can you square it with the PM, and we'll meet tomorrow? By then, you'll most probably have analysis on whatever the hell it is." Sam waved around the silver case.

Maide scanned Sam's face. Sam knew he was under inspection.

Ellie's beautiful blue-grey eyes surfaced in his mind again, and he could hear the pain in her voice. 'You're always somewhere else'. It was true. He was always somewhere else. She never really seemed that bothered before, but when he'd spoken to her earlier, he could feel something. Maybe she was just tired after all the work she'd put in on her new product. But he sensed something was different.

He didn't want anything to break the love they had. He couldn't risk them going down a path that led to resentment and animosity.

"You're off duty tonight, and not just because of the analysis, aren't you?"

Sam looked down and tried to stop the tidal wave of emotions he could feel building, swallowing up any enthusiasm he may have had for a meeting. The compartmentalization that he always used had failed to engage. Maide had read him. He looked in front of him, trying to avoid Maide's eyes.

"It's just with K-" Sam held back, almost at the brink of mentioning Kinley. Maide's eyes narrowed. Concern rippled through him.

Sam shook his head like he was getting his thoughts in order.

"I need to be with Ellie tonight. God knows I never see her."

Sam suddenly dropped his head into his hands. He was aware of Maide glaring at him.

"It's been ten years. And she still doesn't know."

"Yes, she doesn't know anything…"

Maide leaned in toward Sam. "Do you want her to know?" he said slowly, pointedly.

Maide smiled, reassured. "So what do you want?"

Sam's voice trailed off and he stared past Maide at the curtain on the side. The folds in the curtain took on the layers of his life. Underneath each neat turn lay another crease of lies and deceit. Sam thought of everything he'd seen. Everything he'd done.

What did he want?

He wanted his life back. He wanted to live it again, the way he should have done. That's what he wanted.

The driver turned into Silent Waters and Sam made to exit quickly from the car. Then he turned around.

"Look, I've got what I want. You can be sure of that. Sorry about changing tonight but I have to sort this. I'll see you tomorrow," said Sam, embarrassed and acutely aware that he'd revealed a side of himself that his employers never should see.