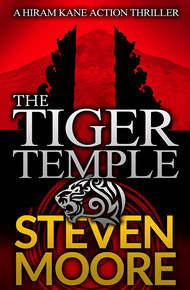 Englishman Steven Moore grew up by the seaside, thus his first true joy was the great outdoors. His innate love of travel and a degree in anthropology, archaeology, and art history help inform his fiction writing. Steven also loves painting, photography, and both playing and watching sport.

The travel bug bit the now perpetual nomad early, and to date Steven has lived and worked on five continents, and visited almost sixty countries. Steven combines an age-old writing adage; Write what you know, with his own mantra; Write where you know, and sets most of his novels in places in which he has either lived or spent an extended period of time.

When not on the road with his writer wife Leslie, San Miguel de Allende, Mexico is home, which they share with their rescue cats Ernest Hemingway and F Scott Fitzgerald (Ernie and Fitz). A lifelong love of food, wine, and beer have demanded a new-found love of yoga and hiking in order to fend off the imminent arrival of middle age.

The Tiger Temple by Steven Moore

A betrayed criminal. A kidnapped child. A deadly race against time.

On the Island of the Gods, world-renowned expedition leader Hiram Kane is on holiday after a long season guiding in the Peruvian Andes.

When a good friend's greed leads him to betray Bali's most notorious gangster, their peaceful community is left shell-shocked after the six-year-old daughter of its leader gets kidnapped in a vicious and violent raid on a peaceful religious ceremony.

What follows is a whirlwind race across the paradise island to rescue the girl before 'The Rooster' takes his sadistic revenge.

With the waking giant of volcanic Mount Agung threatening to destroy them all, will Kane risk everything to prevent a devastating tragedy?

The Tiger Temple is the rip-roaring starter to the internationally bestselling Hiram Kane action thriller series, and will appeal to fans of Clive Cussler, Nick Thacker, Ernest Dempsey, and Russell Blake.

Compelling from start to finish, 'The Tiger Temple' by Steven Moore is a whirlwind race across the island of Bali to save a kidnapped girl from a notorious gangster. – Marissa Farrar

Incense hung thick in the air, its bluish-grey haze adding to the somewhat mystical atmosphere. In the temple's inner sanctum, the organic frangipani scent synonymous with religious ceremonies in the village of Nyuh Kuning permeated every corner.

From somewhere out of sight, the haunting melodic chimes of the rindik musicians added a second layer of mystique. Coupled with the unique architecture, and shrine after shrine laden with flowers and offerings, Hiram Kane was again reminded that Bali truly was the 'Island of the Gods'.

Standing beside Hiram were Ketut and Putu, two brothers who had become his close friends since he'd arrived in their village almost three months previous. Ketut was lean, clean-cut and good looking, and a popular resident of the community of eight-hundred that called Nyuh Kuning home. His shaggy hair gave him the appearance of a twenty-eight-year-old teenager, and Kane teased him for being the long-lost fifth member of The Beatles.

Putu was the older brother at thirty-seven. He was taller and broad shouldered, and handsome in a rugged way, but with watchful eyes and an air of menace about him he was acutely aware of and that had served him well in his younger years. The shaved head and huge tattooed biceps enhanced the look. And yet, despite his tough appearance Putu was lively, quick with a smile, and the type of man who would do anything for anyone. Sadly, that was often to his own detriment.

The physical difference between the siblings was stark, and Ketut's flip-flops were no match for Putu's heavy biker boots. But the love between the brothers was there for all to see. Their mutual respect was genuine and inspiring to Hiram, who, since he'd got to know them better over the last few months, had come to trust the brothers as if they were his own kin.

The colourful ceremony at the pura puseh, the 'Temple of Origin' located in the east of the village, thus nearer to the spiritually important Mount Agung volcano, was to honour the Balinese Hindu God Betara Desa. The annual event was a social highlight of the community, when the men got together to complain about taxes, the cost of scooter fuel and their aching joints, and the women got together to complain about the men. There was, of course, a lot of praying.

Hiram wasn't a religious man, but he'd always been fascinated by religion, a dissonance he was comfortable with. It gave him a chance to witness beautiful art and architecture, and visit peaceful, atmospheric ceremonies and temples such as this.

The three men stood to the rear of the temple. The brothers focused on the words of the priest, while Hiram watched with fascination as everyone present paid their respects to Betara Desa. Even the effervescent children were still and quiet, their attention where it was supposed to be. Hiram felt a deep respect for the serene and innate discipline so evident in Balinese people.

Gazing through the swirling incense clouds and the throng of bodies, he caught a glimpse of a young girl, who happened to turn and catch his eye. Her mischievous smile would have melted any heart, and Hiram had a momentary pang of regret he'd decided not to have kids of his own. But as always, it was gone in a flash. Hiram knew that the adventurous, spontaneous lifestyle he enjoyed and the scrapes he all too often found himself in, plus the dangerous overpopulating of the planet, meant not having kids was one of the few sensible decisions he'd ever made. Besides, he'd yet to convince the long-term yet unrequited love of his life, the beautiful art historian Alexandria Ridley, to even commit to a relationship. So no, Hiram loved kids, but he would leave producing them to other people.

He recognised the pretty little girl in the jade green dress… Ayu? She turned away, but before she did she poked her tongue out at him. He promptly returned the compliment. Before she disappeared back into the crowd the last thing Hiram saw was the stuffed toy tiger that had seemed permanently attached to her hand since he'd first seen her around the village.

The unmistakable retort of gunshots echoed around the temple, but in an instant the place had fallen silent as the worshippers processed the shocking sounds.

A moment later the place erupted in a chaotic chorus of screams and shouts and a crush of bodies as the terrified villagers scrambled towards the exit. Before he could react Hiram felt himself forced back against the inner wall, unable to resist the manic surge of bodies and the flailing arms of the fear-stricken worshippers. Forced back into the same corner, Ketut locked eyes with his friend. Shock and fear were written on his face, his wild eyes telling their own story.

The screaming and surging continued as close to three-hundred people hustled to safety, the unknown gunman still elusive.

"What the hell's going on?" Hiram shouted to Ketut, who remained speechless. "Are you hurt?"

"Ketut? Are you injured?" he pressed.

Hiram glanced among the hordes, finally thinning as the majority of temple goers had at last made it outside.

"I can't see him," Hiram yelled above the still rowdy bedlam. "Let's get out of here."

They joined the last stream of villagers, acutely aware there may still be a gunman in the temple, when Hiram's ears pricked up at the most pitiful wailing he'd ever heard. It was a woman, crying out for… for Ayu?

"Where is my daughter? Where is Ayu?" she howled in her native Balinese. Recognising that final word, Hiram was instantly on high alert. He glanced at Ketut, who had also heard those dreadful cries. With horror Hiram remembered Ayu was Ketut's niece.

With single-minded determination Ketut forced his way through the crowds and burst outside, the sudden bright sunlight momentarily blinding him.

Hiram joined him seconds later, and a moment after that Putu arrived. The man was panic-stricken.

Just then the ascending growl of powerful motorbike engines thundered above the hum of the crowd. Hiram swivelled upon hearing that roaring chaos, turning in time to witness a scene he would never forget; little Ayu being shoved roughly onto a motorbike seat and clamped between the legs of a man. After catching Hiram's eye and holding that glare for a few seconds, the big man pulled down his blacked-out visor and accelerated away from the temple, two other huge bikes right on his tail and scattering bewildered worshippers in all directions.

Without a second's hesitation Hiram grabbed the brothers. "With me. Now!"

Neither Ketut nor Putu had seen what their friend had witnessed, but they knew him well enough by now not to doubt him. As he sprinted off to the rear of the temple towards their own motorbikes, they followed. Less than fifteen seconds later the trio were tearing up the main road through Nyuh Kuning towards the sacred Monkey Forest, on what had suddenly turned into a rescue mission.