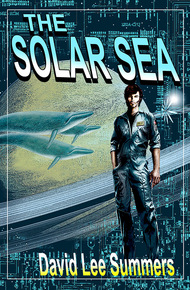 David Lee Summers is the author of a dozen novels and over ninety short stories. His most recent novels are the space pirate adventure, Firebrandt's Legacy, and a horror novel set at an astronomical observatory, The Astronomer's Crypt. His short stories have appeared in such magazines and anthologies as Cemetery Dance, Realms of Fantasy, and Straight Outta Tombstone. He's one of the editors of Maximum Velocity: The Best of the Full-Throttle Space Tales from WordFire Press. He's been nominated for the Science Fiction Poetry Association's Rhysling and Dwarf Stars Awards. When he's not writing, David is paving the way for ships like the Aristarchus, by operating telescopes at Kitt Peak National Observatory in Arizona. Learn more about David and his writing at www.davidleesummers.com

Whales around the world changed their songs the day scientists announced the discovery of powerful new particles around Saturn's largest moon which could solve Earth's energy needs. The Quinn Corporation rushes to build a solar sail spacecraft to unlock the secrets of these strange new particles. They gather the best and brightest to pilot the ship: Jonathan Jefferson, an aging astronaut known as the last man on Mars; Natalie Freeman, a distinguished Navy captain; Myra Lee, a biologist who believes the whales are communicating with Saturn; and John O'Connell, the technician who first discovered the particles. Charting the course is the mysterious Pilot who seems determined to keep secrets from the rest of the crew. Together they make a grand tour of the solar system and discover not only wonders but dangers beyond their imagination.

Jerome Quinn read the latest report from his son with growing curiosity. He sent a message requesting a videoconference.

The trillionaire technology magnate remembered a day fifteen years before when his son—then a slim, wisp of a boy—approached him in his home office. "It's been over a hundred years since the Apollo missions. Humans still haven't gone farther than Mars. Why not?"

"It's a matter of practicality, son," Jerome Quinn had answered.

"What's practicality mean?" Back then, Thomas preferred lying atop grassy mounds on his father's estate late at night looking up at the stars more than sports. His father, who lifted weights and boxed to keep fit, was concerned that his son didn't run and play with the other boys at the private school he attended. In that way, he was very different from his younger brother Henry who took a strong interest in the family business and was constantly surrounded by friends.

"Space flight costs a lot of money." Jerome stood. The light streaming in from the tall window behind his great mahogany desk caused the big man to cast a shadow over the little boy. "In this case, practicality means that people want to make more money than they spend. The two Mars missions cost taxpayers too much money. All people ever saw were some red rocks and fossils of long-dead creatures—and they weren't even interesting creatures like dinosaurs." Jerome had laughed at his own comment, but the boy remained serious.

"What if spaceships could be built cheap? Cheaper than the Mars rockets?" he asked.

"That would be a start."

"What if I could find a way for a spaceship to earn money?" pressed the boy.

Jerome had nodded approval. "Then you might just get me to invest in your dream, son."

Jerome had dismissed his son. The boy turned, sulking to the door. Before he left the room, he'd looked over his shoulder as though he were going to say something, but thrust his hands in his pockets and continued on.

Thomas's face appeared on Jerome Quinn's computer interrupting his memories. As a young adult, Thomas's features had grown angular. Stubble dotted his cheeks and a mop of hair topped his head. "You read the report?" he asked.

Jerome Quinn turned his attention back to the book-sized tome. "I'm still reading it," he admitted. "Have the people on the Moon really discovered particles that can move through time?"

"Not exactly…." Thomas hesitated. "They've found particles that seem to jump into the fourth dimension. The dimension of time."

The elder Quinn waved his scientist son's words aside as though the details were unimportant. He flipped through the dog-eared copy of the report until he came to the page he wanted. "You say that if you had enough of these particles in one place, you could use them to send bigger objects into the fourth dimension, that it might cause them to move forward or backward through time?"

"Theoretically." Thomas nodded. "Although, I'm not sure how controlled such a journey would be. The objects might just disappear from our reality completely."

Again, Jerome flapped his hand in the air, as though the words had a disagreeable smell. "Do you suppose there are more of those particles at our quinitite manufacturing facility?" He pointed skyward.

"Are you asking whether we should mine the Moon for these particles?" Thomas's eyebrows came together.

Thomas shook his head. "There were only a few of these particles … not enough to indicate that there's any great quantity on the Moon itself. It's like they're being generated from somewhere else in the solar system and we're only seeing the ones that pass by the Moon."

"Where in the solar system?" Jerome leaned in toward his computer monitor.

"What would you need to find out?"

Thomas typed something on his keyboard. A graph appeared on Quinn's monitor. "The particles produce a very unique spectral signature in the radio band. I'd need to do a survey using a radio telescope like the Very Large Array in New Mexico."

"Is that facility still operating?"

Thomas nodded. "It's old, but it's a work horse. Most of the time's allocated to small colleges these days."

"The VLA has already performed surveys of the solar system, hasn't it?" asked Jerome. "Can't you use archival data? It would save us some money."

Thomas sighed. "I've looked. There have been some broadband surveys near the spectral region, but nothing that exactly overlaps this—nothing that helps."

"Very well, then. I'll get you some observing time." Jerome reached out to terminate the connection, then paused. "The Quinn name could attract attention from competitors. You should use an alias as you continue this research."

Thomas considered that, then nodded. "I can do that."

"Dad," interjected Thomas before Jerome could terminate the call. "May I ask what you plan to do if we find more of the particles?"

Jerome regarded his son for a moment, then took the report and flipped to the final section. "You're the one who gave me the ideas. Experimenting with time travel is one possibility. It would certainly bring us some good press."

Thomas's face went pale as he looked away. He licked his lips. "A weapon is another … you could send an enemy into the fourth dimension. They might disappear forever."

Jerome stood and walked to the window, letting his son see only his back. "No matter what the application, if you find those particles, you'll have helped Quinn Corp more than you can imagine. It'll stand you and your brother in good stead. Weapons make a lot of money for the manufacturer."

"I think Quinn Corp would get better press from a time machine and it could bring us still more money," argued Thomas, sounding uncertain. "The particles could even open the door to interstellar travel if they unlock access to other dimensions."

Jerome turned and smiled. "I like the way you think. I always have. No matter what the application, those particles will easily increase Quinn Corp's worth ten-fold. If you find them, how do you propose to get them?"

Thomas stammered as though caught off guard. "We'd need a spaceship…," he said after a moment.

Jerome sat and eyed his son carefully. "Is this like that solar sail you once told me about?"

He remembered a day when his teenaged son brought a set of crudely drawn blueprints to his office and dropped them right on top of a stack of papers in the center of the great mahogany desk.

Jerome had looked up from the computer. "What's this?" he harrumphed. Several investors had recently pulled out of Quinn Corp when earnings did not come in as high as expected. In spite of Jerome's hard work to recover his losses he saw the boy was anxious to show off the blueprints.

"Plans for a heliogyro." Thomas had proudly pointed to the top sheet of the plans. The drawing looked a little like a flower constructed of steel beams and aluminum foil.

"What's a heliogyro?" Jerome Quinn inclined his head as he studied the plans, relieved to think about something other than investors.

Fifteen-year-old Thomas Quinn had grown tall, but remained rail-thin. "A heliogyro is a spaceship. You might call it a sailing ship to the planets. The crew quarters are in this ball in the center." He pointed to the picture. Then he pointed to the 'petals' of the flower. "These are giant reflectors made of spun aluminum mounted to a quinitite frame." He referred to the lightweight plastic with a crystalline structure that had revolutionized the computer industry and made Jerome a fortune. "Sunlight could push this ship all the way out to Pluto. When the crew was ready to return, it would just need to slingshot around the last planet in its voyage, adjust the sails, and it would be homeward bound. Sunlight also makes the ship spin like a giant pinwheel, so the crew would have simulated gravity."

"Sunlight?" Jerome had rubbed the bridge of his nose. "If it's a sailing ship, wouldn't it be pushed by the solar wind?"

Thomas had rolled his eyes. The mannerism irritated his father then—it still did, for that matter. "The solar wind's just charged particles, it doesn't produce enough energy to move the ship."

Jerome folded his arms across his chest, not appreciating Thomas's tone. Thomas stood his ground, well aware that an employee would have been dismissed by now. "If it's propelled by sunlight, I'm guessing this thing wouldn't go very fast."

"Theoretically, it could get to Mars in about six months … to Jupiter, about a year after that … beyond that, it depends on planetary alignments, but with gravitational assist from Jupiter, the ship could make it to Saturn in as little as six more months…."

Jerome remembered snorting and shaking his head. "I applaud your imagination, son, but it all sounds like science fiction."

"No, it's not. The Planetary Society launched LightSail 3 in 2024, but it had problems because of heat absorption. Carnegie Mellon University built a nanosatellite using an improved design back in 2028, but it was expensive because they used Mylar for the sails. Your quinitite allows us to use fine aluminum fiber which we can produce cheaply in our lunar factory—the quinitite in the frame would help the craft dissipate heat," said Thomas, hopefully.

"How much would it cost?" For a moment, Jerome had been caught up in Thomas's dream.

"I think we could build this ship for about ten billion dollars." Jerome remembered how proud Thomas looked that he'd completed a financial analysis despite his distaste in financial matters.

"But it's only a fraction of your fortune, dad," pleaded Thomas.

"What would I get in return?" Jerome Quinn narrowed his gaze at his son. He needed to get him to see the practical side of the equation. "Ten billion dollars is too much just to throw away. You've got to tell me how I'll benefit from this."

"The solar sail?" asked Thomas. "Yes, I've improved the design over the years. Just give the word."

Jerome held up his hand. "Start by finding those particles. If they exist, give me a budget for the ship."

Jerome Quinn reached over and terminated the connection, then sat back and folded his arms.