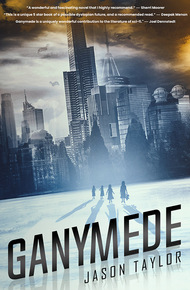 Jason Taylor spends his life in the mountains and at sea. Though he is a native of Montana, coastal BC is his second home. He has a background in computer science and physics and is a voracious reader of all things science fiction. His writing explores the themes of what makes us human and the questions surrounding our place on this planet, both now and in the future.

The Great Unrest nearly purged humankind from the world. In the aftermath, artificial intelligence permeates every facet of life. Manipulation of the human genome spurs a global arms race to produce the first human clone. When Jill finds the key to unlock this secret, the Ganymede Project shatters everything she thought was real.

After confronting the unintended consequences of her discovery, Jill is cast into a bewildering maze of intrigue and deceit. The result of her research plunges the world into chaos, forcing her to face a future where humans may lose all that remains of their humanity. Haunted by clone children with unexpected powers, tortured by uncanny dreams, and driven by the whims of an unstable AI, she will do whatever it takes to contain the turmoil that she has unleashed.

Standing in the kitchen, her preparations complete, Mary knew she should take a moment to enjoy the calm before the coming storm. Elizabeth was in her bedroom playing with her toys, the presents were wrapped, and the cake was cooling on the counter. She pointedly ignored the swarm of news-drones at the end of the block. She would take a moment for herself.

She knew she was too old to be the mother of a seven-year-old. But that was the whole point, wasn't it? It was because she couldn't conceive that she'd chosen this route. The protests, the blaring headlines, the violence in the streets, none of that mattered, not when compared with the miracle of her perfect seven-year-old girl. Of course she was perfect. She was a marvel of science, the shining outcome of the largest research project conducted in the history of mankind.

Mary placed her palms flat on the countertop, looked out the window over her garden and smiled. She was content. More than content. She was for all intents and purposes immortal. If that wasn't satisfying, she didn't know what was. When she'd been chosen as a participant in the human trials, she had felt unbelievably lucky. She could finally have the child she so desperately wanted. In a burst of exuberance, she'd nearly given her daughter the same name as herself. But it had seemed like a step too far, an expression of arrogance that might tempt fate and tip them both into disaster. In the end, she decided that Elizabeth should be her own unique person and clones shouldn't be named after their parents, so she'd been given her own name.

The view out the window flickered, interrupting Mary's thoughts, a panorama of dense, grey buildings suddenly bleeding through the garden and fruit trees in her backyard. The failure surprised her; she'd never been subjected to an unfiltered view without authorization before. She closed her eyes, focused her attention on her network interface, and reinstated her preferred filter. The buildings blurred and fuzzed then blinked out of existence, her backyard returning to greenery.

She watched for a minute longer to see whether the filter would reveal additional instability. When she was satisfied that her preferred reality was solidly back in place, she turned away from the window. "Elizabeth! Come down! Are you ready for the party?"

When Elizabeth didn't respond, Mary's face creased into an unaccustomed frown. She walked through the dining room to the long, white-carpeted stairs, and called up to her daughter's room. "Elizabeth, can you hear me?"

This silence was unlike her. Elizabeth was usually so responsive. Maybe it had to do with turning seven? Mary thought back to her own seventh birthday. Had she been worried about turning seven? She honestly couldn't remember.

Mary checked her watch. There was plenty of time, still thirty minutes until the first guests would arrive. She walked up the stairs to the second floor, trailing her fingers along the hand-rail. She stopped at Elizabeth's room and placed one hand tentatively on the door. "Elizabeth, can I come in?"

The room was silent.

A sharp pang of anxiety spiked through her. The feeling was there and gone in an instant, a liquid flutter in her stomach. She didn't know where the feeling had come from, but over the years she'd learned to trust her intuition. Right now, the silence emanating from her daughter's room was ominous.

"Elizabeth?" she called through the door, her voice louder and more concerned than she would have liked. She prided herself on her ability to remain calm under fire, but here she was falling apart over nothing.

She waited a moment longer and when there was still no response, she made up her mind. She pushed the door open and entered the room to find Elizabeth sitting cross-legged in the middle of the floor, a doll in each hand, head down, hair falling in loose cascades over her face.

Mary took a deep breath, one hand on her chest to cover the frightened beating of her heart. "Honey, is everything ok?"

Elizabeth was oddly still, nothing like her usual boisterous self. Mary forced herself to stay calm as she crouched down in front of her. Revealing her anxiety would just scare the child. Elizabeth was so sensitive and easily influenced by the feelings of those around her.

But there was no reaction. No motion at all.

Mary pushed her daughter's thick brown hair back away from her forehead, revealing her eyes while she surreptitiously checked for a fever with the palm of her hand.

"Are you nervous about your birthday party?" Mary asked.

At first Elizabeth didn't respond, and for a long, pregnant moment the room was utterly silent. Then she lifted her head and looked Mary in the eye. "Who are you?" she asked, her face twisted with some intense emotion. It was an expression Mary had never seen on her daughter's face before. Her anxiety returned, sharp and cruel, twisting within her. Something was wrong. She had known it all along. Elizabeth wasn't well.

"Honey, listen to me. Do you feel sick?" Mary asked, tripping over her words in her concern.

Elizabeth's eyes darted around the room before returning to Mary. "Why are you keeping me here?" she asked.

"I'm not keeping you here. It's time to get ready for your friends. Everyone will be here soon for your party," Mary explained, trying to inject a sense of normalcy into the conversation.

"Party? Where the hell am I?" Elizabeth asked, her voice rising.

Mary pressed her hand to Elizabeth's forehead again. It was still cool to the touch, but that wasn't enough to alleviate her concerns. Taking a deep breath, she picked Elizabeth up. It was time to take her to the doctors at the lab. They had told her that if anything unusual happened she should bring Elizabeth to them immediately. This definitely qualified as unusual.

As soon as Mary picked her up, Elizabeth started to struggle, kicking viciously and twisting to get free. In a blind panic, Mary rushed toward the stairs, one hand gripping Elizabeth around the middle, the other grasping the hand-rail as she fought for control.

Partway down the stairs, Elizabeth suddenly went limp. It was such a surprising change that Mary stopped in her tracks, fearing the worst, the animal part of her brain crying out in shock and alarm. But she found that Elizabeth was looking at her calmly now, her eyes flat as she spoke.

"What is it, darling?" Mary responded, trying desperately to keep the rising panic out of her voice.

"We need to go back to the lab, honey. It's important."

"Put me down," Elizabeth repeated, her voice taking a deeper tone, commanding now.

At that moment, Mary's mother, Elizabeth's grandmother, opened the front door and bustled in. "Hello, sweetheart! Happy Birthday!" she called out. She was carrying a bag of presents, beaming up at them where they were standing on the stairs, unaware that anything unusual was going on.

"Mother! Thank God you're here," Mary began, but she didn't get a chance to finish, because at that moment Elizabeth grabbed a metal chopstick from her mother's stylish bun and stabbed it into the exposed flesh between Mary's neck and shoulder.

For one long moment, Mary gawked at the end of the chopstick sticking out just above her dress line. Blood welled up and ran down her chest. Then her legs gave out and she toppled forward, falling down the stairs toward Grandma, who stood at the bottom, eyes shocked, mouth open, a silent scream stuck in her throat.

As Mary fell, Elizabeth broke free, pivoted in the air, and landed cat-like at the bottom of the stairs. Then she knelt over her mother's prone form and reached out with one small hand, her fingertips caressing the chopstick where it emerged from the base of her mother's neck.