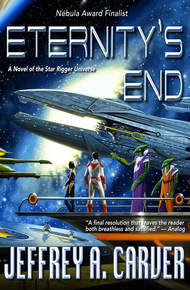 Jeffrey A. Carver is the Nebula-nominated author of 18 novels, including the ongoing Chaos Chronicles. Equally popular are his Star Rigger stories, including Eternity's End. His work treads the borderland of hard SF and space opera, but his greatest love remains character, story, and a healthy sense of wonder.

A native of Huron, Ohio, Carver lives with his family in the Boston area. He has taught writing in a variety of settings, from educational television to conferences for young writers to MIT, as well as his own workshops. He has created a free web site for aspiring authors of all ages at www.writesf.com. Learn more about the author and his work, follow his blog, sign up for his occasional newsletter, and see all of his books at: www.starrigger.net.

Eternity's End by Jeffrey A. Carver

A starship lost in eternity. Ghost ship Impris, which disappeared during the War of a Thousand Suns, is the stuff of legend. Her very name conjures the perils of interstellar travel. But no mere legend, she is real—glimpsed on occasion in the hyperdimensional Flux, and then gone. Her passengers and crew live on in a strange limbo, their fate hopelessly caught up in quantum defects in space-time, interstellar piracy, and galactic coverup. To the pirates of Golen Space, she is a perfect lure, drawing passing ships to their doom. Many innocent star riggers have been captured in such raids and forced to pilot for the murderous pirates.

One such rigger, Renwald Legroeder, makes a daring escape and flees to the presumed safety of the Centrist Worlds. But instead of finding asylum, he is framed for treason. Something is terribly wrong in the Guild of Riggers and the government that should be protecting him. To clear his name—and perhaps to avert a disastrous war between worlds—he must escape a second time, and partner with the amphibious Narseil to return to the Deep Flux and search for the lost Impris. Legroeder's journey takes him back into the heart of raider territory, where he encounters a bewildering array of motives, conspiracies, and even deep-cyber romance. Forging friendships and finding love in the unlikeliest of places, Legroeder must nevertheless put his life on the line to protect the innocent, and preserve a shaky interstellar peace.

Eternity's End stands as a highlight of the Star Rigger saga, and one of Jeffrey A. Carver's most memorable novels. Finalist for the Nebula Award.

STREAMERS OF light seemed to coil in slow motion through the corridors of the starship.

The passengers and crew moved in great straining ripples as they walked through the ship, carrying on the business of living, if living you could call it.

The passengers breathed and ate and slept, and socialized after a fashion. And the crew carried out their duties, seeing to the needs of the passengers, repairing machinery, and tending the makeshift hydroponics gardens that supplied the nutritional needs of the five hundred-plus souls on board. The riggers on the bridge continued to search the skies for a way home, peering into the bewildering mists of the Flux and wondering what in the name of creation had gone wrong. Their lives consisted of ennui and bewilderment, interrupted at long intervals by heart-pounding excitement when they sighted another ship... followed inevitably by piercing despair, when their efforts to make contact ended in failure.

It was a strange and terrifying limbo, here where the starship floated, trapped in some enigmatic layering of the Flux, exiled from the "normal" regions of the Flux—never, it now seemed clear, to restore contact with the universe of its origin. Time had ceased to flow in a rational or comprehensible manner. It wafted through the ship unpredictably, a drafty breath sighing through unseen holes in the walls of eternity.

Among the passengers was the Jones couple, married on the ship two days after departure, who now passed their time in each other's arms—not in perpetual bliss as they had once imagined, but huddled despairingly in their cabin where time, through some twist of fate, had slowed to an even more glacial crawl than elsewhere on the ship. There they found, if not hope, then at least a hint of sorrowful consolation in each other's company, as their bodies lay entwined in near-stasis.

In the lounge one level down, a pair of old men played the same game of chess they'd been playing for who knew how many years. Had they ever gotten up to eat or sleep? No one could quite remember. The ship's captain seemed always to be nearby, moving more speedily than the chess players and yet without aging, stumping up and down the corridors, muttering to himself like a tormented Ahab of the stars.

And in his own cabin, the tailor stared for the thousandth time at a slip-needle and bind-thread as though he had just now found them in his hand. His movements stretched out in ghostly projections; he felt as if his life were hardening in amber. He could not fathom what was happening, and had long ago given up trying. And yet, even as he worked, his thoughts reached out to his sister and her family. It was their homeworld he had been bound for, their home lost now across the twin gulfs of time and space. He no longer held any hope of seeing them again, but he could not stop wondering how much time had passed on the outside, and whether anyone he had known off the ship was still alive.

With a prolonged sigh, the tailor drew the slip-needle in a slow, glittering slide down the shoulder seam of the coat he was altering. The seam split, and came together again a centimeter to the right. He studied the results for half a lifetime... and then, with great deliberation, moved on to the next stitch.