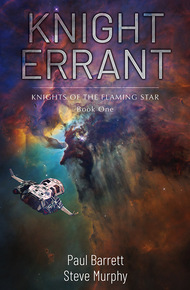 Steve Murphy put on his first uniform at age 19, starting with four years in the Navy and a stint in the Army National Guard. Steve then spent 23 years as a police officer, 14 on the SWAT team and 9 as a sniper. After retiring from the force, he swore his next job would allow him to dress however the hell he wanted to. So he became a writer, which can be done in pajamas while drinking bourbon.

Steve currently lives on a 12-acre farm somewhere in North Carolina with his wife, two dogs, and a cat. That is about to change and he may soon be homeless, living under a bridge with the people mentioned above, and a troll named Sam.

Paul Barrett has worked a variety of jobs in his life, but the two that make him happiest are writer and motion picture producer. He has produced four films and worked on a variety of cool television shows. His films include Cold Storage and Night Feeders.

When he's not writing, Paul enjoys board gaming and watching great TV shows. He lives in North Carolina with his graphic artist husband and three cats.

Steve and Paul have known each other since 1982, when Paul bribed Steve with a roll of quarters to give him a ride home on his motorcycle. Paul really wanted to ride a motorcycle. Somehow, they became instant friends, which speaks to either Paul's winning personality or Steve's love of quarters. Combined, they have written five novels and four screenplays.

You can email the guys at [email protected]

Some days your past just won't stay buried, not even among the stars…

The Knights of the Flaming Star are an elite space mercenary company, one of the best in the business, no matter which star system you're in. But when an old friend turned arch-nemesis lays a careful trap for them, their leader Hawk falls right into it.

Well, he never could resist a pretty face. Or a good fight. And now he's got both.

The Knights go from one end of known space to the other hunting down the people who are trying to smear their good name, chase down the folks that want to kill them, and maybe. Just maybe, bury the ghosts of their past once and for all.

Hawk checked the screens one last time, and then looked at Gerard, who sat in the pilot's chair, a silver cap on his pale hair, thin wires plugged into his cybernetic arm. "Everything good?"

Gerard nodded. "Just like the first four times you asked me."

Hawk chuckled. He always acted like an overprotective mother when they headed into ripspace, despite Gerard being one of the best rip pilots alive. Both Ship and Gerard constantly checked their calculations, and Gerard handled the physically and mentally demanding task of piloting rip space with greater aplomb than his frail-looking body would indicate. Hawk hated not knowing how to fly the currents, but he didn't have the requisite physical and mental makeup. Once, maybe. No longer.

Hawk shied away from that thought.

Hawk left the bridge. A seven-meter walk brought him to the bunkhouse. He stepped in to find Wolf and Ashron laid in their "bunks," padded niches cut into the light blue wall. Thomas occupied one of the three extra beds in this room. Two cuffs hung from clear tubes beside each bunk. The devices that would administer the "good time shots" as Hawk called them. Wolf and Thomas already wore theirs around their right arm and Laura stood over Ashron, attaching the thick strips of black plastic to his muscled bicep.

"Last minute trip to the head," Laura said. With cuffs attached to Ashron, Laura tapped a keypad on his bunk, setting the dosage she had calculated for the trip.

She turned to Hawk. "You ready to lie down?"

Trey's tenor voice came out muffled through the door. "Go ahead and jump. I'm going to stay in here."

"You know we can't do that," Hawk said. "Everyone has to be under."

Hawk turned to Laura and saw his puzzlement reflected in her face. Trey had never shown any disobedience. He knew the importance of this procedure as well as any spacefarer and had done it numerous times without complaint. Hawk tried to open the door and found it locked. "Ship, unlock the door."

Laura stepped up. "Let me."

Hawk stood aside as Laura slid the door open. This was one of the smaller heads aboard Ship, a cube barely a meter square with a toilet and sink. Trey, dressed in a loose red shirt and blue pants, had squeezed into the far corner and wedged himself behind the toilet. His bloodshot eyes were wide with terror.

"Stay away!" Trey blurted before Laura moved. "I don't want to sleep."

"You know you have to be asleep when we rip." Laura used the tone of voice Hawk had heard her use to great effect on others in distress. "If you're not asleep, you could die." She took a step forward. Trey tried to push himself even flatter against the wall.

"I'm sorry." Trey squirmed in the corner. His face turned red and eyes puffed as he drew close to tears. "I've tried to be strong. Tried to fight it. But I can't take the dreams anymore."

"Yes, you do," Trey said, his voice high and eyes haunted. Instead of a child on the verge of his teens, he resembled a terrified six-year-old. "Terrible dreams of monsters that want to kill you and eat you."

"Unless it is," Gerard said. Hawk turned in surprise to find his pale friend standing behind them, a thoughtful expression on his pale face. "Trey, in these dreams, do you see large creatures swimming, circling you in a void?"

Trey's eyes widened. He nodded. "Yes. They're terrible. They want to kill me."

"If I can tell you how to avoid them, will you come out?"

Trey hesitated, hands clenching and tugging at his shirt. He started to slip from behind the toilet, then stopped. "I can't. What if it doesn't work?" Tears poured from his eyes.

"We don't have time for this," Hawk said. He stepped into the bathroom.

Trey stood up and appeared ready to dig his way through the wall. As Hawk approached, the boy wailed, strangled cries punctuated with shouts of "no." He swung his fisted hands wildly. Hawk grabbed at Trey's thin arms, caught them, and pinioned them against the wall. Trey screamed and thrashed, his efforts to kick Hawk thwarted by the toilet.

"How can he stop the dreams?" Hawk asked over his shoulder.

Trey stopped his struggle and gave Gerard a perplexed stare. "What?"

"Multiplication tables. They'll occupy your mind and keep the dreams away."

"That's the short version, but—"

"—The short version will have to do. Sedate him."

"That's an order!" Hawk said. He kept his face stern even as he winced inside at the anger in Laura's eyes. He hated treating Trey like this, but the lives of four other people depended on the Knights, and time was crucial. He didn't have the luxury of coddling. They needed every minute they could get. Trey understandably had many issues; this was new. Hopefully Gerard and Laura could help the boy after they came out of rip; for now, they needed to move.

With stiff steps, Laura walked into the room. Her face and movements as emotionless as a robot, she pulled a syringe tube from the small medkit on her belt. She dialed in the dosage as Trey flailed.

"Please don't," Trey whimpered as Laura brought the tube to his arm. Hawk saw the briefest slip of her resolve before her detached face reappeared. He detested himself for forcing this upon her.

She hit the inject button. Trey stopped his struggle and stared at Laura with a heart-wrenching mixture of confusion and betrayal.

"I hate you," he said, his words slurred as the sedative took hold and his head slumped forward. Head down, Laura left the room. Hawk picked up Trey's small form and carried him to his bunk, where Laura stood holding the black cuffs.

"You understand, don't you?" Hawk said as he gently laid Trey into the bunk.

"Yes," Laura answered as she attached the cuffs, her voice flat. I understand, even if I don't accept, the tone said.

Hawk looked at Gerard. "You can talk to him when we're in transit."

"If he'll talk to any of us," Gerard said. He left for the bridge.

Hawk knew defending himself would waste the time he was trying to save by his reprehensible action, so he let it go. They were mad at him. They understood his reason, even if they didn't approve of his methods. It was Trey he would have to reconcile with. Time to sleep now and beg for forgiveness later.

He slipped into his bunk. Laura, without a word, placed the cuffs on his arm and dialed in the dosage for the tranquilizer and restorative.

When she finished, she walked to her bunk, attached the tubes to the cuffs already around her arm, and entered her dosage. She plopped into the bed. Her brown eyes still hard and face glum, she gave Hawk the thumbs-up.

Ship continued the countdown. At eight, Hawk heard a series of clicks and whooshes as everyone's tranquilizer cuff activated. A slight pressure on his arm told him the compressed air had fired trazine into his body.

"All cuffs activated," Ship said. "Rip is go in five…four…three…"

Hawk succumbed to the drug's effects. The world went black.