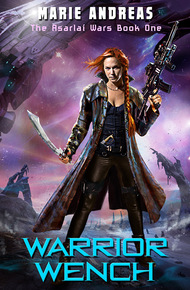 Marie is a multi-award-winning fantasy and science fiction author with a serious reading addiction. If she wasn't writing about all the people in her head, she'd be lurking about coffee shops annoying total strangers with her stories. So really, writing is a way of saving the masses. She lives in Southern California and is owned by two very faery-minded cats. She is also a proud member of SFWA (Science Fiction and Fantasy Writers of America).

When not saving the masses from coffee shop shenanigans, Marie likes to visit the UK and keeps hoping someone will give her a nice summer home in the Forest of Dean or Conwy, Wales.

Vaslisha Tor Dain is a mercenary starship captain with a few simple rules: A good ship is better than a great man, in case of confusion always err on the side of blowing someone's head off, and never fall for a telepath or a member of her crew.

All of those are about to bite her in the behind.

Vas's life takes a turn for the worse when she comes back to her crew after what should have been a two week pleasure trip to find out she's actually been gone a month and has no memory of missing time. Her beloved ship, The Victorious Dead, has been sold for scrap and its pieces scattered throughout the galaxy. In addition, there are unmarked ships blowing apart entire planets and the Commonwealth government can't, or won't, stop them.

And that's just her first day back.

Vas has to fight her crew, the Commonwealth, and a mysterious cadre of warrior monks to get her ship back and save a universe that may not want to be saved.

She hated gambling. Her money was earned at the cost of lives. The idea of wasting that money didn't set right with her.

The cool night air smelled fresh and clean once she got away from the landing pad. That is, until she approached the mass of giant buildings known as Liltikin. Not really a city in the proper sense, Liltikin was a collection of massive casinos that cooperated for mutual benefit. Each one was a kingdom unto itself with its own unique style and odor. Moreover, all of those smells hit her about a hundred yards out from the first behemoth.

Stepping inside the casino, she knew her second-in-command wouldn't be in there. He had a level of class that warred with his chosen lifestyle. The flashy pink signs, horrific pink carpeting, and pink–colored air didn't even come close to Deven's requirements. She wasted a few seconds wondering just how or why someone would color air. Shaking her head, she fled for the next casino.

The second den of ill-lost funds appeared promising. The open entry was wide enough for a small shuttle to dock and provided a view of the elegant interior. Light golds and sea blues dominated the color palette, with a few dark wood accents on the ceiling and far walls. Carefully draped fabrics from thousands of worlds flowed from the five-story-high ceiling to be gathered against the walls creating a space both intimate and generous at the same time. The gambling tables were all carved out of pure rare stones. The five-card ta-long table immediately before her was once a single block of rare Elierian jade. The fast-paced calir game table gleamed an ebony that could only have come from a single lump of Wavian coal, a substance so protected that a single ounce could buy a fleet of ships. The entire decor invited those of delicate sensibilities to come in and donate their money.

She definitely didn't fit in.

For the first time she realized she still had on the clothes she'd worn yesterday. And her duster carried more than enough proof of its name. She couldn't remember when she last braided her hair; but the telltale red wisps near her waist told her it had been a while. The sneer on the face of the casino host told her the same thing. She glared back. Robots should never be programmed with facial expressions.

She held up one hand instead of reaching for her blaster, as she wanted to. "I don't want any trouble and I'm not staying."

The skinny droid rocked back on his metallic heels.

When the droid didn't say anything, she continued, but kept her voice low. "You don't want me here; I don't want to be here. I'm trying to find my second-in-command. The sooner you help me find him, the sooner I can stop leaving dust on your floor, got it?"

A faint humming emanated from the yellow man-shaped machine, and it nodded. "Agreed. Who is it you are searching for? What does he look like?"

She did a quick surveillance around the gambling floor even though she knew Deven wouldn't be there. His gambling usually took place in private rooms. As a rule telepaths, or espers as they were commonly called, didn't like crowded spaces. Deven might be different from most espers, but he had reasons for gambling alone.

"He's about 6'2", a bit taller than me, pale gold skin, likes to show lots of it, and has tar-black hair hitting past his shoulders unless he hacked it off again. He'd probably be in your tao-go room or a private suite." She'd give the thing Deven's name, except that he never used it on casino planets.

The droid cocked its head, another annoying mannerism, and then froze. An instant later it turned in her direction. "I believe I have found your friend. He is indeed in a private suite." The droid's eyes gave pale reflections of the images he scanned. Most likely tapped into the security cameras. "You did not say he was an esper."

She frowned when an image of Deven entering a suite appeared on the droid's eye-screens and focused in on the two linked metal bracelets on Deven's right wrist. No esper above a level one could travel without them. The laws may have given them equal rights eighty years ago, but that didn't mean people felt safe around them. Which was one reason that Deven usually wore a heavy inlaid bracelet over the telepath-blocking metal bands.

"I don't think that's a concern. He's not breaking any laws; you obviously have seen the bracelets." She folded her arms and glared at the droid. Not really at the droid, more at the small army of security most likely watching her every move through the droid. "Tell me, droid, is there a problem here?"

"Not a problem. However, he will leave with you, yes?" The droid turned on a metal heel and quickly strode toward the depths of the casino where the private rooms were.

Vas jogged to keep up with it.

The droid's sharp rap on the door lead to muffled swearing in two different languages. Which told her two things: they'd found Deven, and he wasn't gambling for money.

Her second-in-command had many appetites.

She stepped around the droid and added her own pounding to the door. "Deven, it's me. Get your ass out here." She paused, and added, "Clothed. Get your clothed ass out here." Better to be safe. He preferred stark naked.

An increase in the swearing signaled his acknowledgment of her command. The door swung open and a curvaceous blonde stumbled out of the room, a dazed glow on her face. Obviously, Deven had been the one making the extra cash in this scenario.

Her second-in-command was next through the doorway, looking as fresh as if he'd had time for an hour-long sonic shower before he dressed. Tall and exotic looking, Deven seemed to glow himself as he came out of the room. His standard issue flight suit looking like he'd had it personally tailored to fit his body like a glove. He'd always been good looking, but he seemed different now. She shivered. Maybe absence did make the heart grow fonder. However, it certainly wasn't going to make her break her rule about getting involved with a member of her crew. Or a telepath.

Deven's sharp green eyes glinted with mild amusement at whatever he thought was going on in her head. Then he smiled and pulled his hair into a ponytail at his nape.

She hated him for always looking perfect. No matter the situation, Deven stayed calm, clean, and relaxed. Somehow, she was sure he did it to piss her off. Maybe that anger could chase off whatever other unhealthy feelings were going on in her head.

"We've got a problem, a job, and a missing crew." She didn't wait for him to respond before she marched toward the casino floor.

She didn't hear his steps, but the powerful presence at her side told her he'd caught up.

"You were supposed to be here two weeks ago."

"Yes." A two-foot-tall Jerlian in a permanently wrinkled suit, sloshed synth-cohol on her boots as he tried to hug her knees. Had Skrankle not already managed to ruin said boots, she would have seen how far she could kick a Jerlian on a low-grav planet. Instead, she took two steps around him and moved toward the exit.

"No, I didn't. My being late has nothing to do with you or our next job. Can we move it, please?" She didn't want to discuss her recent travels, and certainly not in the middle of a casino. Nothing had happened. She was just late. There just wasn't a reason to talk about it. She squashed the tiny voice that said she needed to talk about it.