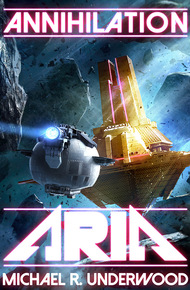 Michael R. Underwood is an author, podcaster, and publishing professional. His works include the Ree ReyesGeekomancybooks, the r/Fantasy Stabby Award-finalistGenrenautsseries, Born to the Blade, and Annihilation Aria. He's been a bookseller, sales representative, and was the North American Sales & Marketing Manager for Angry Robot Books.

Mike is a co-host of actual play podcast Speculate! and a guest host on the Hugo Award-finalist The Skiffy and Fanty Show. Mike lives in Baltimore with his wife, their dog, and an ever-growing library. He loves geeking out with games and making pizzas from scratch.

Michael R. Underwood is a Hugo Award Finalist as part of the cast of The Skiffy and Fanty Show and his Genrenauts series was a r/Fantasy Stabby Award-finalist for Best Serialized Fiction.

A woman who can wield a weapon like a song and her voice like a weapon. A man who can out-think any problem. A pilot who can outmaneuver the best of them. Lahra, Max, and Wheel live and work aboard the Kettle, salvaging artifacts from dangerous galactic ruins to keep scraping by.

But those artifacts can unlock an ancient power which threatens the iron-fisted rule of the galaxy's imperialist overlords, the Vsenk. To protect their dominion, the Vsenk have humbled entire civilizations. They eat ships like the Kettle and her found family for breakfast.

Lahra, Max, and Wheel are each just trying to get home to the lives they lost, but they'll have to evade space fascists, kick-start a rebellion, and save the galaxy first to do it.

Max Walker was very good at running for his life. He had plenty of motivation, given the ravenous horde of purple space locusts nipping at his heels. He cradled the mapping device in his arms, shielding it from the locusts. Dying would be bad. Coming out empty-handed wouldn't be much better.

It was that kind of day. A "you really should have come up with a better plan, but hindsight is 20/20, and hey, you've got a kickass wife with a giant sword beside you, so it's not all bad" day. Unfortunately for Max, those days were pretty common. But hey, he hadn't died yet.

Lahra Kevain, said kickass wife, ran beside him, keeping stride, though she could have easily lapped him any time she wanted. Lucky for him, she'd decided that she liked him enough to save him from the aforementioned horde of space locusts. Even wearing a twenty-kilo set of EVA-capable armor, Lahra moved with impeccable grace. It made sense though, since she spent more time in her armor than out of it. A soldier-caste Genae, Lahra was made for battle. Even when she was running for her life, she wasn't really worried.

As far as he could tell.

They fled the tomb so fast that Max could barely maintain his mental record of the turns and doorways and puzzles that had taken them hours to work through on their way in.

But now, there was only running. And holding onto the mapping device, which would maybe, possibly, hopefully give Max and Lahra the information they needed to finally make real progress on their respective missions.

One of the locust beasties ripped a chunk off the heel of his space suit. Air bled out like a whoopee cushion, and his O₂ gauge started sagging.

"We need to run faster!" Lahra said, still calm despite the odds.

"This is me running faster!" Max replied through huffs and puffs.

Max kept his eyes forward even as he felt the beasts scraping at his heels and crunching beneath his feet. They were gaining.

None of this would have happened if the tomb had been properly sealed. But no, some grave robbers had gotten to the site before them and screwed everything up. Great job, assholes. He'd refrained from kicking their skeletons. It wouldn't help.

"Keep going!" Lahra said, and he felt her drop back.

"Lahra, no!" The vid feed from Lahra's suit showed the horde of locust beasts swarming her, the screen filling with the purple creatures and their black teeth.

"Die, beasts!" she shouted, her scattergun barking death in every direction. "Wheel is just around the corner! I will catch up."

More gunshots. More dead locusts. But the next sound was different—a cry of pain from Lahra.

Max hailed their pilot, Wheel, on the ship. "We got swarmers here. Need a hot extraction."

He could see more of Lahra in the diminished cloud of locusts, her armor gouged and slashed in dozens of places. But the smile on her blue-hued face told him she'd be fine.

"Hit the wall!" she called. Max dove to the side. It'd only taken a few months to accept that in a fight, Lahra knew best.

A blast from the scattergun disintegrated another chunk of the swarm, and Lahra burst free, the creatures fading into the shadows.

She staggered forward, swatting away a few stragglers. "Get us out of here, now!"

They took the final corner and ran down the rest of the hallway. Max's O₂ gauge was tickling the red.

The Kettle's forward lights flashed through the small passageway Lahra had dug through the rubble. It had only been a few hours, though it felt like days.

"Standing by. One of these days, you kids are going to walk leisurely out of a tomb, arms full of loot and not pursued by anything."

Max chuckled. "We wouldn't want to give you a heart attack."

"I mean, if that did happen, those nanites would just jump-start you, right?"

"Better to nail the jump than count on the net, kid."

Lahra's feet pounded on the floor of the temple foyer as they approached the rubble. "There was never real doubt that we would succeed."

Max crawled through the tunnel, still babying the mapping device. The hold of the Kettle opened like the maw of a friendly fish, Wheel holding the ship steady. Lahra followed shortly after, sword-first since she wouldn't fit with the blade locked onto the back of her suit. He offered her a hand as she emerged from the tunnel. She took it and squeezed, letting him "help" even though she was fine on her own. It was one of the many ways they showed one another that they were a team, always looking out for one another. Like when she'd sit up with him as he was studying even though his research could literally put her to sleep.

Max took one last look at the tomb as the ship pulled away, the ramp rising to close. Another brush with death, another run-and-gun engagement, and, if they were lucky, another step closer to home.

But whose home? And what did that mean for him and Lahra?