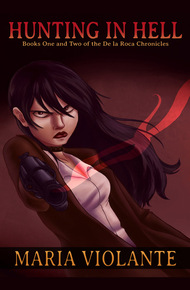 After a major car accident caused her to seriously re-assess her priorities, Maria Violante quit her job as a desk-jockey and started to pursue one of her longest running dreams—writing. That decision was overly optimistic, and she wound up getting another job—but not before completing the rough draft of her first novel, Honda or Die, the mediocrity of which dooms it to remain on her hard drive until she can figure out how to bury it. Maria writes in several different genres of speculative fiction. Some of her releases include the demon-busting De la Roca Chronicles, the sci-fi clone romance New Humanity series, and the Shifting West books (romantic urban fantasy with shape-shifters in 1870’s Nevada.) Whew!

Her current projects include Seven Sacrifices—the third installment in the DLR chronicles, due for release soon—and an almost completed, yet-untitled urban fantasy that stars a female truck-driver who accidentally becomes part of a creature-hunting fraternity of Brothers.

An inveterate traveler, all projects were at least partially written from the passenger seat of a 2011 International Prostar semi with a Chihuahua in the lap.

Hunting in Hell by Maria Violante

It’s a side of the southwest never glimpsed by mortal man--a heartless, barren outback riddled with ruthless demons. In its ignorance, humanity is powerless to stop these escapees from Hell and the havoc they create with their dark magic. Good thing De la Roca isn’t human. A gunslinger with no memories of her previous life, she has fought for the last three hundred years on the forefront of a supernatural war, relying only on her wits, her reflexes, and her own demonic powers--all to pay for her own release from Hell. The Angels wouldn’t send her in alone and unarmed, though; Alsvior, her gifted--if contrary--steed, and Bluot, a legendary revolver with an unquenchable blood-lust, have been with her every step of the way--alone with a series of terrible nightmares that might hold the keys to her past. Then, an Angel appears with a bargain that seems to good to be true--five final targets, and she is free from her penance. Quickly, she discovers that her old methods are not up to the task, and she’s forced to team up with a mysterious gatekeeper and another mercenary--both of which need her for their own plans. With time running out, she has to figure out who to trust and who to kill, and fast, before she’s demon-food.

A smile played at the corners of De la Roca’s lips. “Alright, Rico. This had better not be a waste of time.”

Blessed with a demon’s sharp senses, she saw the way his heartbeat quickened, the tiny bump at the side of his throat flashing like a beacon to advertise his fear—and his arousal. His gaze swept over the long fall of her dark hair, his nostrils flaring at her scent.

She ran her tongue over her top teeth, enjoying the contrast between sharp and soft. “A little birdie told me you had my gun. It’d be a shame if they were wrong.”

His gaze flicked toward her mouth and his throat jumped as he swallowed. She knew he was weighing the two options, trying to figure out if the stories he had heard in seedy bars and dark alleys were true. After all, if I were in his position, that’s what I’d be trying to do.

And yes, they are true, every last kill. Don’t make me kill you.

“Well, don’t hold back on me then.” She held out her hand, palm up. He gave it the stare reserved for holy relics. It wasn’t until she cleared her throat and shot him a glare that he walked to the front of the store, locked the door, and pulled the shades.

She raised an eyebrow. “Is that necessary? Does it make you feel safe?”

He squinted. “I’m a private person.”

Nice job avoiding the question. “It isn’t like your enemies are going to be stopped by a door, and it doesn’t matter if a human sees.” An infantile need to tease him leapt through her, and she almost giggled. “Just how many times have you relocated?”

“I don’t know.” He cast his gaze to the floor, his bottom lip stuck out like a sullen child’s.

Oh, I think you do, but I won’t push that point. “And they never notice, do they? Isn’t that how that akra works?”

When he didn’t answer or look up, she gave him a stare she knew he would feel. Finally, he met her gaze. “I don’t know. The first town just forgets, and the second one just remembers, as if I had always been there. I just . . . fade into their consciousness, like when someone turns the volume up real slow.”

His face grew tight, the eyes flaring with pride, and she felt her skin flush with anger. Looks like you need a lesson. She let her pupils expand until she knew the irises were dark pools. “Join me. Find out what it’s like to be me.”

And then she let the darkness that always ran within her leap out and grab him.

They fell together, hurtling from light to shadow, away from this room and into the stone void where she once kept her soul.

He slammed into the floor with the slap of meat on a butcher’s block and whimpered. “I’m sorry—”

“Shut up.” She sighed, and a circle of light opened above them, a portal that no living creature had ever passed through. Streams of white light wove through the void, and Rico’s whimpering increased. ,em>Yes, you’ve heard about this. You know what is coming.

He scurried to wall nearest to him and scrabbled frantically at the stone. She tossed her head back and laughed. “Here they come!”

It started with a single flicker, a solitary anti-shadow that bobbed out from the wall over his head. He hunched himself into a ball and sobbed. “Stop this, please. I’ll do anything.”

“Sorry, Rico.” With the sudden build of a cresting wave, the ghosts streamed out from the walls around them, their ethereal forms traversing through the rigid darkness and rising with a series of cries and moans. They came out in droves, but the alabaster forms gave no sign of recognizing the presence of the pair.

Always nice to see the variety. While some of the vanquished had humanoid or animal faces and forms, others were monstrous, distortions of biological life that should have never been allowed to exist. And I killed all of you, and I took your kevra stones.

She waited until the majority of the flock had passed, and still Rico huddled in a ball, his eyes squeezed tight. She laid her hand on his side.

Face tight, he looked. “You lied.” The last ghost hovered gently by the exit, a female with an almost human form.

It rose a little more, and De la Roca felt the muscles underneath her hand slacken. Oh no, silly, it’s not over.

Inches before passing into the light, the ghost stopped and turned, as if suddenly becoming aware of their existence. The terrible mask of need came over its face, hunger lighting up the dead eyes. It pulled closer, its arms reaching out for Rico’s cowering form. He pushed himself into the stone wall, shrinking until he was as small as a child. No, there’s nowhere for you to go.

The ghost floated over his head and to the front of his face, bobbing in and out of the stone.

He shook his head, and the lines of tears that spilled down his cheeks glistened in the reflection of the portal’s light.

“Open your eyes, or I will kill you in the most agonizing way I can. You were so proud, weren’t you? Well, open your eyes, and see everything a man should never see.”

In a movement so slow it almost creaked, his eyelids came apart.

The ghost paused, waiting, and De la Roca nodded, turning away slightly in anticipation of what would happen next.

Rico screamed, and De la Roca heard the way his fingers scrabbled at the wall, the way his shoes scuffed the floor as his legs jerked like flapping wings. She knew he saw a room of reflections, image after image of death and destruction, of murder, pain and horror.

When she thought he was close to losing his sanity, she blinked, and the well and its ghosts were gone. Instead, they stood face to face, the familiar smells of guns and leather wafting from different sections of the shop.

He took a shuddering breath and leaned on the counter that rested between them.

He reached under the counter and pulled out a case. In a single, trembling motion, he set it down and opened it, before pulling out what she came for. Her pulse quickening, her gaze trailed over the handle. The ivory was yellowed and cracked, the edges peeling away from the base. How sad, seeing it like this.

“Barrel’s frozen.” His mutter was half-plea and half-apology. “Don’t know if you’ve got any bullets.”

“You shouldn’t have touched it.” He flinched, and she glanced around the room. “I’ll take it, and that one in the corner.” With a quick wave, she indicated the shotgun on the side wall, before pointing at a pistol in the display case under her nose. “This one, too.”

“Right.” He shambled over and pulled it down, before returning and setting it on the counter. In practiced movements, he wrapped up the shotgun and the pistol with a polishing cloth.

He knows better than to offer me a case. So, Rico, you do learn. Before she left, every gun would go to its proper place on her body and stay there until its purpose was done.

When he started to wrap up the revolver, she reached out and laid a hand on his arm. He froze as she slid it down his sleeve. Gently but firmly, as if removing an errant garment from the hand of a baby, she unpeeled his fingers. With a deep breath and a quavering heart, she took her gun.

From the second she grasped the grip, the hum started, a low, teeth-shaking vibration. Two sparks flared up, brighter than a welder's arc. They doubled again, and again, multiplying at a rapid pace. When there were enough of them, they pooled together, blazing and expanding until the gun was covered with a coat of flames. Rico’s mouth fell in awe as the rust melted off, leaving behind silver metal that was both smooth and shiny.

When the fire finally died out, she opened the shade, and sunlight streamed in, blinding in its sudden brightness. She held the revolver up to the window, inspecting it in the light.

“Hello, my beauty.” The ivory on the handles had somehow re-grown, becoming flush with the edges. It gleamed with a polished luster.

Alsvior’s hooves tore into the earth as they sped away, and De la Roca breathed a sigh of relief. Bluot, the death-bringer, had chosen to return to her.

You were lucky, and in more ways than one.

Her last assignment, the hunt for Tengu, had been a wicked one, a close call that she almost didn’t walk away from. Been a lot of those lately, haven’t there? But never one where I’ve lost the gun.

She took her failure as a warning, a sign that things had to be different now. Her targets were always changing, becoming more powerful and more cunning by the day. If she kept pushing herself past the point of recklessness, she wouldn’t be able to keep up.

No, I can’t jump in anymore, not without researching the target or planning my escape routes. Not if I want to live.