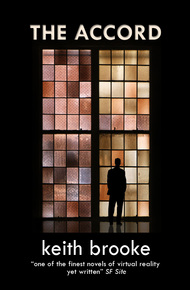 The Accord by Keith Brooke

The Accord, a virtual utopia where the soul lives on after death and your perceptions are bound only by your imagination. This is the setting for a tale of love, murder and revenge that crosses the boundaries between the real world and this virtual reality. When Noah and Priscilla escape into the Accord to flee Priscilla's murderous husband, he plots to destroy the whole Accord and them with it. How can they hope to escape their stalker when he can become anything or anyone he desires and where does the pursuit of revenge stop for immortals in an eternal world?

4. Keith Brooke might be a new name to you. He shouldn’t be though. I first read Keith twenty years ago in the British SF mag Interzone. I remember being absolutely gobsmacked at the evocative nature of his prose, and when I edited Redbrick Eden to raise money for homelessness in the UK I knew I wanted Keith in there, even if everyone else was a horror writer. Brighton Town is still one of my favourite stories in that anthology. There was no way I could do a cyberpunk bundle without Keith. Simple as that. – Steven Savile

Bartie Davits was a sweat, a ride, a kid who hired out his body to make a living. A student working his way through business school, paying his own way because his parents were in no position to help, one of them a low-paid supermarket assistant, the other long since dead and gone. Sweating was easier than shop work, and generally safer than dealing, although Bartie did a bit of that too – that was just a natural extension of his business training, he always argued.

He liked the SweatShop parlour in Haymarket. Real class. You could taste it in the air.

He opened his eyes, remembering where he was, getting used to his own senses again after spending what felt like a couple of days warehoused off in netspace, playing TrueSim games while some rich wanker fooled with his body.

A face loomed over him, cheekbones like geometry, perfect skin, eyes like the flawless glass eyes of a porcelain doll. Bartie could smell her and she was like apples. He smiled.

"What's the damage?" he asked.

She smiled back at him, everything symmetrical. Someone had paid a fortune for those looks, he guessed.

"Narcotic residue," she told him. "Alcohol residue. Black eye – looks like you had a run-in with someone. That's all, though, Mr Davits."

No serious damage this time, then. Right now there would be drugs cleansing his blood and liver, stripping out the narcs and booze, replenishing his reserves. That was one of the perks of sweating; some people argued that the clean out could add years to your life. Rich wankers would pay a fortune for some of this shit and here was Bartie Davits, getting it all for free. Fuck no: getting paid for it.

"Like we agreed," he said, sitting slowly. "Cash in hand, right? I'll deal with the taxman later."

She smiled her professional smile again. "The fee is already in your registered account, Mr Davits, minus tax, health insurance, and obligatory pension, just as always. No special arrangements."

He stood, stretched. Felt unfamiliar aches and stiffnesses. Raised a hand to his left eye, suddenly aware of its dull ache.

He looked down at his clothes: a slick pair of jeans, a crumpled silk T-shirt, pointed snakeskin boots, none of it his. There was a bag on the side containing his own newly laundered clothes. The new outfit – another perk.

He hoped his body had had a good time while he was warehoused playing games.

Funny to think that his own body had experienced far more than he himself had – and he knew nothing about what it had been through other than a bunch of hints and signs and scars...

Out along a corridor, mirrored walls multiplying him, bright lights making him squint, still getting used to the feel and responses of his own body again. Into the foyer, all tall, angular plants emerging from white-painted steel pots full of black glass pebbles. The street beyond looked dark through the clinic's floor-to-ceiling tinted glass front.

He was just wondering whether it was a Comedy Store night, who might be on. Maybe he'd call a few mates and front them for a night out, make the most of the new wad in his bank account.

He stepped out through glass and white-steel doors that slid open as they sensed his approach. He had time to notice the sudden clash of warm scented air from the interior of the clinic mixing with the smells of the damp London street, had time to emerge into the drizzle, to look left, then start to look right, and then they were on him.

A sudden rush of figures... Two men stepped out from his right and as he opened his mouth to speak, to curse them for jostling him, for not looking where they were going even though it was actually Bartie who had stepped out into the flow, another two took him from the left. His arms gripped tightly, he smelt something cloyingly sweet, realised someone had sprayed something, felt it infiltrating his lungs as he breathed it deep, heard the gabble of street noise suddenly fizz to static, to nothing...

He remembered, then, the men grabbing him, the prickle of some kind of nerve agent in his lungs. He realised they were police, some in uniform, some not. He hadn't had time to take it all in as they descended on him, in the sudden rush of sensation as the foundations of a normal day were abruptly pulled from under him.

He was on a bunk, a brick wall to his immediate left, a narrow strip of floor and then another bare brick wall to the right. There was a door at one end of the cell, past his feet, with a viewing panel set into it. In one corner of the room, where two walls met ceiling, the glinting eye of a security cam peered back at him.

He sat, rubbing at his temples as dizziness descended.

Down on the concrete floor, he pressed his feet against the wall and started on sit-ups, rapid and regular, enjoying the rush of blood and adrenalin that kicked in with the exercise. Bartie liked to look after himself. It kept the brain in tune as well as the body. And his rich clients liked a fit sweat to ride in, so it was a good career move, if sweating could really be considered a career. These little touches generally brought him a better class of client, in any case.

He was past 150 when he heard the door. He carried on until a man said, "Bartie Davits. You're wanted for interview."

"Interview?" he asked, pausing, twisting to see the uniformed man framed by the doorway. "Like for a job?"

The policeman just looked at him, waited for him to stand, stepped back to let him out into the corridor.

A short time later, Bartie was sitting in another room, elbows on a desk. There was a plain-clothes officer across the table from him, a uniformed man on the door.

"Bartholomew Brooklyn Davits," said the officer, "we have reason to suspect your involvement in the murder of Elector Jack Burnham in Jakarta on the twenty-third of this month. This interview is being recorded and your responses processed for veracity by smart systems from two independent vendors. Anything you do or say may be used as evidence in a court of law, and may also be used for commercial purposes. Do you understand?"

Bartie stared at the man. "I understand your words," he said slowly, "but fuck no, I don't understand."

The officer had a feed going into his ear. He received some kind of input, nodded, and his eyes met Bartie's again.

Then Bartie added, "Burnham? Elector Burnham? The virtual worlds guy? Dead?" At a brief nod, he continued, "I... I've been out of it a couple of days. I hadn't heard. I sweat rides, you know? I was sweating, warehoused in a databank somewhere while some rich fuck rode my bones, you know?"

Another pause, while the officer listened to his feed, then: "Elector Burnham was killed by a kid called Joey Bannerman."

"Bannerman was gap-yearing round the world, ran out of cash, took to sweating to get by. He was ridden by the killer."

Bartie got it, then, he thought. "Not me, man... I didn't do nothing. I was warehoused, playing TrueSim strategy games in perfect isolation. Check out the records: I was pumped into a databank and kept clean and cut off from the world. They have to do it like that. Data integrity and all that: have to put back what they take out!" He laughed awkwardly.

"We don't think it was you, as such," says the officer.

Bartie relaxed, hadn't realised how much tension he'd been holding in. Then he registered the "as such" and he saw from the officer's expression that there was more, a layer yet to unpick. "And?"

"We've pattern-matched traits identified from the datafeed that injected the killer into Bannerman's skull. The killer was an amalgam, a construct. Whoever was behind the assassination took a few traits from here, a few from there, and built the killer suited for the job."

Bartie waited. There was more.

"It's a known technique. Developed by the Yakuza but it's been seen in a number of cases now. The way they do it is they have to have a solid foundation, a template, someone who could easily be a killer in the right circumstances, with the right traits added, remixed, recompiled. We've identified the template, Davits. We've tracked down that individual. It's you."

Bartie shook his head. "But it wasn't me!" he finally said. "I was warehoused, isolated... It wasn't me."

"Your profile was used," said the officer. "Edited, built upon. We're talking legal grey areas here. Our advice is that this could be the test case to beat all test cases. Could take years."

The officer was enjoying this, Bartie suddenly realised. "How do you mean?"

"It's all about legal culpability," the officer explained. "When due process proves that you were the template used in this crime, and when it is demonstrated that the killer was substantially you, then you will share legal culpability for the killing."

"No, that's true. But there is evidence to show that a statistically significant instance of you was..."