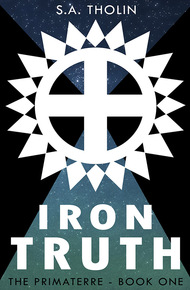 Sofie Anya Tholin is an award-winning Swedish author. Following multiple honorary mentions for her short stories, and a Fantastiknovelltävlingen victory in 2002, she moved to the United Kingdom to study English at Cambridge. She now lives and writes in Skåne, Sweden.

When miners on a remote colony dig too deep, the golden age of space exploration comes to a bloody end. A corruption springs from Xanthe's alien soil, possessing every mind it touches. In order to preserve Earth, its surface is quarantined, and all further deep space colonisation is outlawed.

Aboard one of the last colony ships, junior botanist Joy Somerset slumbers in cryostasis, unaware of war and corruption. Expecting the clear skies of a garden colony, she instead wakes stranded on Cato - a planet whose menacing sands seem to share a hunger with the crazed locals - and Joy faces mortal peril at every turn.

Commander Cassimer, troubled by a past of epic proportions, is a Primaterre veteran dedicated to fighting the corruption. Now he leads Scathach Banneret Company's elite strike team on a mission to recover a clandestine starship lost on Cato. On this storm-lashed world, surrounded by shadow and ruin, Joy and Cassimer must trust each other long enough to uncover Cato's dark secret and work together to survive deranged cultists, terrorist rebels, and the IRON TRUTH.

In the blink of an eye, familiar constellations were replaced by alien stars. The shuttle had completed its fold, no longer inside protected space, and Cassimer could feel it. It was an emptiness of the soul, bringing an instant longing to return home to the embrace of the Primaterre Protectorate.

He shut his visor against the dark and made himself the armoured fortress a banneret commander was meant to be. To keep the demons at bay, he had to remain calm and pure.

The flight crew didn't seem to feel the difference as he did. Perhaps they had seen enough space to be immune to the corruption that crept in shadow and nothingness.

"I've double-checked it, Commander; the signal's definitely there. The ship deviated from its course and landed on XR-755."

The navigator indicated one of four planets displayed onscreen. Rossetti was not a large system, and only two of its worlds had seen attempts at colonisation. That was good news for Cassimer and his banneret team, but one of those colonies was on XR-755. That was bad news, though whether it was bad news for them, or for the colonists, remained to be seen.

"The trace ends before the ship even hit orbit. Scanners can't narrow it down any further. There's a lot of atmospheric disturbance – I shared the details to the team's primers, but long story short – the weather on XR-755 is shit. I hope everyone remembered to pack their umbrellas."

"Save the preaching for your banny boys, Cassimer. You don't lecture my crew, I don't lecture yours, all right?" Captain Albany turned from her flight monitors to arch a finely-plucked eyebrow at him. Her uniform was as impeccable as her record, but she had an habit of wearing her hair in a regulation-skirting manner. Currently, her blonde locks were gathered into a sloppy braid. One strand of hair tumbled down the side of her face, where it had spent the past few hours irritating Cassimer.

She rolled her eyes. "Can't wait to get you lot off my ship. Earth have mercy; I need to make it clear to Bastion that Captain Albany does not run a taxi service for the banneretcy."

It was beyond Cassimer how Captain Albany ran anything, let alone her own ship. The impression her spotless record had given him did not much correspond to reality. He suspected it might have been polished by one superior or another, promoting her to be someone else's problem.

"That said." She turned to her navigator. "You watch your mouth, yeah?"

"ETA to XR-755?" Cassimer accepted the navigator's share request. The details on the planet were downloaded to his primer, and he filed them in the appropriate mission-related folder. The primer, a synthetic modification of his DNA, provided more digital storage than he could ever hope to fill, but that was no reason to be disorganised. Order was everything.

Once properly labelled, he called the information up to the heads-up-display on his visor. While impure, the navigator's choice of language hadn't been inaccurate. The planet was a dustbowl, ravaged by electrical storms. The fact that colonists still remained on XR-755 – or Cato, as it was known locally – was incomprehensible. It was hard to imagine a more bleak existence.

"We're one point five hours out, Commander," said the navigator.

"Sure, if your pilot was some chump fresh out of the academy." A smile tugged at Albany's lips, and she finally brushed her hair behind her ear.

The shuttle changed course, and the alien stars gave way to a view of the Cascade that had just processed their fold from Primaterre space. The massive structure looked desolate. Plates had fallen from its metal hull like scales, airlocks gaping open where scavengers had broken in.

The early days must have been glorious. Tens of thousands of settlers, working together to disassemble their architect ship, turning its bones into the Cascade that would reconnect them to civilisation. Cassimer had seen old footage of connection celebrations. How much happier people had seemed back then. How much more light in the eyes of those who didn't yet fear the dark. Still, those were the same people who'd eventually brought humanity to the brink of destruction.

"One borrowed burst of energy, and I can ride the brane waves all the way down to XR-755. We'll be there in thirty, max." Albany's fingers darted across her comms panel as she attempted to establish contact with the Cascade. Inside the abandoned structure, lights flickered on, and silver flame licked arcing pylons.

"We're not in Protectorate space, Captain," Cassimer said. "There's been no maintenance of this Cascade for the past century. I'd advise using it as little as possible."

"Pirates zip in and out of this system all the time. If the Cascade's good enough for them, it'll be good enough for us. Besides, the longer we stay out here, the greater the chances we're detected. A Primaterre shuttle arriving unannounced in unclaimed space? We'd soon find ourselves in the middle of a firefight – political and actual. Space is big, Cassimer, but full of watchful eyes."

True enough, and he nodded his permission.

"Great," Albany said, one eyebrow still cocked. "And do you mind not hovering over my shoulder? It's like sitting in the shadow of death."