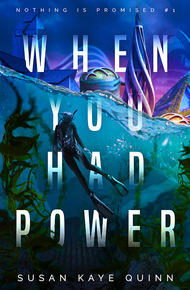 When You Had Power by Susan Kaye Quinn

For better, for worse. In sickness and in health.

It's a legal vow of care for families in 2050, a world beset by waves of climate-driven plagues.

Power engineer Lucía Ramirez long ago lost her family to one—she'd give anything to take that vow. The Power Islands give humanity a fighting chance, but tending kelp farms and solar lilies is a lonely job. The housing AI found her a family match, saying she should fit right in with the Senegalese retraining expert who's a force of nature, the ex-Pandemic Corps cook with his own cozy channel, and even the writer who insists everything is stories, all the way down. This family of literal and metaphorical refugees could be the shelter she's seeking from her own personal storm.

She needs this one to work.

Then an unscheduled power outage and a missing turtle-bot crack open a mystery. Something isn't right on Power Island One, but every step she takes to solve it, someone else gets there first—and they're determined to make her unsee what she's seen. Lucía is an engineer, not a detective, but fixing this problem might cost her the one thing she truly needs: a home.

When You Had Power is the first of four tightly-connected novels in a new hopepunk series. It's about our future, how society will shift and flex like a solar lily in the storms of our own making, and how breaks in the social fabric have to be expected, tended to, and healed. Because we're in this together, now more than ever before.

A steaming plume of anti-viral spray doused her.

Lucía held her breath until the gas settled on the concrete step below her boots. The biohaz goggles were definitely the right call. Nothing like blasting off any freeloading virus before saying hello. She hitched her backpack and smiled for the camera, wherever it was. The cottage-sized house was like a fairy tale—a literal white-picket-fence, beautiful bay windows (blinds closed; sorry, no sneak previews), and a tiny garden with responsibly-California-native wildflowers and an inviting wooden bench.

Two ceramic frogs were making out on the seat.

Then there was the half-inch-thick acrylic shield sealing off the porch. Probably could survive a sarin gas attack if their Huntington Beach homeowner's association went Mad Max over the frogs. She focused on the house number and tapped the display hovering in the air just past her goggles. Her chip brought up the overlay. The Strong Family. Yup, this was the right place.

"Hello, Lucía Ramirez. Do I have your name right?" The household bot spoke from a hidden speaker, basically asking for a voice print. No sign of the family inside, but the bot's non-gendered face appeared on the shield, patiently awaiting her answer.

Lucía carefully lifted the goggles from her eyes and perched them on her forehead, in case the bot wanted a facial scan as well. She took care not to lick her lips or rub the itch on her nose. She had no problem with the borderline-non-consensual anti-viral dosing—she was determined to make this whole thing go smoothly—but practically speaking, that shit hurt if it got on your mucous membranes.

"Yes, I'm Lucía Ramirez." She annunciated clearly, maintaining the pretense she was having a conversation not passing a security check. This was part of the interview, to be sure. And if you couldn't even be polite to a house bot… The Southern California Housing Authority's AI gave this family match a 95% rating, which was crazy high. Lucía had filled out the application. She'd received an invite. But this was the final step. The literal crossing over the threshold. You weren't in until you were in. And even then, it would be probationary for weeks, months, or even years. No commitment, no legal papers until everyone was on board. Which only made sense. Anyone could tell a good story with their public-facing data, and her application was as genuine as recorded media allowed, but reality lay in true face-to-face interactions. That's when you discovered if the AI had found a real match. Or if you brushed your teeth too loudly and had to be kicked out. "If this is a bad time, I can come back later." She tried not to sound desperate. Because she wasn't, not strictly. She could always find a place to stay. She just didn't have a home.

"Oh, no, honey, you're right on time." A roundish human face, light brown skin with deep brown eyes, had taken the bot's place. He smiled wide, and it seemed warm, as much as you could tell on the flatness of the house shield.

"What—she needs to show her—" A second man shooed the first off-screen then scowled at her. He was leaner, his expression cooler. "We need to see your passport first. Sorry."

"No, it's fine." She hustled to pull the thin paper booklet out of her backpack pocket. The front page had all the latest vaccine stamps. She pressed it against the transparent shield, lining it up with the front door, uncertain exactly where the camera lay.

"Scan document," the man instructed the bot. Lucía held extra still for the split second of scan. The man was pale-skinned, mid-thirties. He had to be Jex, one half of the core couple of the family. She'd read their profiles, of course, when she applied—Jex and Wicket Strong—two of the six people in the cottage. Seven, if Lucía was adopted in. The rest were peripherals like her, their profiles not accessible, at least not with a locator, for safety. The Strongs were the gatekeepers, deciding who would be let in.

Who fit in. They were the human fit-check.

The Housing Authority's AI was like a digital oracle—no one understood how it pattern-matched all that data and popped out a match, but everyone used the predictions anyway. Except that humans, while absurdly predictable on average, were impossible to model individually. And they weren't stable systems. A family match was more like a weather prediction. Probably sunny… but still a 10% chance of thunderstorms. Because even when you didn't annoy the crap out of each other, even when you thought you were accepted into a family, when an unstable low-pressure front came through, things didn't always work out as planned.

Which was why she was here.