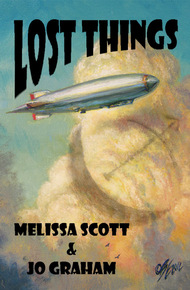 In 1929 archeologists began draining Lake Nemi in search of the mysterious ships that have been glimpsed beneath its waters since the reign of Claudius. What they awakened had been drowned for two thousand years. For a very good reason.

Veteran aviator Lewis Segura has been drifting since the Great War ended, fetched up at last at the small company run by fellow veterans and pilots Alma Gilchrist and Mitchell Sorley, assisted by their old friend Dr. Jerry Ballard, an archeologist who lost his career when he lost part of his leg. It's a living, and if it's not quite what any of them had dreamed of, it's better than much that they've already survived. But Lewis has always dreamed true, and what he sees in his dreams will take them on a dangerous chase from Hollywood to New York to an airship over the Atlantic, and finally to the Groves of Diana Herself….

The world is full of lost treasures. Some of them are better off not found.

5. Melissa Scott & Jo Graham came to my attention through Stargate. They were working on Atlantis: Homecoming at the same time as I was working on SG1’s Power Behind the Throne. I had the pleasure of reading their stuff and realizing how much better than me they were, which is great for you as there’s two in the bundle from Melissa, and the one collab with them working together. – Steven Savile

Alma let out a deep breath and sat down in the chair as Jerry got up, trying to compose herself. He put one hand on her shoulder briefly, and she smiled up at him. "Just like old times," she said.

Jerry nodded, reaching in his pocket and pulling out a steel handled penknife. He flicked it open one handed, the sharp blade catching the light of the candle flame as Henry pulled the curtains at the window. "Which way is…."

"That way," Alma said, nodding toward the door.

Jerry smiled. Jerry's lack of a sense of direction was a long standing joke. He turned around, his back to her, facing east, and she heard him take a deep, centering breath. Henry sunk back into his desk chair, and Alma closed her eyes. This part was Jerry's, and she had best use the time to relax.

Another breath, and Jerry began, the Hebrew syllables falling resonantly from his lips. "Ateh malkuth ve-gevurah ve-gedulah le-olahm." She did not need to see the movement of the blade tracing patterns of fire across his body. She could feel it like a familiar whisper, like the rustle of silk. "Amen." She could feel the knife lift again, marking the pentagram in the air, feel it like the glow of the candle before her.

The sound of his footsteps was muffled by the thick carpet, but she felt him pass her, journeying clockwise around her to face the bookcase to the south. Again the movement of the knife, blade channeling will.

Another set of steps, now to the windows that let over the swimming pool, his back to Henry as he inscribed the symbol to the west. It felt like a breath of rain, as though a cool wet wind had stirred the curtains, and Alma bent her head. The first time she'd seen this she'd been frightened. Gil had reached over and squeezed her hand. Now it was comforting.

Again, and Jerry was facing north now, another inscription before he moved back to where he'd begun, sealing the circle he had traced around. "Before me, Raphael," Jerry said, his back almost against hers. "Behind me, Gabriel. On my right hand Michael, and on my left Uriel. About me shines the pentagram, and within me the six rayed star."

Alma opened her eyes. Though nothing had physically changed, the room seemed lighter, cooler. Jerry bent his head for a moment like a man in prayer, then turned about, closing the penknife. "I think we're ready."

Wordlessly, Alma flipped open the Motorist's Atlas, turning to the road map of southern California, while Jerry unwrapped the tablet and laid it on the desk beside her. It gleamed dully in the candlelight. She took a deep breath and reached up to unfasten the chain around her neck, pulling the necklace off and laying it in front of her. She'd gotten used to wearing her wedding ring on a chain around her neck when she flew, because she hated having anything on her hands, and now it seemed like a compromise. She wore it next to her heart, not on her finger as a reproach to Lewis. Nor could she bear to leave it off entirely. There might be a time when she did. Almost surely someday there would be a time when she did, but not now.

Henry's eyebrows rose, but he said nothing.

Alma refastened the chain, resting her right elbow on the desk and looping the chain around her ring finger, raising her arm at ninety degrees to the surface, so that the wedding band hung free beneath her palm an inch or two above the atlas. It turned slightly as it swung, the script inside the band catching the light. "Ok," Alma said, looking up at Jerry.

He nodded and moved the tablet closer, until the fingers of her left hand rested lightly on the edge of it. "She's going to find the connection," Jerry said quietly to Henry. "A creature like that leaves a big footprint, and we have a material connection with the tablet."

Metal. Alma closed her eyes again, her fingertips just touching the edge of the tablet. Incised metal. Lewis had tried to see, had tried to open a window into the past using his untapped clairvoyant potential. Alma had none, but she knew how to use what she had. Metal from the breast of the earth, lead forged long ago. Metal in her other hand, the gold ring swinging in the loop of its chain, turning and catching the light of the candle flame. Red fire. Forger's fire. Tablet and ring were both born of flame, both born from the breast of the earth.

Show me, she whispered silently. Not Jerry's focused will, not the power of words, but more primal than that. Like calls to like. Flame calls to flame, metal to metal, and the tablet to the creature it bound so long.

And the last piece. Earth rendered into symbol, not in the banishing pentagrams of Jerry's ritual phrases, but in the prosaic and easily understood symbols of the road map. Here are the Sierra Nevadas, here Banning Pass. Here is the highway that runs across the desert to Las Vegas, here, just as she had seen it from the air days ago, a ribbon on the map making plain the memory in her mind, the snake of black asphalt through red land. The map was a skillful symbolic representation, everything to scale, and like the best correspondences there was nothing occult or obscure about it. Anyone could understand it. And hence it had more power, not the power of secrecy but of omnipresent belief.

Show me. She felt the pendulum begin to move, the ring swinging in wide circles. It tugged. It pulled. This way. She heard Henry stir, and perhaps he would have said something, but Jerry forestalled him.

"Give her time," Jerry said.

There was a rustle, and for a moment the pendulum hesitated. Paper moved. Jerry was turning the page in the Atlas. She must have tracked off one border or another.

Show me. Not nearly so far north as Las Vegas. The desert unspooled in her mind, rail lines running straight as a ruler across the land, like looking down from 5,000 feet, cruising along. Williams Junction. Flagstaff. Gallup.

Another stirring. She was running off the map again, Jerry turning the pages, flying east as though she were winged herself, flying into afternoon. The shape of the plane raced ahead of her on the ground, her beloved Jenny. Albuquerque was an oasis of green, round circles of irrigation bright against the desert, growing oranges and lemons in the May heat.

The tracks turned northward and now so did she, her shadow out over her right wing. Northward toward Colorado. Just south of Trinidad she saw the train, a streamlined silver streak against the earth, the Santa Fe's Chief laboring up the grade at fifty miles an hour. The plane paced it, circling.

Somewhere far away the ring was circling too, turning in a tight knot over the page of the atlas.

"There's nothing there," Henry said. "Why the hell would Davenport go there?"

"He's on his way to Chicago," Alma said, her voice sounding thready, as though the wind had taken it from her throat. "He's on the Chief."

Alma opened her eyes, letting the ring down where it stood. It lay on the paper, the circle of gold just touching Trinidad, Colorado.

"He must have left last night," Henry said.

Jerry nodded. "Hire some thugs to kill us, hop on the Chief, have a nice dinner while the deed is done with miles between you and the ones you want out of the way."

"Can you catch him?" Henry asked.

"With an airplane?" Jerry looked over the top of his glasses.

"No, with a bicycle," Henry snapped. "Of course I mean with your Terrier."

"My Terrier," Alma said. She was owner and pilot both, while the amount Jerry didn't know about aviation would fill volumes.

"I have lots of planes," Henry replied. "But I also have mail routes and passenger routes, and I can't cancel scheduled flights to send my pilots out chasing the Chief all the way to Chicago."

"Because that would cost a lot of money," Alma said sharply. "That's a hell of a lot of fuel, Henry."

Henry got up and went to the southward wall, lifting a rather ugly painting to reveal a wall safe beneath. Alma waited while he turned the knobs, then opened the door and drew out an envelope. He counted, frowning, and then handed the contents to her. "Think that will do it?"

"That will take us to Chicago," Alma conceded. She met his eyes firmly. "Are you chartering us to catch your man for you?"

Henry put his hands in his pants pockets, his coat bulging out over them. "Gil wouldn't have charged me for expenses."

"Gil isn't here," Alma said. "And you look like a millionaire. While I am not."

Henry sighed. "Ok. You win. Catch Davenport for me and I'll cover all your expenses."

"You'll cover our expenses whether or not we catch him," Alma said briskly. "We use the fuel either way."

"You could always use your own plane," Alma said sweetly.