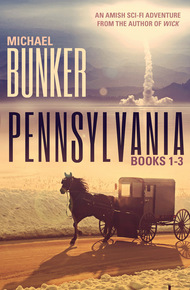 "Michael Bunker has developed his own fascinating style that blends old into new to create something unique in the sci-fi world. Amazing work, a writer everyone should be reading." ~ Matthew Mather

When asked by the Amazon Kindle Blog who was the most under-rated author in Sci-Fi today, New York Times Bestselling Author Hugh Howey replied, "Michael Bunker." Hugh called Pennsylvania "brilliant" and was instrumental in bringing the story to a wide audience.

Michael Bunker is a bestselling author, off-gridder, and "plain" person (think Amish.) He lives with his family in a "plain" community in Central Texas, where he reads and writes books...and occasionally tilts at windmills. He is the author of several popular and acclaimed works of dystopian sci-fi, including his groundbreaking, bestselling Amish/Sci-Fi hit Pennsylvania, the dystopian and post-apocalyptic WICK Omnibus, The Silo Archipelago (written in the World of Hugh Howey's WOOL series,) and the Dunes over Danvar series, as well as many nonfiction works, including the bestseller Surviving Off Off-Grid. In May of 2014 Michael's Pennsylvania Omnibus was voted #20 in IndieAuthorLand's "The 50 Best Indie Books of 2013/2014," and on July 7th the book hit the top 25 (#19) on Amazon.com's overall Bestseller List.

Young Amishman Jedidiah Troyer is now a traveler. He's signed up for an emigration program that is colonizing the planet of New Pennsylvania. He just wants to start a farm and homestead on affordable land in a new Amish community. Space pioneering isn't as easy as it sounds when you're "plain." Jedidiah and his new friend Dawn arrive on New Pennsylvania in the middle of a rebel uprising, and TRACE, the resistance group that is rising up against TRANSPORT, has taken on the mission of getting Jed from the City to the Amish Zone. Being a stranger in the old world doesn't even compare to being a stranger in a new world... a world that is at war and where nothing is what it seems.

7. Michael Bunker describes himself as an ‘accidental Amish Sci-Fi writer’. Pennsylvania went straight in to the top of the Amazon charts for a reason when it came out earlier this year. It’s like nothing you’ve ever read. How could it be? – Steven Savile

Most Plain People are used to feeling guilty when they've done nothing wrong. It's part of the physiology and culture of being different. Usually this feeling only creeps up on them when they're out among the English. There was something in the way the English looked at them that conveyed a sense of accusation. Even when tourists were smiling and pointing and saying "How cute!" and asking for pictures, or snapping them anyway while pretending not to, there was always a subtle covetousness in the way the English looked at the Plain People. Maybe it was something around the eyes, but the gist of it was that somehow life had been unfair, or maybe the Plain People had done some great wrong to have to live an unadorned life of simplicity. The whole thing was an insoluble enigma. Even though the English man or woman may not want to be plain—wouldn't change places even if they could—there was still the communication of some want, or need… or blame that made the Plain People cringe inside. An elder had once called it "a criminal charge that comes through without words."

Seated in the airbus, Jed was attuned to this feeling of guilt. The situation with Dawn and the extra unis was troubling enough, but now he was on an English airbus by himself for the first time, and the looks and stares from many of the English brought back that oppressive feeling of guilt that Jed could not explain, even to himself. The passengers who were on Quadrille or lost on the Internet in their minds didn't pay him much heed. Others, not on the drug and not busy online, stared openly or secretly, usually one or the other, and always there was the wordless accusation… or maybe it was just a question… why?

One man with slicked-back hair—a young man Jed did not know and had never met—openly showed his disdain for Jed. Slicked-back had a sneer on his face, and whenever he caught Jed's eye (which Jed studiously tried to avoid) he'd emphasize the sneer and demonstrably look Jed up and down with disgust. There was hatred in Slicked-back's eyes, and this was not the first time that Jed had seen this attitude among the English. It made matters worse that seats on an airbus were arranged like those on an old subway, with passengers facing one another across an aisle. Slicked-back was across the aisle from him, but one seat over and to his right. Jed decided not to look at him, and he thought back to the incident with Dawn.

Back at the vending machine, when he'd been trying to grasp what was happening with the extra unis, the customs clerk named Dawn had approached him in a way that caused him to experience very real fear. Had he done something wrong?

When she was about five yards away, she'd reached into a pocket of her navy blue vest. Her eyes met his, and then she was extending her hand toward him. In her hand he could see his used electronic unilets card. He'd left it back at the desk. He didn't think he needed it anymore. They were disposable, after all.

"You left this at the desk," Dawn said, and now there was a forced smile on her face.

"I'm sorry… um… listen, I just…" Jed indicated with his head toward the vending machine, but Dawn cut him off before he could say anything about the extra unilets.

"Yes," she said, interrupting him again and nodding her head, "that's all right. Everything is as it should be now. Just take your card and make sure you don't miss your bus."

"Yes, sir." She raised her hands this time. "Everything is as it should be." Her eyes grew wider, as if she were trying to tell him to shut up and just accept things the way they are. "Just take your card and go get on your bus, sir."

"Listen, sir. Everything is fine now. You needn't worry about a thing. I've got to get back to the desk, but… everything is as it should be, so have a great trip." She forced the card into his hand, and when she did, he noticed that she was handing him more than just the card. There was also a small, folded piece of paper, and something else. Something heavy. It felt like a large coin. He didn't look at it.

Not knowing why he did it, but intimidated by the discussion and not sure what else to do, Jed put the card, paper, and coin into his pocket quickly and without argument. He looked up at Dawn and tried to smile, and he noticed that she smiled back. And then she turned and was striding back toward the check-in desk…

In the men's restroom, he examined what Dawn had given him.

There was a note.

Don't say anything about the extra unis to anyone. I can't explain everything right now, but trust me. If you're in trouble in the City, ask at Merrill's Grocery Supply for Pook. Just ask for Pook. Put the gold coin in your shoe, and only pull it out in an emergency. There are no metal detectors anymore since bombs and guns won't work on transport anyway. Unless you get searched, they won't find it. Flush this note when you're done memorizing it. Dawn.

Now he was on the airbus to West Texas, and he could feel the heaviness of the gold coin in his shoe, and somehow the extra unis in his wristband seemed to have an extra weight all their own as well. I feel guilty, Jed thought, and I don't know what I've done wrong. Maybe I should tell someone about the unis and the gold? No. Getting caught with extra unis that don't belong to you would mean automatic deportation. If he did something stupid, he'd never make it to New Pennsylvania. How was he to know what was stupid in this world? For all he knew, everything he did was stupid. He began to imagine the Transport Police storming into the airbus to haul him off and send him to exile in Oklahoma.

Despite Jed's best attempts to put them out of his mind, crazy ideas started to flood over him. Maybe I can spend them all at the SGT station when I get there… maybe I can give all the extra unis away… maybe a Quadrille dealer will sell me some drugs and then I can flush them all down the toilet like I did with Dawn's note… None of his ideas were workable, and most of them would get him deported. It wasn't a far trip from West Texas to Oklahoma. Not far at all.