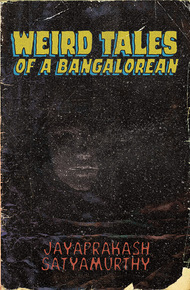 Jayaprakash Satyamurthy is a writer and musician. He lives in Bangalore, south India, with his wife and a horde of rescued cats and dogs. His other publications include the chapbook A VOLUME OF SLEEP, the novella STRENGTH OF WATER, and the poetry collection, BROKEN CUP. His band, Djinn And Miskatonic can be heard on Bandcamp.

Weird Tales of a Bangalorean by Jayaprakash Satyamurthy

In a land where past and future spar for space, the present is never certain. Follow misfits, sellouts and everyday drones through palimpsest streets into places where reality peels away and gods, ghosts, ancestors and/or fungi await.

A beautiful journey through Bangalore that feels ultracontemporary even while holding true to the roots of weird fiction. There are places in Bangalore that are not Bangalore as one character puts it, but if they're not, what are they? Anyone who loves classic weird fiction, but ever wished that it addressed the lives we live now, needs to read this one first. – Nick Mamatas

It starts in a bar. It could start anywhere, but this is my story, and I'll start it in a bar. It was a place I didn't know very well. My regular drinking place had closed down and I was scouting for a replacement.

It was one of the older pubs in town and it was just around the corner from my flat. I'd never been there because I usually went drinking near my office. It was called the Sherlock, and it was built back when people who started pubs in Bangalore were still trying to emulate the traditional British pub. There was some wood paneling in the main room on the ground floor, and a few silhouettes of the sleuth framed behind the bar counter, but there the attempt at carrying the theme ceased. For the most part it was an average Bangalore pub: nondescript furniture, a few plastic chairs replacing the wooden ones that the place had started out with as and when they wore out, some drab prints on the walls (flowers, landscapes, all murky and disheartened), waiters in black waistcoats, that sort of thing. The draught beer was okay, the plate of fries was disappointing.

I tried to get a couple of my friends from the old place to join me there, but it was too far off for them, one reason why I never made it my regular. The second time I plonked down there, I sat upstairs in a small balcony area where they'd put out some chairs and tables. After a while, my order arrived. Close on its heels, a middle-aged man came and sat down at the table next to mine. After a while, he turned to me. 'Not trying the fries, are you?' He sniggered. He had a salt and pepper beard, thinning hair, mostly still-black, slightly hawkish features – sharp nose, keen eyes – wore a denim shirt, white jeans, rubber slippers. 'Hah!' I chortled back. I didn't mind making pub acquaintances, but I wasn't so sure about this fellow – he looked like he might be a bit of a bore, a bit of a crank.

Sure enough, a while later he was inducing a deep sense of stultification in me with a long, rambling account of faceless ghosts some old school pal of his had seen near Naga Theatre back in his long-fled youth. Finally, he moved into the chair across my table and glanced about furtively. Here it comes, I thought to myself. The come-on, the con, the big put-on.