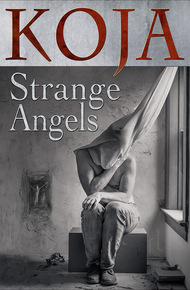 Kathe Koja writes novels, short fiction, and performance pieces, and directs and produces immersive narratives. Her work has won multiple awards, including the Bram Stoker Award, the Locus Award, and the Henry Bergh Award, and has been optioned for film and performance. She's based in Detroit and thinks globally. Her newest project is DARK FACTORY, coming in 2022.

Grant is a photographer, blocked and dead-ended. Robin is a artist of genius, shadowed by illness, whose work shows Grant a way out—and then a way in, to a world of vision he could not have imagined, and neither of them can escape.

There's a little chant that goes through my head sometimes. It goes like this: "Whose the best wri-ter? It's Kath-e Ko-ja!" Koja's early horror novels offered a voice like nobody else was even attempting, and centered the twin weird fiction fascinations of art and madness over by-the-numbers thriller plots. There isn't another writer like Koja, and nobody can drill down into their obsessions, and bring you along for the ride, like she can. Strange Angels will leave you shaken. – Nick Mamatas

The folder against his thigh. Robin had left it there, Robin had insisted he take it home: did she see it? Did she know what was in it? "If he wants to quit therapy," quiet, through his teeth, no yelling, "if he thinks it isn't doing him any good, why can't he just quit? What's the big fucking deal?"

"Therapy," and now she was crying, he saw tears rolling down her face, sweating face and she wiped one-handed at her eyes, her mouth. "He wants to leave here, you know that. You of all people, you're the one who—"

He wants to leave here.

They said I had to wait for three days.

You can just come home with me if you want to.

A pain in his head, as if his brain was just being born, leapt shiny into instant usage and "—what he thinks," bitterly, she was weeping in earnest now. "You have no idea, you don't know what you're doing! You don't know," and then at once turning away, wiping her face hard, both hands as if cleansing herself of blood indelible. Thickly, "I did everything I could," backing out of the car, knee along the seat and the whole motion as strange as being born, a ceremonial exit and Grant put his hand to his head, rubbed hard: Robin's fears, cracked voice and then the calm, he had asked and Grant had answered, gave the right answer without knowing, without being aware—my God, what if he had answered wrong, what if— And a long shiver, tremor involuntary as if in precursor to a seizure, a state, a vision; the screen door closing on Maryann's passage, the porch light clicking off.

In the dark: and thinking, thin line of sweat down his side like a finger, like a tracing hand and a feeling in his head as if he had breathed ether, laughing gas, methane fumes as rare and heavy as the scents of heaven. Should I go get him? Should I just get him now? Things to pack: things to do. What should—and then no; positive. No. He had his own house to clean first, he had work to do. Everything had to be right.

Starting the car, folder safe against his leg and beside it the cigarettes, Roger's cigarettes; not now, Grant thought, I'll give them to him next time. One more next time to make a last time, and then no more and he was smiling, he said it out loud and smiling: "No more," and the folder pressed against him like a jealous pet, no more of this but only everything, everything coming together, not puzzle pieces but pieces of a dream undreamt for so long, so long: and now without any final effort, any executed plan it was here: now.

When he opened the door it was to Johnna, standing right by the door as if she had been put there, some prop to scare burglars and her face, what was it, a harpy's? Medusa's? Expensive-looking new suit, heavy gray and some new haircut, the braid banished in favor of this triangular swing, hair shaped against her face as if she had grown an exotic coat, a new fur skin. How well he saw, his eyes seemed brighter, it seemed he saw everything down to its heart. Sweating a little, and grinning, the folder against his body like a child, like a shield.

"The woman from the group home called me," she said. Her voice was very dry, as if she had not used it recently. "She said Robin is leaving the group home." The muscles of her face almost motionless, when she breathed it was like watching stones scrape. "First therapy, he says he's done with therapy, and now the group home. What's next, Grant? No more medication?"

Of course he'll take his medication; stupid. Stupid: but he could not be angry, right now he felt too good. "Why don't you ask him?"

"He won't talk to me anymore." No yelling, no screaming, he had expected rage but this was something different: "If you were a therapist," that even voice, "I'd report you, I'd have your license pulled. I'd like to have you killed. But what I'd like to know first is what you're getting out of this, Grant? The drawings?" He did not answer. "If it were just the drawings, if I had known I would have just given them to you, I would have—"

No you wouldn't, and it was so true he said it out loud, "No you wouldn't." smiling, he was smiling, he couldn't help it and he saw her mouth curl down; but this was right, all of this was right and Robin knew it, knew all of it; had known for how long? Long enough; longer maybe than he, and now Robin is coming here: like a fire burning under heavy glass, smooth and bright the flames, their motion like the motion of the earth itself, turning to bring you the thing you want most, the only thing you need: Robin is coming here.