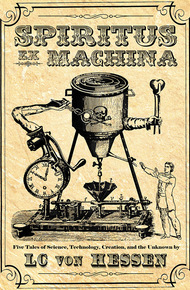 LC von Hessen is a writer of horror, weird fiction, and general unpleasantness, as well as a noise musician, occasional actor, and former Morbid Anatomy Museum docent, among various other hats they've worn over the years. Their work has appeared in such publications as Vastarien, Nightscript 6, Oculus Sinister, and Beyond the Book of Eibon. An ex-Midwesterner, von Hessen shares an apartment in Brooklyn with a talkative orange cat.

Spiritus Ex Machina collects five tales of science, technology, and creation from author LC von Hessen in a mélange of gothic horror, weird fiction, speculative fiction, and dark fantasy. By turns visceral and ambiguous, unsettling and darkly comic, these stories follow artists, performers, doctors, scholars, engineers, and occultists alongside hapless folk who find themselves caught up in the incomprehensible. From 18th-century salon to contemporary suburban home, from fairy tale to thesis paper, from carnival to mortuary to secret society hidden beneath a factory, peer into the Great Unknown through the eyepiece of a sideshow attraction or the eyes of an automaton.

Up from the underground, it's LC von Hessen! Their work is a highlight of all the small-press anthologies in which it has appeared. Combining European decadence and 21st century queer transgression, the stories in this volume actually are for the faint-hearted, or at least anyone who has squeezed a genuine fainting couch in their cramped urban apartment. I am thrilled that von Hessen agreed to create this bespoke volume—and cover—for From Beyond so that we can bring their work to a wider audience. – Nick Mamatas

The young lady dropped her parasol onto the hay bed and giggled nervously as she arranged her skirts over the wooden stool. The machine-keeper—a slim, youthful man barely older than herself, with childlike eyes as blue as seawater—gently fitted the iron band around her skull and instructed her to keep her head still for the moment.

Her husband, a middle-aged gentleman with a broad moustache and an interest in phrenology, coughed with impatience.

"Now what did you say this contraption was meant for?" he asked brusquely.

"Well . . . its purpose is to reveal and display one's greatest desires," replied the machine-keeper in a soft-spoken voice, lowering the bowl over the young lady's head. "Now lean forward a bit," he whispered to her. "Rest your chin on the bar and look into the eyepiece."

The machine-keeper stood back and turned a great crank at the side of the device, flipping a pair of large gilded switches with a show of effort, leaning forward and cautiously spinning dials to meet precise settings under glass displays. The machine began to rumble with grand and repetitive factory sounds of metal parts meeting, churning, pumping, sliding against one another inside the polished steel frame as curls of smoke emitted from a flue set into its roof.

The lady's husband checked his pocketwatch and stared with skepticism at the banner for this exhibition, which depicted a flat, cartoonish version of the machine-keeper gesturing toward his apparatus below a typically hyperbolic description of the act. The machine-keeper himself plucked stalks of hay from his black frock coat, annoyed that the hay could not be restricted to live attractions as he feared it would someday enter the machine and clog its workings. He did not notice the lady's husband examining him until he was addressed by the man.

"Why," said the gentleman, "by any chance, was your father an aristocrat?"

"I refer to your bone structure." The man sniffed as if his observations displeased him. "You have a wide, triangular face with refined cheekbones, and your facial angle approximates eighty degrees. What the devil are you doing here?"

Before the machine-keeper could think of a response, the lady let out a clear, high laugh, like a young girl who has never known hardship. Her hands rose to caress something that was not there and her husband's hirsute eyebrows met in wrinkles above his nose.

"Darling!" the gentleman called, with a stern edge. "Would you do me the honor of revealing what it is that so enchants you?"

She did not answer, at least not in words, and her husband growled into the machine-keeper's ear that he ought to shut down the device now.

The machine-keeper gave the lady a soft tap on the shoulder. "I do apologize for disturbing you, but I am afraid your session must end soon," he whispered. She nodded a disappointed assent and the machine-keeper began to manipulate the controls, with less fanfare this time.

"Put me into that thing," the gentleman ordered once his wife was disengaged from the machine. He was dutifully seated and plugged in, arms crossed with doubt, and within a minute or two he began muttering displeased notions under his breath, which grew louder until he was shouting for the machine-keeper to shut it off and release him.

Detached, he immediately grabbed the machine-keeper by the shoulders and shook him. "Great heavens, man! What sort of an infernal machine do you think you're operating?!" he bellowed. "Such things can turn decent women into hysterics! And to think, at a family attraction!"

"Hogwash! I won't stand such corrupting influences in my own community. I shall report you to the proper authorities at once!" With that said, he grabbed the young lady's arm and stormed off. She threw a blushing glance at the machine-keeper before disappearing behind a flapping tent wall.

When the constable of police arrived the next morning, he found nothing. The carnival had moved on during the night.