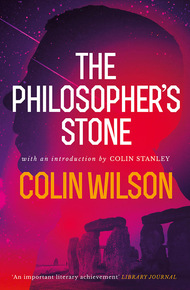 Colin Wilson (1931-2013) was the author of over 150 books, including fiction, philosophy and works on the occult. His novels include The Mind Parasites, The Space Vampires, Ritual in the Dark, Man Without a Shadow, and The Philosopher's Stone. Seven of his best novels have been reprinted by Valancourt Books.

The Philosopher's Stone by Colin Wilson

Dr Howard Lester and his friend Sir Henry Littleway have made a startling discovery: a simple operation on the brain's prefrontal cortex results in vastly expanded consciousness and mental powers, including the remarkable ability to see backwards in time. With their new ability of 'time vision', Lester and Littleway are able to travel back to the days of Shakespeare and even further to the time of the Mayan civilization and the construction of Stonehenge. But their explorations into the distant past and the origins of human existence come with an unexpected and terrifying consequence: something ancient and immensely powerful, long asleep, has been awakened by their activities, and is determined to stop them at all costs....

InThe Strength to Dream(1962), Colin Wilson criticized the horror fiction of H.P. Lovecraft, leading Lovecraft's friend and publisher August Derleth to challenge Wilson to write something better. One result of this challenge wasThe Philosopher's Stone(1969), a fascinating blend of science fiction, horror, and philosophy told within the framework of Lovecraft's mythos. This edition features an introduction by Colin Stanley.

The legendary Colin Wilson has done more to expand, subvert, undermine, and glorify the Lovecraftian idiom than any other writer of the 20th century. And he did most of it on a dare! This novel combines time travel, history, the occult, and the darkness at the edge of time in a delightful way. Wilson, a pulp polymath beyond compare, is one of my favorite writers and it wonderful to see this back in print. – Nick Mamatas

Quite suddenly, all resistance disappeared; the history of the manuscript lay open to us.

And at the same moment, we both became aware of some­thing else – something that temporarily destroyed all interest in the manuscript. The 'alarm' had wakened something up. We both knew this instantly. And then we also realised that so far, neither of us had dealt directly with the Great Old Ones, but only with their robot servants.

It was completely impossible to describe what happened, for this was a direct intuition or feeling – like sitting on a log and discovering it is a crocodile. It might convey something of the terror of that moment if I say that it was just as if a giant black face had suddenly appeared in the sky over Philadelphia, a great face with yellow eyes and a beast's fangs. We had awakened some vast, sleeping force, and its movement was like a psychic explosion, some great spiritual earthquake.

We were both petrified. We felt like someone who walks into a cave, and stumbles upon some sleeping monster, that growls and stirs. Suddenly, I understood the meaning of Lovecraft's line: 'In his house at R'lyeh dead Cthulhu waits dream­ing.' No wonder Lovecraft had nightmares that destroyed his health; through some strange gift of second sight, he under­stood the sheer size and power of the Old Ones.

Neither of us dared to breathe; we wanted to efface our­selves completely. For this 'thing' seemed to shake the earth; it was a power that could have wiped out Philadelphia like a man stamping on an ant hill.

We sat there for more than an hour. I am glad that no one came into the room; it would have disturbed our stillness, and perhaps warned 'It' of our presence. And yet I had no idea that we had been there for an hour; I would have guessed five minutes. Our concentration was so intense that all physical processes seemed to stop.

We had no idea of whether the 'Thing' was aware of us. I am inclined to believe it was not. It stirred in its sleep, looked around for a moment, saw nothing of interest, and gradually drifted back to sleep.

And as we sat there, we both had the same vision: of the horror that would ensue if the 'Thing' woke up. We had visions of mountains ripped apart, of the ocean bed opening into an immense gulf into which the whole Pacific Ocean would vanish, of continents folded and crumpled like sheets of paper. The whole earth could be crushed out of shape, as easily as a power­ful man could crush a ripe orange in his fist.

Gradually, the sense of earthquake died away. It was terrifying while it lasted, for we were both so clearly aware that this was not calculated movement, but only uneasy stirrings. If the 'Thing' woke up any more, there was no telling what might happen; even its stirrings were like the eruption of Krakatoa.

When everything was quiet again, we both became aware that the Voynich manuscript had 'closed' again. It was com­pletely impenetrable. But I had glimpsed enough, in the few seconds before 'It' had stirred, to know most of the answers to the problems that troubled me.

Yes, 'they' had created human beings as their servants. 'They' had power, but no precision. And for long ages, human beings served them faithfully, and were allowed insights into many secrets. And then their Masters had brought the great disaster upon themselves, something so cataclysmic that it had destroyed most of the human race. But before they succumbed, they saw their danger: that their servants would themselves become the masters of the earth, and learn the ancient secrets.