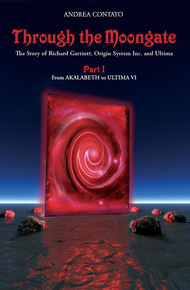 Born in 1976 in Italy, Andrea Contato is a researcher in history of videogames, a novelist and writer of non-fiction books and essays. Among his works, "Notizie dal Fronte" ("News from the front"), a day-by-day chronicle of the Great War, and Through the Moongate.

Through the Moongate by Andrea Contato

Richard Garriott is one of the most well-known personalities in the video game industry, and one of the last of its pioneers still in the business. Ultima, the revolutionary series of role-playing games he designed, and Origin Systems Inc., the company he co-founded in 1983, are inextricably linked to the history of videogames.

This is their story.

Andrea Contato's retrospective on Richard "Lord British" Garriott's Ultima series of RPGs is one of the most exhaustive of its kind. Split into two parts, Through the Moongate picks through every pixel of history until fans and newcomers alike command almost as great a knowledge as Lord British himself. – David L. Craddock

On October 12, 2008 at 07:01 UTC, the Soyuz TMA-13 space mission launched from the Russian cosmodrome in Baikonur. The crew consisted of three people: Commander Yury Lonchakov, a Russian cosmonaut on his third space mission, flight engineer Michael Fincke, a NASA astronaut from Pittsburgh, Pennsylvania, and a Texan passenger, the sixth "space tourist" in history, a wealthy video game developer.

The mission that brought Richard Garriott into space was the fulfillment of a long cultivated dream and the culmination of a career that had seen him excel in popularity and success, as a rock star in the video game industry. Being the son of a NASA astronaut, he had lived with the hope of following in his father's footsteps and going into space, becoming one of the first second-generation astronauts.

The occasion was also used to ensure a return to popularity for Tabula Rasa, the science fiction MMORPG Garriott had long worked on. Ever since the Texan developer was able to regain a place on the exclusive list of "space tourists", at a high price, his future adventure had been used as a showcase to bring his latest and most ambitious work to the public's attention.

The programmer remained in orbit for 11 days and 20 hours, during which he carried out some educational experiments proposed and designed by British schools, shot the first science fiction short-film made in space, and started his activity as an amateur radio host from the international space station ISS. With constant audiovisual connections, in addition to radio chats, he clearly showed the enthusiasm he felt for his experience, which cost him no less than 30 million dollars. Back on Earth, and still in quarantine, he signed a press release dated November 11, 2008, which NCsoft immediately issued, explaining how the journey had changed him and his priorities, pushing him to seek new interests and leave the development of video games.

It was painful and unexpected news for his fans and difficult to accept, but in a certain sense understandable, at least for the most sensitive or empathetic. However, the ranks of those much less indulgent, were more numerous. Industry journalists, game enthusiasts and players openly criticized, ridiculed and ranted about the millionaire who had bought a ticket to the stars and abandoned his latest creation upon return from space. With the harsh opinions and the poor results achieved by the advertising campaign of Tabula Rasa, which had used the space adventure of its designer in an attempt to increase publicity for the game, were immediately annihilated; and everything turned against the already worn-out image of Garriott's MMORPG.

The belief that Tabula Rasa would not survive the departure of its creator for long immediately spread. It didn't take long for fears to materialize in an official statement. On November 24, 2008 NCsoft announced the closure of Tabula Rasa for the end of February and the public's amazement and disappointment with Garriott quickly turned into resentment. In the eyes of many, the decision of the Korean software house could only be the direct consequence of the abandonment of its creative director and executive producer. A MMOPRG, more than any other game, requires a considerable investment of resources by its players, not only monetary, but especially in time spent to level-up their characters. Richard's departure made the Tabula Rasa players feel abandoned and the shutdown of the MMORPG made them feel betrayed.

From a professional point of view, his dismissal from NCsoft and the closure of Tabula Rasa was a painful debacle. The worst part of the story was that Garriott's already opaque image had suffered a very hard blow from which it was difficult to recover. The video game industry is often anonymous, focused on companies, hardware platforms and brands. Nonetheless, in Richard's case, the public had a close connection to a face and name, and this relationship had become sour. For better or for worse, Richard was now about to come to terms with the disappointment of his fans. From a prodigy, a rich and lucky entrepreneur, then to an innovator in the video gaming industry, a creator of worlds and new ways of playing and understanding RPGs, and finally an astronaut, Richard Garriott's career had been marked by great victories and difficult moments. In orbit around the Earth, he had reached the personal and professional peak of his existence. Similar to the trajectory of the rocket that brought him into space, after the apex Garriott experienced the descent, but without brakes nor parachutes.

What really happened during the days he spent on board the ISS and during his short stay in the Russian quarantine institution? What drove him to turn his back on his creation and let it shut down? What other interests would he want to pursue? How was it that he had to sell his home, Britannia Manor, in order to cope with sudden economic hardship? Did he really want to leave the video game industry, to which he made such an important contribution?

The poor success of Tabula Rasa had contributed to the idea that he had lost his acumen, the magic touch that made his works special, unique, successful and memorable. After contributing to the birth of a billion dollar industry, he caused and rode at the same time the boom of computer role-playing games [CRPG]. During that process, he created a historical company whose name survived in Electronic Arts' digital distribution platform, and anticipated, with brilliant intuition, the Internet revolution; creating a new subgenre that for over a decade had dominated undisputed above all the others. Garriott seemed to have really lost interest in the development of video games.

Was this really the case, though?

The true story of Richard Garriott, how he contributed to the boom of the video game industry and changed the way we play, founded one of the most influential software houses, met some of the most skillful developers, did business and clashed with companies well known in the history of video games, begins on Independence Day in 1961.