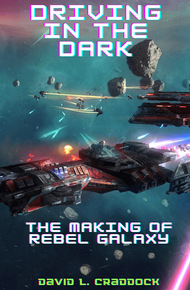 Driving in the Dark by David L. Craddock

For nearly 20 years, Erich Schaefer and Travis Baldree lived in the devil's shadow. In 1993 and 2000, Erich co-designed the seminal Diablo and Diablo II action-RPGs. In 2005, Travis created Fate, a colorful homage to Blizzard North's opuses. The success their games enjoyed spurred them to create a litany of spiritual successors over the years that followed.

Feeling stagnation creeping in, Erich and Travis left Runic Games, the company they had co-founded with Erich's brother, and embarked on a journey to create a new type of game — one far removed from sword-and-sorcery exploits.

Compiled from interviews with the developers, Driving in the Dark: The Making of Rebel Galaxy charts Erich's and Travis's journey to redefine themselves and their careers.

Their team: just the two of them.

What do one co-creator of Diablo and an indie developer who loved Diablo have in common? Diablo, and outer space, strangely enough. Erich Schaefer and Travis Baldree peeled away from companies to form a two-man company and build one of their dream games. I drew on my past to write this one, and love how it came out. – David L. Craddock

A dirt path cuts through the heart of Tristram's town square and leads into the mouth of the cathedral. The path is well trodden, frequented by millions of gamers offline and on Blizzard's free Battle.net service. Back and forth they walk, receiving convalescence from the healer, implements of steel from the blacksmith, and information as old and mystical as the town elder who disseminates it. Then they follow the path back to the cathedral, stepping into the blood-red light that pours from its maw, letting it swallow them whole.

Erich Schaefer knows that path better than anyone. He should. He paved it.

In 1993, Erich and his brother Max co-founded Condor, Inc., with David Brevik, a mutual friend they met while working at a clip-art company called FM Waves. They ran Condor on a shoestring budget, hiring programmers and artists to plug away at meager contracts for console games such as Justice League Task Force on Sega Genesis and a few football games for Nintendo's Game Boy.

Console games paid peanuts, but kept the lights on. Condor's big break came in the spring of 1995 when they pitched Diablo, a hack-and-slash RPG, to Allen Adham, cofounder of Blizzard Entertainment. The premise was simple, but addictive. Players chose one of three archetypical characters and then headed below the surface on a journey to Hell, harvesting randomized loot that burst from monster corpses. Diablo comprised 16 levels, each pieced together according to a series of algorithms that guaranteed a fresh experience every game. Erich was the architect of those levels; he painted individual tiles in dirt, stone, and fire, then worked with programmers to help develop the algorithms that arranged them in pseudo-random configurations.

By the end of 1996, Condor had been renamed Blizzard North, and Diablo had released to widespread acclaim and blockbuster sales numbers. Blizzard North followed up in 2000 with Diablo II, an even more ambitious game so popular that its multiplayer servers buckled under the weight of demand on its first day of sale.

Erich found his niche on Diablo II. Turning over painting environments to more capable artists, he immersed himself in spreadsheets. Like a mad scientist at the control panel of his latest creation, Erich tweaked numbers — damage values, equations used to determine reward probabilities, and other formulas. Then he would boot the game, see how his numbers panned out, and pull the spreadsheets back up to tighten more screws.

Three years later, Erich found himself in a slump. Blizzard North had ballooned from an intimate team of 15 people during work on Diablo, to over 60 after the release of Diablo II. The company had split into multiple teams working on projects that started hot only to fizzle out a few weeks or months later. At the end of July 2003, Dave, Max, and Erich got into a dispute over business terms with then-parent company Vivendi and were unceremoniously dismissed. The trio assembled their team in Blizzard North's main conference room and broke the news that they would be leaving the company they had built, effective immediately.

Deep down, Erich was relieved. Blizzard North had grown too big for his comfort. He wanted to get back to leaner, meaner days when he and a few close friends had worked together to create simple and addictive games. Two months later, Erich co-founded Flagship Studios in San Francisco with Dave, Erich, and several friends from Blizzard North. Their first and only game was Hellgate: London, a futuristic, Diablo-style game set in dystopian London.

Four years and millions of dollars in development costs later, Hellgate limped across the finish line. Reviews ranged from middling to poor. While many critics enjoyed the bleak and gritty visual style, as well as the hack-and-shoot gameplay and addictive loot system, others catalogued a litany of problems. The environments, procedurally generated like Diablo's, were drab and repetitive — consisting primarily of abandoned subway stations and streets cluttered with debris. The game crashed frequently, and the third-person medieval combat and first-person shooting seemed at odds: Hellgate, these critics declared, suffered from an identity crisis. It didn't know what it was supposed to be. Neither did its creators.

Rumors of Hellgate's awfulness have been greatly exaggerated.A It holds an aggregate score of 71% on Metacritic, sold roughly 1 million copies and, according to Erich, hit a peak of roughly 80,000 concurrent users on Ping0, Flagship's proprietary online service.2 The cofounders pleaded their case to their publishing partners.

"We said, 'Hey, guys, we need money to continue and get this game into shape, and keep making ongoing content like we promised everybody,'" Erich explained, referring to Flagship's promise of a monthly fee or lifetime subscription for Hellgate: London that guaranteed players exclusive content. "Nobody really wanted to foot the bill on that. They all had too small a piece of the pie, and we kind of exploded because these business relationships which we thought were brilliant, kind of weren't."

By the summer of 2008, Flagship was hemorrhaging money. Flagship's cofounders made a list-ditch effort to salvage the company by approaching a partner who agreed to cut a check, only to back out at the last minute. "They were probably wise to do so, honestly. I won't name the company," Erich admitted.

In mid-July, Erich relived the nightmare of his final hours at Blizzard North. Together with his cofounders, he called Flagship's 125 developers into a conference room and broke the bad news. "That was kind of... I still think of that as the worst day in my career, and one of the worst days of my life, really — when we had to call in everybody and say, 'You know what, everybody? We keep trying to put [on] a positive face, but this thing's done.' We had to send everybody home."