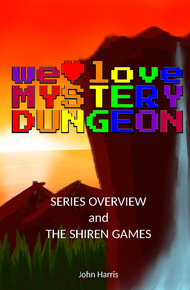 The Mystery Dungeon series, from Chunsoft, is a brilliant distillation of roguelike concepts into console game form. It's also very obscure in the United States, the land that originated roguelikes in the first place.

Neophyte wanderers and weasel wannabes take note! This book aims to reduce that obscurity. If you know nothing about roguelikes, we'll get you started. If you know of Mystery Dungeon but very little else about it, we have something to say about every Mystery Dungeon game made to date, around 30 of them! And we also hope to get you interested in the Shiren the Wanderer series, the best of all the Mystery Dungeon games. We even provide quite a sizable Japanese cheatsheet to help you figure out what all the many items in the Shiren games are, which is the biggest barrier to a native English-speaker getting into the series.

It's a crash course in an awesome series. Read it and… well, you're still going to die a lot. But at least you'll be able to appreciate dying a lot more!

Since gaming grew into a multibillion-dollar industry, the experiments indie developers perform on known genres tend to get lost in the shuffle. John Harris excels at shining a light on the best of these experiments, and his latest work examining the trappings of the We Love Mystery Dungeon games, including a language cheat sheet, lives up to his reputation. – David L. Craddock

I first encountered word of Mystery Dungeon and Shiren the Wanderer from a pair of ancient Usenet posts. […] I didn't get to actually play it until almost a decade later, and I was amazed. This is a lot like Rogue, which is awesome! It actually improves on Rogue in some ways: more monsters have special powers, more interesting and useful items, new item types, new decisions to make, between-run subquests, and a lot more! And wow does it look pretty in some places, a lot better than ASCII characters anyway!

Well now guess what? There's a ton of Mystery Dungeon games now! For a series that always seems on the verge of ending entirely its managed to amass around 30 titles, although some of those might not technically be Mystery Dungeon games—the Chocobo's Dungeon and Nightmare of Druaga games have some aspects that aren't like the others. And a few of them seem to be infested with something called "Pokemon," whatever those are. Still, for the most part, they are an amiable and friendly bunch of games, that would dearly like you to invite them into your home so they can suck out all your blood. Enjoy!

The aim of this book is to get you really interested in this niche but charming bunch of games. In particular, Shiren games are challenging, and you'll probably die a lot. You cannot let this get you down. Have you ever played a classic arcade game, like Pac-Man or Asteroids? Do you get upset when you lose at one of those? You don't, or you shouldn't at least, because they're games in which you're meant to fail, eventually. Mystery Dungeons are the same, or at least, they work best that way. Losing is not a judgement against your playing skills. There are Mystery Dungeon games that cater to a more traditional JRPG audience, the Wii version is a good example, and I think those are boring! It is possible to get good enough to win at a solid Mystery Dungeon game, but you should still expect to lose. The life of a wanderer is a harsh one, but they bounce back well. If you approach them in this spirit you will have a good time.