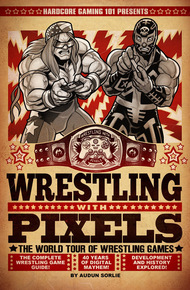 Audun Sorlie is an author and game producer. He is most well known for his complete retrospectives and work in video game music.

Kurt Kalata is an ardent video gamer from New Jersey. He has founded websites such as The Castlevania Dungeon, which focuses on Konami's long running, vampire slaying series, and Hardcore Gaming 101, which gives comprehensive reviews focusing on the history of gaming. In addition to his own sites and books, his writings have appeared in Retro Gamer magazine, The Overstreet Guide to Video Game Collecting, and at 1up, Siliconera, Gamasutra, and Nintendo Life.

The very first true wrestling video game would be none other than Technos Japan's Big Pro Wrestling, better known as Tag Team Wrestling in the West. Released shortly after New Year's of 1983 in Japan, this was the game that would lay the foundation for all others to come, and one which would go into history for more than one reason. The game was directed in part by Yoshihisa Kishimoto, a man no stranger to fisticuffs and fights himself. As a reckless youth often finding himself on the better end of a brawl, Kishimoto would eventually be able to draw on his earlier years to define what action games could be with his later releases of Double Dragon and Nekketsu Kouha Kunio-Kun, with the latter even being directly based on his own experiences. With Tag Team Wrestling, there's an immediacy and thrill to the combat that had yet been seen in video games, and the fluid controls made players nearly feel the impact and action in their fingertips.

The game focuses solely on tag team wrestling and features four wrestlers, Sunny and Terry (Jocko and Spike in the West) as the playable babyfaces and The Heels (Mad Maulers in the West). The player must beat The Heels ten consecutive times in order to be crowned the world tag team champions. There is a large repertoire of moves to draw from, including Inoki's signature Abominable Stretch (AKA the Cobra Stretch), Body Slams, Drop Kicks, Pile Drivers, Suplexes, the essentials are here. The game doesn't restrict itself to the ring either, allowing the player to take the action outside the ring. In this state, the game allows for the use of the turnbuckle bar to be used for a head bashing maneuver to keep the wrestler out for the ten count. The Heels manager will even get involved by hitting the player with a cane for some major damage.

The sound makes use of an impressive amount of digitized speech, mostly reserved for crowd noises and referee callouts, however the quality of these samples were quite low in this era of gaming, and today will sound more like white noise rather than audible speech. It's clear that the developers were well aware that in order to showcase the sport, the action had to be free moving, organic and surprising, and for a first attempt at a brand new genre, it is quite an achievement.

Have you dreamed of putting your friends in a headlock and driving their head into the mat with a picture-perfect DDT? We all have, but don't do that. Seriously. Instead, sublimate your fantasies by letting Kurt Kalata take you on a colorful journey through classic and classic-inspired wrestling games. It's an excellent trip down memory lane for any wrestling fan. – David L. Craddock

Namco is basically a company with dual histories. Internationally, they're known for games like Pac-Man and Galaga, groundbreaking classics in the golden age of arcade gaming. In Japan, however, they also had a reputation for their offbeat, quirky output, often based on creating unique and interesting characters. Since they relied on overseas partners for their distribution, Americans and Europeans never really got to see most of these titles, at least until both MAME and the Namco Museum line gave them greater exposure.

This digest seeks to cover both of these aspects of Namco's history. For the "popular" side, I chose Dig Dug and Mappy. Dig Dug was fairly well known, though it also had plenty of sequels that tend to be forgotten, which are fun to explore. Mappy, on the other hand, never quite caught on the same way, at least in America. Since it wasn't really ported as extensively as Namco's other games, I didn't experience it until long after its prime, at my bachelor party at the Barcade in Jersey City. All the same, I was immediately enamored with it, and I hope to help explain its appeal to those who have yet to discover the title.

For the company's "quirky" side, I picked a lot of games that I had never really heard of until the 2006 release of Namco x Capcom for the PlayStation 2. It wasn't localized, and probably one of the reasons was because so many of the Namco characters were unknown. There was Bravoman! And Wonder Momo! And the kid from Youkai Douchuuki (Tarosuke)! And the dude from Genpei Toumaden (Kagekiyo)! Some of these games weren't necessarily great, but they did speak to an era that's largely unknown to English speakers, and I wanted to explore this further. A few other interesting games, like the highly underrated Outfoxies, and the forgotten multimedia project Mirai Ninja, are included here as well. Honestly, this edition only scratches the surface of Namco oddities, as there's so much else out there (Tower of Druaga, Numan Athletics, so many weird Pac-Man games) we could definitely do another volume.