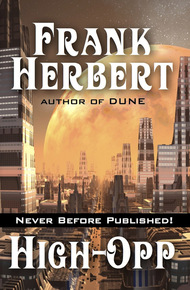 A never-before-published novel by Frank Herbert, author of the international bestseller Dune.

That is the rallying cry of the Seps, the Separatists engaged in a class war against the upper tiers of a society driven entirely by opinion polls.

Those who score high in the polls, the High-Opps, live in plush apartments, with comfortable jobs, every possible convenience. But those who happen to be low-opped, find themselves crowded in Warrens, with harsh lives and brutal conditions.

Daniel Movius, Ex-Senior Liaitor, rides high in the opinion polls until he becomes a casualty, brushed aside by a very powerful man. Low-opped and abandoned, Movius finds himself fighting for survival in the city’s underworld. There, the opinion of the masses is clear: It is time for a revolution against the corrupt super-privileged. And every revolution needs a leader.

People averting their faces as they walked past the office door finally wore through his numbness. Daniel Movius began to clench and unclench his fists. He jerked out of his chair, strode to the window, stared at the morning light on the river.

Far out across the river, in silver layers up the Council Hills, he could see the fluting, inverted stalagmites of the High-Opp apartments. And down below them, the drabness, the smoke, the dismal carpet of factories and Warrens.

Back into that? Damn them!

A man walked past the door, examined the blank opposite wall of the corridor. Movius raged inwardly. Sephus! You son of a Sep! A woman followed. Bista! I’d as soon make love to a skunk!

Yet only yesterday she had made courting gestures, bending toward him over her desk to show the curves under the light green coveralls.

He hurled himself into his chair, sent the angry thoughts after them, the words he dared not use. “Avert your faces, you clogs! Don’t look at me!”

Another thought intruded. In Roper’s name, where was Cecelia? Was she another averted face?

Two men appeared in the doorway pushing a handcart loaded with boxes. Movius did not recognize them, but the LP above their lapel numbers told him. Workers. Labor Pool rabbits. But now he was one of the rabbits. Back into the LP. No more special foods at the restricted restaurants, no more extra credit allowance, no Upper Rank apartment, no car, no driver, no more courting gestures from such as Bista. Today, he was Daniel Movius, EX-Senior Liaitor.

One of the workmen at the door coughed, looked at the desk plaque which Movius had not yet removed. “Excuse me, sir.”

“Yes?” His voice still held its tone of command.

The workman swallowed. “We were told to move the Liaitor files to storage. Is this . . .”

He could see the workmen’s manner change. “Well, if you’ll excuse us, we have work to do.” The men came in with an overplayed clatter of officiousness, banging the handcart against the desk. They turned their backs on him, began emptying files into boxes.

Movius finished dumping the contents of his desk drawers into the wastebasket, topped the pile with his name plaque. He saved only a sheet of pale red paper. The message chute had disgorged the paper onto his desk less than an hour ago, as he’d been sorting the morning mail.

“On this date, the Stackman Absolute Sample having been consulted, the governmental function of Liaitor is declared abolished.

“For tax economy reasons, would you favor elimination of the supernumerary department of Liaitor?

“May the Majority rule.”

One last look around the office. It was a big place, scaled for a large man, an orderliness to it under the apparently random placement of desk, filing cabinets, piled baskets of papers. There was a smell about the room of oily furniture polish and that kind of bitter chemical odor found in the presence of much paper. It was a room with an air of dedication and no doubt about it. Dedication to quadruplicate copies and the-right-way-of-doing-the-job.

Movius noted that his phone had been dislodged from its cradle beside the desk. He replaced it, ran a hand through his stubble of close-cropped sandy hair, unwilling now that the moment had come, to say goodbye to this space in which he had worked four years. The room fitted him like an old saddle or like the body marks in a long-used bed. He had worn his grooves into the place.

Low-opped! And with so much unfinished work. Bu-Opp and Bu-Q were going to be at each others throats before the month was out. The government was damned soon going to find out it had need for Liaison. The bureaus were too jealous of their domains.

He stared at the workmen. They had cleared two files, were emptying a third. Movius was ignored; another discard to be stored away and forgotten. He wanted to fling himself on the men, knock them into a corner, scatter the papers, wreck things, tear things, destroy. He turned and walked quietly out of the office, out of the building.

On the front steps he paused, his eyes seeking out his parking slot in the third row. There was Navvy London, the driver, leaning against the familiar black scarab shape of the car. THE CAR—a primary token of authority. Sunlight shimmered on the flat antenna which spanned the curving roof. Movius looked up to the left where the scintillant red relay ship hovered above the spire of the prime generator, sending out its invisible flagellae of communication and energy beams from which the city sucked its power.

He wished for the strength to hurl all of his pent-up curses at this symbol of authority. Instead, he lowered his eyes, again sought out the car, that tiny extension of the relay ship. Navvy leaned against the grill in his characteristic slouch, reading a book—one of those inevitably deep things he always carried. The driver pulled at his lower lip with thumb and forefinger, turned a page. Movius suspected that some of Navvy’s books were on the contraband lists, but the man was the kind to carry it off. A look of youthful innocence in his brown eyes, a wisp of black hair down across his forehead to heighten the effect. “A contraband book, sir? Great Gallup! I didn’t think there were any more of those things drifting about. Thought the government had burned them all. Fellow handed it to me on the street the other day when I asked what he was reading.”

Seeing Navvy brought back a disquieting thought: How had Navvy known about the low-opp? How did a Labor Pool driver get official information before it became official?

Movius slipped between the First Rank cars, the Second Rank cars, slowed his pace as he approached the relaxed figure of the driver.

Navvy sensed Movius’ presence, looked up, pushed himself away from the car. His young-old face became contemplative. “Now do you believe me, sir?”

Movius drew a deep breath. “How did you know?”

The contemplative look was replaced by casualness. “It came over the LP grapevine.”

“That’s what you said before. I want to know how.”

“Maybe you’ll find out now that you’re an LP,” said Navvy. He turned toward the car. “Anyplace I can take you? They haven’t assigned me yet. They’re still upstairs wrangling over who’ll get my carcass.”

“So it’s forbidden.” He opened the rear door of the car. “They know where they can put their forbiddens. One last ride for old time’s sake.”

Why not? thought Movius. He shrugged, slipped into the car, felt the solid assurance of the slamming door. Navvy took his place in front.

“The apartment, I guess.”

Navvy flicked the power-receiver switch, turned to back the car from its slot. Movius watched the concentration on the man’s face. That was one of Navvy’s secrets, a power of concentration, of storing up. But what about the other secret?

“Why won’t you tell me how you came by the information?”

“You’d only accuse me of being a separatist again.”

Movius felt a humorless smile twitch at his lips, remembering their conversation that morning on the way from the apartment. Navvy had said, “Sir, probably I shouldn’t be talking, but I’ve word they’re going to low-opp you today.”

It had been an ice-water statement, doubly confusing because it came from his driver, someone like an extension of the car.

“No, sir. It’s over the grapevine. The question was put on the eight o’clock.”

Movius glanced at his watch. Ten minutes to nine. They almost always were passing the Bu-Psych Building about this time. He turned. There was the grey stone pile, early workers streaming up the steps.

A question on the eight o’clock? Movius could picture the returns ticking into the computers—Shanghai, Rangoon, Paris, New York, Moscow. . . . The Comp Section, working at top speed, could have results in two hours. It was impossible that anyone could know the results of an eight o’clock before ten. He explained this fact to Navvy.

“You’ll see,” said Navvy. “Those autocratic High-Opps have you picked for the long slide down.”

And Movius remembered he had chuckled. “The government doesn’t function that way, Navvy. Majority opinion rules.”

What a trite set of mouthing’s those were when he thought back on them. Right out of the approved history books. Right out of the Bureau of Information blathering. But these thoughts brought a sense of uneasiness. He twisted his lapel, looked down at the pale mauve and white of his coveralls, code colors for Tertiary Bureau heads. All of his clothes would have to be dyed. He fingered his identification number on the lapel, the red T stitched above the number. That would be ripped off, LP replacing it.

Penalty service could scarcely be worse.

Movius wondered if the word already was out to his apartment manager.