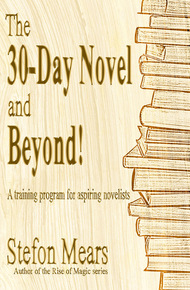 The 30-Day Novel and Beyond! by Stefon Mears

Develop the skills and habits of professional writers!

Would you like to write a novel in 30 days?

Stefon Mears asked himself that question back in 2007, and created a training program to turn his dream into a reality. Today he writes several novels a year, dozens of short stories, and more.

In this book, he shares with you the system that started him on the road from "aspiring novelist" to "professional novelist."

Within these pages, Stefon covers
•The tools you'll need
•How to prepare
•Ideas, and how to generate them
•How to develop the habit of writing
•What to do if you get stuck
•How to write that novel in thirty days
•What to do with that novel when you're finished
•And much, much more!

Back in 2007, Stefon finished that 30-day novel in twenty-two days, and has gone on to write another two dozen, with more coming every day.

How many will you write?

So many of you want to write a novel, but the idea of writing one seems like an overwhelming task. In this book, Stefon takes you from aspiring writer to novelist in thirty days. Stefon followed the plan himself, and now has a full-time writing career. It works! – Kristine Kathryn Rusch

I've wanted to be a writer most of my life.

Heck, I remember graduating from college back in 1992 and talking to my father one night about my wanting to write professionally.

He liked the idea. Fully supportive. I could've gone for it.

But then I read an interview with Harlan Ellison. I don't remember where I read it, or what his exact words were, I'm afraid. But I'll always remember the essence of one thing he said.

He warned, basically, that writing was a hell of a way to make a living. That no one should do it unless they couldn't do anything else.

Now, for context, I grew up in a house full of books. Including many written or edited by Ellison. I couldn't tell you how many times the man and his stories came up in family conversations over the years.

So when I read that interview, I took the implicit advice from a man I'd never met.

I tried to do anything else.

For more than ten years, I tried to do anything else. I must've tried my hand at more than a dozen different office jobs. But each time I somehow ended up writing and editing.

I edited reseller contracts for Hewlett Packard. I clarified English translations of Japanese video games. I wrote procedural and technical documents for companies so small they probably don't exist anymore. Advertising copy. Fundraising letters. Grant applications for a private school. And more. So much more.

Didn't matter where I worked or what my job title (or official duties) were. I ended up writing and editing.

Yet somehow, that wasn't enough to give me the clue I needed.

My moment of revelation came one evening while I sat reading on my bed. I had the album Soul Cadillac by the Cherry Poppin' Daddies playing in the background.

The song "Irish Whiskey" came on. It's about a man who abandoned his dreams for the sake of making money for his family. Now he's old. He hates his life. He resents his family. And all he has is Irish whiskey.

Cold fear jolted the book out of my hands. Washed over my skin. Prickled the back of my neck.

A moment of true mortal terror that one day I would become that man.

I started writing again that night.

Only problem. I had no real idea what I was doing.

I agonized over every word. Every sentence. And I often went back and re-wrote whole passages because I thought I might be using "to be" verbs too often.

I struggled. I did everything wrong. But I kept at it.

Took me six months to write a short story.

It got rejected, of course, from the first place I sent it. Not because the story was bad, either, though I didn't understand that at the time.

No. It got rejected unread because I hadn't followed standard manuscript format. Didn't even know what it was.

I had the will. I had the ideas. But I lacked the skills. And I wasn't sure how to go about getting them.

I twiddled about that way with writing for a couple of years. Occasionally flinging words onto the page with wild abandon, then spending weeks agonizing over a scant few pages.

I did a lot more thinking than writing. And finishing anything at all was a major effort.

My biggest accomplishments during that period were a handful of credits in the world of roleplaying games. I might have tried to go that direction full time, but bad experiences had soured me on the industry.

Finally, I reached a point where I had to admit I was getting nowhere. I needed to either commit — find and take some classes, learn what I was doing, and really go for it — or I needed to quit pretending and do something else.

I realized then, I didn't really trust that I could do it. That I could write even one novel, let alone several.

I dithered about in my writing because that was the safe thing to do. I could call myself a writer, without the risk of finishing something and giving it to people to read.

Maybe even having the audacity to charge something for my efforts. What a concept.

I needed a litmus test. Some way to either prove to myself that I could really write, or demonstrate that I should give up and do something else.

It also sounded like something that a professional writer should be able to do.

Yes. I decided to take their thirty-day novel challenge, and let the results prove whether or not I could make it as a writer.

On November 1st, 2007, somewhere around eight o'clock in the evening, I sat down and started writing my first novel. Twenty-two days and about fifty-four thousand words later, I finished it. Telepathy 1A, the struggles of a college freshman who spontaneously develops the power to read minds.

As of this writing, I've published more than twenty novels, another dozen or so novellas, and more than a hundred and thirty short stories.

And I have more coming all the time.

But here's the thing.

Every November, a great many people across the world take a similar challenge and try to write a novel in thirty days. The vast majority of them don't go on to start careers in writing.

For some of them, that might be by choice. But for others, it might be that they're doing it wrong.

That's why I'm writing this book. To talk about how to use a thirty-day novel challenge the way I did.

To use it as a test about whether or not you, too, could have a career as a writer. And maybe to help you get started on that career.

I've got my fingers crossed for you.