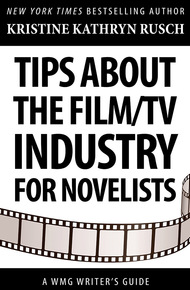 But any writer who ventures into Hollywood alone or with an agent as their guardian actually walks buck naked and unarmed onto a battlefield filled with trained soldiers poised to strip that writer of everything that matters most to them, including the rights to their own work.

In this invaluable guide, award-winning and New York Times bestselling author Kristine Kathryn Rusch offers novelists an arsenal of survival tools and tips for the unwary.

I've made a lot of money in the TV/film industry. One reason? I never let anyone do anything for free. This little book, inspired by some events in 2021, models the attitude you should have when someone from film or TV comes to call. And if you write novels, believe me, someone will contact you. What happens next could make or break your entire writing career. – Kristine Kathryn Rusch

I do a surprising amount of business in the movie/TV industry. Yet, to date, no adaptation of my work has hit any kind of screen. This is not unusual. Many writers have made a lot of money off what I will casually and incorrectly call Hollywood without ever having a project begin filming, let alone make it to national or international distribution.

Yet many writers have had their books adapted into movies or television, and have made no money at all. In fact, most writers who find themselves entangled with Hollywood end up losing a lot more than they gain.

Writers ask me all the time to help them negotiate their journey in the film/TV industry. I willingly help some writers and am purposely vague with others. This isn't a reflection of our friendship, but a reflection of the other writer's ability to understand the ins and outs of business, contracts, negotiation, and copyright. If the writer doesn't understand those things, even after years of hearing me harp about them, then that writer isn't going to make a good decision when someone from the film/TV industry comes calling, no matter what kind of advice I give.

Other writers have ended up doing better than I have ever done—meaning they have negotiated better deals, not that their work has hit the silver screen.

Then there are things I can tell you generally that will set you on the road to finding out how to do this work yourself. If you don't read my weekly blog on the publishing industry, then you don't know that my views about that industry and its ties to the film/TV industry, have evolved over time. The soundest advice I can give all of you is this: Do not hire an agent to take your work to the film/TV industry. Hire an entertainment attorney should the time come.

You'll find other important advice in here, such as make sure you understand licensing and copyright, learn how to do preliminary negotiation yourself, and watch out for traps that entangle the unwary—which is most of you.

One other thing you need to know: As I said above, I casually and incorrectly use the term "Hollywood" when I actually mean the film/TV industry. Thirty-year-old habits die hard. The word "Hollywood" in this context wasn't accurate thirty years ago; it's less accurate now.

But for the sake of this particular little book, assume this: When I say "Hollywood," I mean the movie/TV industry, and I am most likely talking about the biggest one still, the one based in the US.

What will remain the same is this: When someone from Hollywood approaches a writer for the right to license that writer's work, that someone has a bevy of sharks behind them, ready to negotiate a contract that will give as much of the writer's work to that someone as possible. These someones are charming and friendly and many are good-hearted, even if their sharks are not. But that doesn't change the fact that a writer who ventures into Hollywood alone or with an agent as their guardian actually walks buck naked and unarmed onto a battlefield filled with trained soldiers designed to strip that writer of everything they value.

It has been that way since the 1920s, and most likely, it will be that way in the 2120s. The right deals with the film/TV industry can make a writer a lot of money even if the project never gets filmed. If the writer is lucky to have a good deal on something that is filmed, the writer will make a large fortune.

The wrong deal—well, it can strip a writer of any ownership in their own property. The writer might not even be able to write in that series again. And that can happen even if the project never gets filmed. It can happen—and often does.

Use this little book as an introduction to the right way to think about film/TV deals. Use it as the beginning of your research into this fascinating and cut-throat industry. Once you finish the last page of this volume, read everything you can about other writers' deals. Read the contracts at the heart of court cases. Ask why Writer A got their name on the credits and Writer B's book was never mentioned, then do a deep dive to figure out what happened.

Read the cautionary tales. Learn from other people's mistakes.

There are very few good books on this topic from a book writer's point of view. The information lives in casual mentions in biographies and articles about productions. The information also lives in the sour grapes tales from bitter writers who weren't protected when they walked on that battlefield.

My language is a little rough in here because this topic riles me up. If nothing else, the language might get you to pay a little more attention.

I'm writing this book because I hate seeing writers get screwed. And yet, I'm being vague to make sure that I protect myself and the other writers who have learned how to negotiate this tough field.

If you contact me about writing for the film/TV industry, I will refer you to this book. If you tell me that you've received a nibble from a Hollywood producer, I will tell you to learn copyright and get an entertainment lawyer. I do not hire my services out. I am not an agent. I am not a lawyer.

I'm just a writer who values her work. I want to make sure that I, as the creator of content which interests outside parties, get my fair share of a licensed property based on my work.

I hope this little book puts you on the path to having that same attitude.

Yes, you will make mistakes when you are confronted with someone from the film/TV world. Don't make the same mistake twice. And don't get greedy.

Learn copyright, hire a lawyer, and write the next book.

You'll be glad you did.