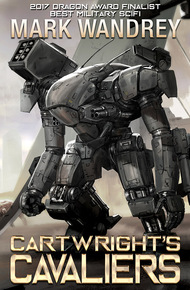 Living life as a full-time RV traveler with his wife Joy, Mark Wandrey is a bestselling author who has been creating new worlds since he was old enough to write. A four-time Dragon Award finalist, Mark has written dozens of books and short stories, and is working on more all the time. A prolific world builder, he created the wildly popular Four Horsemen Universe as well as the space opera Earth Song series, and Turning Point, a zombie apocalypse series. His favorite medium is military sci-fi, but he is always up to a new challenge.

Find his books on Amazon at https://www.amazon.com/Mark-Wandrey/e/B00914T11A/

Heir to one of the leading "Four Horsemen" mercenary companies, Jim Cartwright is having a bad year. Having failed his high school VOWS tests, he's just learned his mother bankrupted the family company before disappearing, robbing him of his Cavalier birthright.

But the Horsemen of eras past were smart—they left a legacy of equipment Jim can use to complete the next contract and resurrect the company. It's up to Jim to find the people he needs to operate the machinery of war, train them, and lead them to victory. If he's good enough, the company can still be salvaged.

But then again, he's never been good enough.

"On it," the older 1SG replied. "Decoys!" he ordered. All eleven CASPers landed and fired one of a pair of decoy pods they carried. The pods flew up a dozen yards and popped, releasing strings of sensor tape, flares, and smoke. The ECAS dove on the Cavaliers' CASPers only to find nothing to aim at. The ground was covered in hundreds of overlapping targets. The frustrated pilot, having no clear targets to aim at, unleashed a long strafing run with the craft's underslung railguns. Hypersonic slugs tore up the wintery landscape, exploding frozen trees and shattering rocks and ice. No rounds got within a foot of a Cavalier.

"Simpson," Buddha called out, "splash it."

As the craft passed over, a multi-ducted fan gunship identified as a Piqui 104, one of the squad's two anti-air equipped troopers fired on it. The two-megawatt, chemically-fired laser pulsed faster than the eye could follow, punching a series of holes in the craft's starboard wing that compromised a primary drive fan. The blades, spinning at more than 30,000 rpm, exploded spectacularly. It yawed hard to the right, then corkscrewed down. The pilot fought the controls all the way down as the craft spun faster and faster, until it slammed into the ridgeline with a thunderous flaming crash. There was no ejection; the pilot fought it to the end. Jim hoped there weren't many more of those, his squad only had one more pod each.

"Affirmative," Jane's voice came in, the sound of her engine's scream already audible over the radio, indicating she'd begun taking off as soon as the enemy Piqui had attacked. Jim had stopped climbing as the air attack took place. His arms were starting to ache. Despite the suit's enhancements, he was becoming exhausted.

On the other side of the ridge, his squad had spread out as the troops on the tanks unassed and began engaging them. As the platoon commander, Jim had detailed readouts on all the men under him, so when the first one took a hit, he saw it. And the second. Jim sucked in his breath as the trooper's suits handled the damage. No injury to the operators noted. He heaved a palpable sigh of relief.

The last two operational tanks were trapped on their chosen path. Faced with destroyed vehicles front and back, they cut sideways to the edge of the dry river bed they'd been moving along and found several large boulders to maneuver around that allowed them to present a hull-down defensive position. Their troopers rallied on that position. It was starting to look like they'd dig in when Phoenix 1 screamed over and strafed them with dual streams of railgun rounds. A split second later, Phoenix 2 followed on a parallel path. Jim was just cheering the air attack when he saw it. The sixth damned tank, and it was a heavy.

"I got that last tank," Jim said over the command net.

"Observe and stand by," Murdock said.

"We'll have these in hand shortly," Buddha agreed, his transmission interspersed with the thudding of his CASPer firing its magnet accelerator. "We can be there in a few minutes."

Jim examined his battlespace. The tank was massive. It had to be one of the fusion-powered beasts he'd read about. Which meant shields and energy weapons. It was heading down the same gap the APC had taken; the tank was heading toward Second Squad, and fast.

"Jim," Hargrave said, "we're in position. What are you doing?"

"Leading the charge," Jim said as he jumped out from the rock wall.