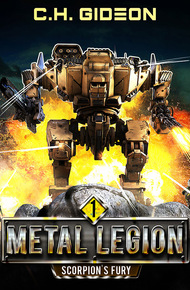 I see my other lives, a career in the Marines, then law school, and finally a business consultant, as if they're stories from a book. I see my books as if I lived there, as if I were friends with the characters. I base my books on my real-life experiences – more than twenty years in military intelligence and working with the three-letter agencies.

Visit my web page, craigmartelle.com for the latest posts and updates or find me on Facebook, Author Craig Martelle. Send an email to [email protected] to join my mailing list for the latest on new releases, information on old releases, and anything related to my books, or simply follow me on Amazon - they'll notify you of my new releases as will BookBub.com if you follow me there.

Who kicks off the battle? Cannon fodder. Soften up the enemy. The Metal Legion. Old mechs crewed by former prisoners with nowhere else to go. They bear the brunt of the pain.

But they don't want to die. Never fight fair when fighting for your life. This is the motto of the Metal Legion. They fight to win.

Humanity reached for the stars, but then did what humans do best. They disagreed and went their separate ways. The Terran Federation and the Solarians. The Solarians did their thing. Terra did another. The Terran Federation negotiated with the aliens and signed treaties so they could use the wormholes. Then the aliens reneged and showed up in warships filled with soldiers...

The deck bucked beneath Xi Bao's pilot chair violently enough to jostle her neural link, temporarily interrupting Elvira's data streams and giving Bao a wave of intense vertigo before the links were restored.

"Kill that fucking nest, Podsy!" Bao snarled as she struggled to keep Elvira stable. The fifteen-meter-long mech's six spider-like legs scrambled to stay upright amid the hail of ordnance coming from the enemy position, a bunker Elvira had stumbled upon seconds earlier.

"Give me a quarter-second firing window," Podsednik snapped back, his voice transmitted via the mech's hard-lines.

In spite of the rounds hitting the armor, and the impacts disrupting the ground beneath its legs, she managed to steady the ungainly mech. Just as Xi opened her mouth to rebuke her engineer-turned-gunner's tardiness, he sent an archaic fifteen-kilo slug, Elvira's second-most-potent weapon, into the enemy's nest.

Even with the short-range 'soft-loaded' ammunition, the sound was terrifying, and the recoil doubly so. Elvira's front legs lifted a full two meters off the rocky ground as every kinetic compensation system kicked in to counteract the force of the blast. Where the enemy-filled nest had been, nestled beneath the surface of the volcanic rock-field, now a smoking crater lined with shrapnel and charred lumps of flesh remained. Nothing, not even a Marine in state-of-the-art armor or a mech like Elvira, could survive a point-blank hit like that.

After the mouth of the subterranean 'nest' was silent for a few seconds, Xi Bao breathed a sigh of relief. "Lucky shot," she snorted as she processed a stream of damage reports from Elvira's active compensation systems.

"You're a real bitch, you know that?" Podsy retorted.

"Takes one to know one."

"Oh, fuck off," he snorted. "And don't do it up there, that's not why they call the manual controls 'joysticks.'"

"One for you, Podsy," she laughed before an alarm went off on her HUD—her heads-up display. "We've got a blown stabilizer on five," she said, transmitting the relevant information to Podsy's console.

"Probably just the hydraulic safety tripping again," he said confidently after a rapid perusal of the data. "I'll reset it."

"Copy that," she acknowledged as she swept the nearby area for more contacts and found none, not even the humans which should have been in range of Elvira's thermal imagers. "Where the hell is our infantry, anyway?"

Podsy used the crawlspace between Elvira's segments to get to the panel where he could manually reset five's safety circuit.

"Captain Murdoch said the force was exposed, so he pulled them back to the center. He must have been confident that we'd have things covered over here," Podsy drawled. "Frankly, with your winning personality, I'm amazed they didn't go AWOL and plaster themselves as meat shields on Elvira's armor to defend your virtue."

"Captain Murdoch. Like we needed a ground pounder rank between Lieutenant and Lieutenant Commander, but there it is."

She snorted with derision before addressing Podsy. "If the rock-biters counterattack during this push—" Bao grimaced, ignoring his dig at her notorious prickliness. "—we're going to be stuck out here on the flank with no support. I haven't registered a drone sweep through our quadrant in the last forty minutes. Mechs aren't designed to operate solo, especially not mechs with systems that are as old as our great-great-grandparents!"

"I think you underestimate our girl," he replied and drifted off as a new stream of data came pouring in through his helmet's HUD. "Is five showing online?"

Bao checked the stream and nodded in relief. "It is. Good work. Now get us off the skyline."

Podsy scampered back to his position.

"What," he quipped, "I'm not lucky this time?" Elvira started flexing her legs, preparing to navigate the rubble of her last engagement.

"It's better to be lucky than good," Bao riposted.