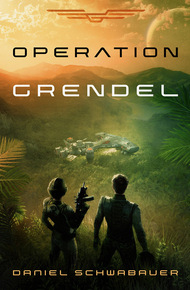 Daniel Schwabauer, M.A., is a lifelong reader of speculative fiction. He studied the genre under science fiction great James Gunn before graduating with honors from Kansas University's Masters program in Creative Writing. Winner of the Eric Hoffer and Ben Franklin awards for his middle grade fantasy series, The Legends of Tira-Nor, Daniel enjoys riding his motorcycle on country roads and pondering other worlds. He lives in Kansas City with his wife and dog.

It's the war story he's dreamed of. But the battle may cost him his mind.

But when his commanding officer, Captain Ansell Sterling, is fatally wounded before the negotiations can begin, Dahl can no longer just report on the mission. He's ordered to complete it. With help from the AI embedded in Sterling's comms bracelet, Dahl must impersonate his commander—a Marine Corps hero and psychological operations expert.

However, Sterling's AI may be luring him to surrender more than he realizes. And the mission Corporal Dahl thinks he's running isn't the only operation underway.

In this case, I had to become someone else in order to get the story. I'm not who I say I am.

My name isn't Ansell Sterling, and I'm not a captain. I'm not even a marine.

The only military training I've ever had was grunt basic, just after I joined the reserve infantry back on Kanzin.

The real marine died at Camp Locke, New Witlund, during the grendel invasion of Quelon. Captain Ansell Sterling took a round through his right lung and choked on his own blood in an air-conditioned office.

A few minutes after he died I stole his identity, along with his comms bracelet.

My name is Corporal Raymin Dahl.

I'm a military journalist for the Orbits News Syndicate, and I'm going to show you what happens when you compromise with the grendels. Even if that means a court-martial.

Since I don't have the recordings from my own comms, I'm writing this old-school, fingers to pad, with no input from my AI.

Sterling agreed that if I went through with his mission, I could write the story however I wanted.

So this is how I want to do it. A war story by Raymin Dahl that finally tells the truth.

Which sounds more courageous than it is. For me to face a court-martial, I'll have to survive long enough to load this story into the net.

And really, what are the odds?