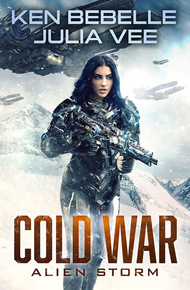 Julia Vee likes stories about monsters, money, and good food. Julia was born in Macao and grew up in Northern California. She is a graduate of the Viable Paradise workshop.

Ken Bebelle makes arms and legs by day, and makes stories by night. He lives in Orange County, CA and loves eating snacks that are unhealthy for him.

Looking up, Cam spied the jumpship racing towards them. Fuck. The engines whined as the ship flared to a hover. She watched six hulking Ringheads leap from the craft, landing easily on the ground and begin bounding toward them. As the aliens loped down the rocky terrain, Cam noted with relief they weren't in the ice armor. Small mercies. They were totally outnumbered. The APC was to the east of them, and the alien horde to the north.

Rosie screamed and ran off. It didn't matter, there was no cover up here. With no time to set up the blast cannon, they were stuck with just their rifles and her team was about to get swarmed.

Mack bumped her as he stood shoulder to shoulder. With concentrated fire they systematically took out the closest alien barreling towards their position, the sound and fury echoing across the desert landscape. Cam noted that Burke and Garcia managed to take out one of the six aliens as they rushed the firing line.

The four remaining Ringheads closed to melee range. Cam's breath tightened, her heart ringing in her ears. This was going to be ugly.

The closet Hunter bull rushed them and barreled through O'Neill and Jonesy's position. Both men were thrown backward to the rocky ground. Jonesy's bald head slammed against a small boulder with a sickening crack. Neither man moved.

Cam shuffled backwards, sliding her feet over the rough terrain. A quick glance showed her rifle was nearing the end of its charge. She yelled over the crackling bursts from her gun. "Jeeves! We need air support!"

"Goddammit Jeeves! We're getting slaughtered here!" She dropped her empty rifle and whipped out her service pistol. Be like a fucking squirt gun.

Garcia and Burke were down. A dark stain was soaking into the dirt around Burke's head. Wailing fear bubbled up from her gut, threatening to burst from within her and consume her.

Mack moved forward, blocking two of the aliens from getting to Cam. She managed to bring her pistol to bear and managed a lucky shot into an eye, driving it back, but the second one lifted Mack's lanky frame and threw him into the encroaching darkness.

One of the Hunters leaped at Cam, landing nearly on top of her. She stumbled back on her ass, kicking and scrambling to avoid its clawing hands. She saw Jonesy's body in the distance, ducked, and ran under the Hunter's legs, diving for Jonesy's modded rifle.

Everything began to move in slow motion as she caught hold of the grip of the rifle. She landed on her back looking up at four Hunters closing in on her from all directions. The bodies of her fallen teammates surrounded her, bodies broken and scattered. She braced the rifle and fired at the closest Ringhead, burning a smouldering hole through its neck. The alien dropped to its knees, howling in pain. The rifle was empty.