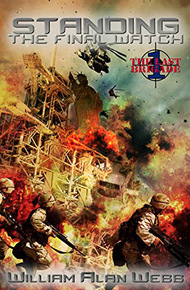 Bill wrote his first stories in grade school, and hasn't stopped since. A detour through the University of Memphis, where he majored in Creative Writing, taught him important things like verbs and nouns and punctuation.

By age 25 he'd read all of the classics…Robert E. Howard, Fritz Leiber, Robert Heinlein, Michael Moorcock and Roger Zelazny. Later influences include Larry Niven, Jerry Pournelle and Kevin J. Anderson. None are legally liable for anything he was written, though. After multiple careers in various industries, he much prefers writing books and stories to any sort of actual work.

Lt. General Nick Angriff has spent his adult life protecting family and country from a world of terrorism spinning out of control. On the battlefield, off the grid, in clandestine special task forces and outright black ops, Angriff never wavers from duty. But when a terror attack on Lake Tahoe kills his family, he's left with only the corrosive acid of revenge… that is, until a hated superior officer reveals the deepest of all secret operations. Against the day of national collapse, a heavily-armed military unit rests in cryogenic storage, to be awakened when needed, and Angriff is named its commander.

Fifty years later he wakes to find the USA destroyed and predatory warlords roaming the ruins. Stalked by assassins bent on seizing his command for their own purposes, Angriff has to prepare for war while avoiding murder.

Because the only wall still shielding survivors from slavery and death are the men and women of The Last Brigade.

Lake Tahoe sparkled under a high sun in a cloudless sky. From the warmth of the tour boat's passenger lounge, Mary Buffer giggled as her chubby husband Winslow braced against the bow railings and turned his face into the wind. They had not vacationed since Emily's birth three years ago, and Mary intended to enjoy every moment.

The red-haired toddler stood on tiptoes and waved at her father, then knocked on the window to get his attention. Her warm breath steamed the glass. Winslow grinned at her despite the cold spray and waved back.

Out of the chill and sipping hot chocolate from a foam cup, Mary watched Winslow acting like a little boy and her giggle turned into a laugh. He often painted with words his fantasy of cutting the clear waters of the Caribbean, wind blowing his sparse hair, as he stood at the helm of his own sailing ship. He even confided that those daydreams cycled in an endless loop in his mind. She hoped so; starting a practice as a new CPA required long hours and hard sacrifices, and he deserved time to dream and play.

The muffled buzz of a speedboat grew louder as it neared. Mary glanced left, but milling people blocked her view as the smaller boat throttled down near the port bow. She looked back at Winslow in time to see something metal hit the deck and bounce, stopping near his feet. The egg-shaped object seemed familiar, but her mind did not recognize it before the blast of the grenade ripped him apart.

His right arm smacked into the lounge window and left a bloody smear as it slid to the deck. His right shoe, and most of the foot and shin, remained upright on the deck. The rest of Winslow Buffer swirled astern.

Inside the large cabin Mary Buffer watched her husband's arm slide from view. Stunned, she dropped the foam cup and covered her mouth for almost two seconds before she screamed and grabbed Emily. Panic flooded her with adrenaline and the instincts of motherhood took over. Getting away from the horror on the bow drove her to claw and elbow through her fellow tourists, headed for the stern while dragging Emily behind her.

Another woman followed with a toddler under each arm, yelling for her husband, but panicky screams drowned her out. Mother and children fell when a large man shoved through, and they disappeared in the tangle of feet. Two men fought to shield their families from the stampede as everyone made for the starboard door. Mary stumbled, but a lithe middle-aged woman with blonde hair caught her left arm, and a girl who could only have been her daughter grabbed her right. Together they got Mary back to her feet. The two women exchanged a brief glance and Mary drew strength from the older woman's nod of confidence.

A moment later the crowd shoved Mary against a window, Emily behind her and the women on either side. Outside, the speedboat bobbed on the waves. Three of the four men jumped aboard the tour boat and fanned out. They wore black shoes, gloves, and three-hole balaclavas, and all carried machine pistols. One of the attackers locked eyes with her through the window. His were green, but she could see no humanity in them, no spark of empathy, nothing except cold indifference. He turned as a deck hand rounded the stern corner of the lounge and hosed him with 9mm rounds that chewed his chest into a red slaw of bone and lung. As the crewman toppled over the side, the killer met Mary's eyes again. This time he smiled.

Mary screamed and his smile widened. Pinned against the glass with Emily, she could not move no matter how much she struggled.

Forward of the lounge, the pilothouse overlooked the entire boat from a height of ten feet. The port door opened and the ship's captain stepped out, aiming a large pistol in shaking hands. Mary's breath caught. The terrorists on board had their backs to him, but the fourth man, still on the speedboat, spotted the danger and sprayed the pilothouse doorway, grinding up both the captain and the door frame. She watched as shells ejected from the gun and bounced on the boat's deck in a shining stream of metal.

Mary tried to squirm away as the terrorists burst in through the nearest door. Several men without families dove over the starboard side. Stopping next to her, the smallest of the three black-clad killers pointed with his machine gun and another killer charged back outside. After clubbing and punching his way through hysterical women and children, the gunman emptied his magazine into the swimmers' backs.

The leader, short but exuding authority, stood next to Mary. He scanned the lounge and spotted Emily huddled behind her. He leaned over and tousled her hair. Emily's face reddened as she sobbed louder, gulping little breaths.

"What a pretty little girl," he said. "You should be very proud."

Mary could not speak. The man's accent strongly hinted of New England. She smelled something fragrant, shampoo, or maybe cologne. Deep creases in his face resembled knife scars and a large mole dominated his upper lip. She edged away, hoping he would not notice, but he pointed at her and shook his head.

"Everybody shut up and stand still!" he yelled.

He repeated it three times before the terrified tourists quieted, except for Emily, who kept crying. Mary whispered, "Don't cry, sweetheart, Mommy's here," and stroked her forehead. Sliding sideways, she interposed herself between Emily and the gunman and buried the toddler's face in her shoulder to hush her. At the first opportunity, she would run for the door and not stop; she would take her chances in the water. If she dove deep enough, maybe the bullets wouldn't hit her.

Two young mothers clutching babies fell to their knees, begging for mercy. The leader motioned them to their feet and patted the air as if reassuring them all would be fine. He scanned the terrified crowd and examined each face, as if selecting a steak for dinner, and stopped when he spotted the slim blonde hugging a twenty-ish version of herself, the same mother and daughter who'd kept Mary from falling moments before.

"Those two." He pointed with his gun again. "They're the ones. Take care of them first."

The biggest attacker grabbed the women by their arms and dragged them, kicking and biting, to the port side bulkhead, and jammed his machine pistol against the younger woman's temple. Mary watched them with horror and relief, assuming those two had been the target of the attack, but shame kept her from looking at them.

Following a burst of gunfire, the leader pointed his machine gun at her. Mary froze.

"Sorry, lady," he stage-whispered. "Allahu akbar," he said, much louder. It came out as 'Allayhu akbah.' He squeezed the trigger. Mary saw the flash, then nothing more.