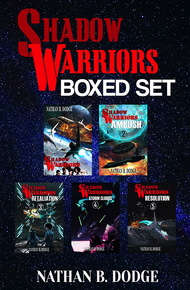 Educated in electrical engineering, Nathan Dodge worked as an engineer and engineering manager, primarily at Texas Instruments, before joining the University of Texas at Dallas as a teacher. He taught full-time for 16 years and continues to teach half-time.

He is married to Faye Lynn King, PhD, and he has three daughters, the youngest of which, Sharon, is also an author.

Nathan began writing seriously in 2012 and has attended nine Superstars Writing Seminars. He has published stories in One Horn to Rule Them All, Mike Resnick's Galaxy's Edge, and Eric Flint's Grantville Gazette. He is the author of the Shadow Warriors series, also from WordFire Press.

In his "spare" time, he loves weightlifting, hiking in Rocky Mountain National Park in Colorado, and solving crossword puzzles with wife.

Cal's father is a drunk. Letty's rich parents fight all the time. Tony lived on the streets with his mother until she died. Opi's stepmother wants her huge inheritance. Sasha's foster family is abusive.

Kidnapped by aliens, they must train as the crew of a galactic fighter to combat an enemy that threatens the entire Milky Way.

They hate each other, but if they don't train well, they will still be sent into battle to die!