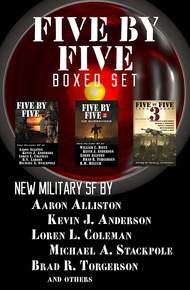 New York Times bestselling writer Aaron Allston is the author of more than twenty novels and numerous short stories. His works of science fiction, fantasy, and horror often emphasize action and humor. He has also authored Plotting: A Novelist's Workout Guide, a comprehensive textbook on the craft of plotting fiction, available from Amazon's Kindle Store, the Apple iBookStore, and Allston's sales page, www.archerrat.com. A lifelong Texan, Allston lives in the Austin area. Visit his web site at www.aaronallston.com.

Kevin J. Anderson has published 165 books, more than fifty of which have been national or international bestsellers. He has written numerous novels in the Star Wars, X-Files, and Dune universes, as well as a unique steampunk fantasy novel, Clockwork Angels, which is based on the new concept album by legendary rock group Rush. His original works include the Saga of Seven Suns series, the Terra Incognita fantasy trilogy, and his humorous horror series featuring Dan Shamble, Zombie PI. He has edited numerous anthologies, including the Five by Five series. Anderson and his wife Rebecca Moesta are the publishers of WordFire Press. Wordfirepress.com.

Action-packed short novels by the masters of military science fiction. FIVE BY FIVE showcases work by bestselling, award-winning authors. Novellas covering battlefields across the galaxy. It's a war out there!

In these pulse-pounding tales, the best (or worst) soldiers in the galaxy are pitted against powerful aliens on distant battlefields. Never before published stories about monsters, deadly combat tech, treachery, and honor. Stories of terrifying monsters, dangerous aliens and staggering cosmic dreadnaughts march alongside far-flung courtroom dramas and cautionary tales involving man and his devices.

His booted foot, as long as I am tall, came down on me, grinding me into the black earth. All the air went out of me.

My body held together, though. It was made of hardier stuff than human skin and bone. I didn't black out.

The giant's boot covered me from my neck to below my feet, but my head was exposed and I could look up at him. One standard-issue human male, mid-twenties, dressed in camouflage uniform and green-black body armor, glaring down at me, forest canopy over his head.

He had no rifle, but reached for his hip holster.

I knew what was coming. He'd raise his foot and, before I could pry myself from the soil, he'd shoot me. I'd be as dead as my co-conspirators intended me to be.

It was not the way I wanted to spend my day.

I probably ought to turn the calendar back to explain how me getting stepped on came about.

Picture a living room, sort of triangular. The longest section of sky-blue wall, decorated with imbedded lighting and flexmonitors showing images of Chiron's forests, oceans, and mountains, is slightly curved because the other side of it is the exterior of a three-story, old-style habitat dome. The other two walls meet at a right angle. There's white carpet on the floor, the expensive self-cleaning kind, and comfortable puffy furniture everywhere. That's where I was five weeks before I got stepped on.

For an hour I'd been watching another giant, his head as tall as my whole body, as he napped on his recliner. I sat on the chair arm and waited for him to wake up. I didn't think he was going to die that day, but you never know what a sudden start might do to someone so old, so I didn't wake him.

His name was Dr. Bowen Chiang—Doc to me and most people who knew him. At this point he was about two hundred years old, and looking it. His white hair was so sparse it was almost gone and his skin was thin and translucent. He was skinny like so many old humans. He always wore pajamas those days because he was wealthy and eccentric and retired. The ones he had on now were jade-green silk.

I looked like him, too. Not the way he was then, but the way he'd been when he was thirty, when he first left on his emigration to Chiron. I had the tint to my skin and slant to my eyes that used to say "Chinese" to people who worried about that sort of thing, and my hair was thick and black, worn short. Of average height and build for a 'ganger male, I was, by human standards, handsome, with a face that Doc said belonged on the young bad-guy lieutenant in a martial-arts immersive. Doc told me these looks had served him well when he'd lived in a place called Singapore, designing house-cleaning robots and chasing women, before he got married.

You've probably never heard of Doc Chiang by that name, but you know him by another. When Chiron was finally terraformed, opening for colonists, he was on the first colony ship headed this way from Earth. His passage came at a reduced rate because he served as a programmer and systems maintenance engineer during the transit. And during those twenty long years, he never went into coldsleep.

Instead, he invented. By the time they made orbit above Chiron, he'd developed the first-generation Dollgangers.

There's been a lot of misinformation circulated about 'gangers. Let me set matters straight.

Start with a human-like skeleton made of sturdy metal composites. It stands anywhere from 175 to 250 mm tall. (I'm 225 mm, about average for an adult male.) Inside the skull, bones, and ribcage is machinery—a computer system, a plant producing nanite crawlers that diagnose and repair damage, reservoirs of materials for the nanites to use, communications gear ranging from broadband radio to microwave transmitters to laser, extensible microwires for direct data upload/download, voice synthesizer, sensors where the corresponding human organs would be, battery arrays…

Over all that is a musculature of hard-wearing memory polymers attached at innumerable points to the skeleton, and over that a realistic-feeling skin laced with a sophisticated neural net allowing for sensations like pain and pleasure. Throughout the whole body runs a peristalsis-based circulatory system that sends the nanites wherever they need to go.

And that's only the start. The skin, the facial features, are shaped to individual appearances, making each of us distinctive. We get realistic hair that, supplied and reinforced by the nanites, can grow. Realistic human eyes and skin colors. Fingernails and toenails. Functional genitalia—'gangers are anatomically correct.

But what made us a financial success and first made Chiron a profit-generating world was Doc Chiang's last innovation before the suits took control of the technology. That innovation was the personality template.

Dollganger programming starts with an unbelievably complex personality system derived from a real human. It might be calculated from a lengthy series of tests or reconstructed from analyses of archival recordings and guesswork. Then, add learning capacity, abstract reasoning, subconscious motivations, complex emotions. The coding is so complex it has to be designed in large part by other machines, and it's so intricate that it can't be overridden just by introducing patches of new code.

Though we're individuals, we have a lot of personality traits in common—cheerfulness, helpfulness, obedience. At least when we're young.

So the success of the Dollgangers was because each little guy or gal could be made in the likeness of someone specific—of the buyer, of a famous performer, of a planet's most glamorous model, of an unobtainable object of desire, of a long-dead son or daughter. Oh, yeah, and because we cost a fortune and some people would mortgage their whole futures just to have one of us.

There was just about no task we weren't put to. Quality assurance on assembly lines making expensive components. Entertainments. Exploration, whether cave strata or new wormhole routes—put us in a miniature spacecraft with a Q-drive and no life support and we'd navigate wormholes too small for human ships and come back with star maps crucial to space exploitation corporations.

And then there was the sex trade. I don't know the name of the bastard genius who invented the "gang-bangers," or Dollganger remotes. They weren't really 'gangers. They looked like us, but they were just sensor platforms, mindless, linked wirelessly to full-immersion body suits and helmets worn by meat people. A human could put on one of those rigs and link up with a gang-banger. Then everything that the remote experienced was felt by its human operator. Gang-bangers did a lot of things, but mostly they had sex with 'gangers. You want a night with supermodel Sasu of Earth or Derek Ayala, Sexiest Man on Arkon? Well, you couldn't get the real ones, but you could rent a gang-banger and some time with the 'ganger replica of one of those celebrities.

Which was fine in the early days. We were made to serve, to please. And we couldn't say no anyway. We were property. But over the years, the fact that all the emotional fulfillment was in one direction only began to make a difference.

And that's what the meat people never really grasped. Technically, yes, we were robots. But the War of Independence didn't come about because we were infected with bad code, as governments and news media always imply. It came about because we're living, feeling creatures.

Anyway, Doc. That's what Doc invented. He was the Dollmaker of Chiron, and it's by that nickname most everybody remembers him.

Finally Doc's breathing changed. His eyes opened. He glanced over at me and smiled. He fumbled for his wire-rimmed glasses and put them on. "Bow. It's good to see you up and around." Unlike mine, his voice still carried traces of a Cantonese accent; he'd learned English and other languages well after reaching adolescence.

I cranked my volume levels so he could hear me speak. "Yeah, about that. My system clock and my mental processes clock are offset by nearly twelve hours. There's a big gap between my last memory and when I woke up in my charger-bed. Something happened to me."

He nodded, the movement languid. "What do you remember?"

"The Rockrunner shuttle. The heat shields."