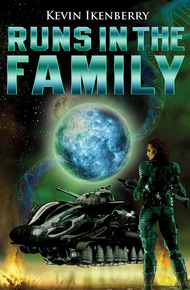 Kevin's head has been in the clouds since he was old enough to read. Ask him and he'll tell you that he still wants to be an astronaut. A retired Army officer, Kevin has a diverse background in space and space science education. A former manager of the world-renowned U.S. Space Camp program in Huntsville, Alabama and a former executive of two Challenger Learning Centers, Kevin works withspace every day and lives in Colorado with his family.

Kevin's bestselling debut science fiction novel,Sleeper Protocol, was releasedby Red Adept Publishing in January 2016 and was a Finalist for the 2017 Colorado Book Award. Publisher's Weekly called it "an emotionally powerful debut." His military science fiction novelRuns In The Familywas releasedby Strigidae Publishing in January 2016 and re-released by Theogony books in 2018. Peacemaker, Book 6 of the Revelations Cycle, was released in 2017, spawning its own line of books in the Four Horsemen Universe.

Kevin is an Active Member of the Science Fiction Writers of America and he is member ofPikes Peak Writersand theRocky Mountain Fiction Writers. He is an alumna of theSuperstars Writing Seminar.

Runs in the Family by Kevin Ikenberry

An outcast of the Eden Academy, physically unfit for military duty and lacking a civil service assignment, Mairin Shields is going nowhere fast. With little hope of leaving the outer rim of the Milky Way, Mairin agrees to participate in a classified experiment offering her genetic perfection and a chance to see the galaxy.

Now, armed with her great-grandfather's military knowledge and combat-refined instincts, Mairin is tasked with leading inexperienced troops in a war against a shadowy enemy using hauntingly familiar tactics. But the first rule of the military is "Hurry Up and Wait," and Mairin learns this firsthand.

Without transport to the fight, Mairin spends the downtime on a lush paradise world, getting to know her new body, her imprint, and her heart. Mairin meets Tallenaara, a beautiful Styrahi architect whose mission and past will come to challenge them both. Faced with the most difficult choice of her young life, Mairin Shields can only watch as her world spins out of control.

As the drop bay fell through twenty thousand feet above ground level, carbon impregnated parachutes deployed and pulled each of the six magtanks from their racks. With repulsors switched on and in the landing configuration, the vehicles would essentially glide to the planet's surface and come to rest at their mission programmed altitude of four feet. The magtanks would then drop into combat configurations and be ready for tactical movement.

Mairin opened the commander's hatch at ten thousand feet as the one hundred fifty-ton tank fell towards Wolc. Mairin didn't like the terrain. Too much rainforest. Too dense. Not enough open space for maneuver. "Conner, we got solid comms with everyone?"

"Get me Bullet Six."

"You're not gonna like it, ma'am." Conner shrugged and plugged the command frequency into her helmet.

"— is Bullet Six. Who authorized that drop?"

Ten seconds of silence. "Saber Six," he screeched, "take up a position as the battalion reserve. Maintain radio silence. Stay put. Is that clear?"

Mairin looked at the grid coordinates fed into her system. The reserve position now some thirty kilometers behind the advancing force. Stagnant. "Understood, Saber Six out."

She chinned the frequency for her vehicles, "Okay people, you heard those orders. We're soldiers and supposed to follow orders. Those are the rules. Well, I'm not gonna sit us where we can't do some good. We'll sit down, run a pre-combat check and move out. I'll send you a plan when we hit the dirt. Six out."

The tactical situation favored the Greys. Coffey had moved the regiment into a wide valley and pressed downhill toward a communications node. Most likely, a heavily defended communications node. The only real avenue of approach into the site was the valley Coffey now advanced his one hundred magtanks into side-by-side, like a parade formation. Mairin looked at the terrain surrounding the objective. They'll have guns up there on the high ground, and if they've got any type of indirect fire, the regiment will be hammered well outside of their engagement range.

Crest the ridgeline to the east, maneuver up the military crest on the backside of the hill. Screen the force and attempt to get to the eastern edge of the objective before Coffey does. It's the only thing that can save them. But what about us? A flight of exocraft streaked the atmosphere above her. We've got to be on our guard. Guard. Holy shit! "Conner, punch up the GUARD frequency."

"The GUARD frequency. All aircraft monitor it. We might be able to get some help that way."

Conner worked the computers for a moment. "Located it. Are you sure about this? It's UHF!" His dumbfounded voice made Mairin chuckle.

"Do it," Mairin said. How are we gonna do this? Mairin drew symbols from memory not her own, and it took her a minute to understand them as she made them. Just like scratching out football plays in the dirt. Whatever, Grandpa. We're here, and the regiment is here. What the hell are they doing? She punched the send button, transmitting the situation to her vehicles. "We got the intel yet?"

"On your screen now," Conner replied.

Mairin studied for a moment. The screen would work. She transmitted the graphics to her vehicles and keyed her radio. "Guidons, Saber Six. You've got the ground situation. We're going to screen the regiment to the east. We're going to have to haul ass. As soon as we're in repulsor range, engage at gear five and push hard. One has the lead, wedge formation. How copy?"

They checked in, Ulson with a loud "Roger that!"

Mairin allowed herself a smile. She chinned over to the GUARD frequency. "Ticonderoga, Saber Six. Flash traffic for Thunder Six."

She saw Conner work the frequency into the radio and she chinned to the frequency five seconds later. She heard, "Saber Six, GUARD is for aircraft emergencies only, not tactical vehicles. What can I do for you?"

Mairin frowned. "Thunder Six, roger. I have no support from TDF forces. Apologize for GUARD. Break." She unkeyed the microphone for a moment and then squeezed it again. "Relaying a SITREP to you now." She pushed the transmit button and her situation report went out. "I need full intel on the tactical situation. I do not have access to the Oscar and India net." The operations and intelligence network was reserved for conversations about the current situation only. Without information from the prescribed TDF network, she was essentially blind. Not to mention being all alone.

"Saber Six, you are not where your commander said you would be. Is there something you want to tell me?"

"Saber Six, Thunder Six. Roger, all. Be advised the admiral concurs. We have no contact with Bullet Six. Got your SITREP. Intel download coming in sixty seconds. I've got a squadron of exos I'll give to you for close air. Frequency inbound now. Good hunting. Thunder Six out."