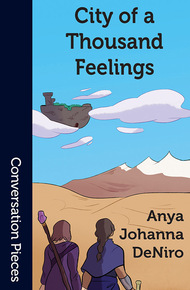 Anya Johanna DeNiro was born in Erie, Pennsylvania. She received a BA in English from the College of Wooster and an MFA in Creative Writing from the University of Virginia. She's also a 1998 graduate of the Clarion Workshop. Her short fiction has appeared widely, in venues such as Asimov's, Strange Horizons, One Story, Interfictions, Catapult, and Shimmer. She's the author of two collection of short stories, both published by Small Beer Press, Skinny Dipping in the Lake of the Dead (2006) and Tyrannia (2013); and a novel, Total Oblivion, More or Less (2009) (as Alan DeNiro). She's also been shortlisted for the O. Henry Award, and a finalist for the Crawford Award and Theodore Sturgeon Award.

City of a Thousand Feelings by Anya Johanna DeNiro

The City doesn't let certain people inside its walls. It's a place where emotions can become visible, but it flees the approach of a makeshift army who want to enter. Two of the trans women in this army forge a deep, complicated, and at times contentious friendship spanning thirty years. They must deal with not only the City's literal and figurative gatekeeping, but also other, even more sinister forces that use necromancy against them. As the narrator and her friend's lives are sundered apart, they must come to terms with what it means to not have a home, and what it means to be queer and aching for such a home. A sword and sorcery tale with emotional resonance, City of a Thousand Feelings brims with both the visceral and the allegorical, allowing the two trans women at the center of the story to claim their own space.

When I first meet you, your eyes are gray and hazel, and your name is Melody.

We hope the city will remain in place as we approach it, but no sooner after discovering it on the plain of salt, where nothing grows, it begins to recede from us. The city is in flight from us, because those who control the city believe we don't deserve it. They don't see us as who we are — as women — but rather as aberrations.

There are thousands of us — some banished from the city, some having never lived there in the first place, but rather forced to survive or starve on the plain, which is known by all of us as The Gather. Other groups that have lived and died on the plain have other names for it. There is no single geography when you live outside the city. We have vowed to care for each other and die together if necessary.

We could, if a passing traveler squinted from a fair distance, be called an army.

I'm terrified as we pursue our long-desired quarry, and yet I'm fiercely determined to see this through. Also, like most of us, I have nowhere else to go. We march hard for three days, pikes slung across our backs and gleaming schiavones at our scabbards, trying to gain ground. Our mounted scouts on the oracle horses know that the city will not be able to travel far, but still, everyone is nervous.

The flight is not pleasant on the city's inhabitants, either. For some who live within its walls, more or less placidly, their neighborhoods of steady feelings become jostled out of place, and they go into excessive mourning when there's supposed to be joy, or vice-versa. You wonder aloud to me, as we march side by side, why the city would make its own inhabitants suffer rather than allow us entry, when we want nothing more than to be left in peace in a little neighborhood of our own.

I say: "They would rather themselves all die than let us live the way we want to."

"But that is no way to live," you say, turning your head away from me. I say nothing, though my heart aches. You are still young, though like all of us, you bear many scars. The circumstances of our meeting were entirely mundane — we had been marching beside each other and fell into the same cadence. For a long time we didn't say much to each other. I think we were trying to suss out each other's silences. Our silences are so different — I hunch over slightly, and if I didn't happen to be holding a pike longer than the length of my body, I'm certain I would have my arms crossed. You, on the other hand, have plenty of feelings battling inside your interior, but nevertheless your movements are almost carefree, and you don't try to deflect anything or anyone. You always carry a slight smile, even if it's not directed towards the person standing in front of you.

And after our steps began to match, neither of us would ever be the same.