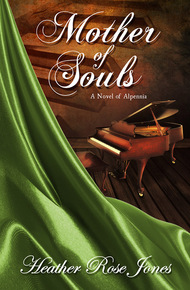 Heather Rose Jones is the author of the Alpennia historic fantasy series: an alternate-Regency-era Ruritanian adventure revolving around women's lives woven through with magic, alchemy, and intrigue. Her short fiction has appeared in The Chronicles of the Holy Grail, Sword and Sorceress, Lace and Blade, and at Podcastle.org. Heather blogs about research into lesbian-relevant motifs in history and literature at the Lesbian Historic Motif Project and has a podcast covering the field of lesbian historical fiction which has expanded into publishing audio fiction. A columnist at The Guardian called The Lesbian Historic Motif Podcast "among three of the best lesbian podcasts." Heather aspires to writing f/f historical romance all across the scope of European history. Her day-job involves failure analysis for a major pharmaceutical company, and whatever time is left over is spent gardening.

All her life, Serafina Talarico has searched in vain for a place where she and her mystical talents belong. She never found it in Rome—the city of her birth—where her family's Ethiopian origins marked them as immigrants. After traveling halfway across Europe to study with Alpennia's Royal Thaumaturgist, her hopes of finding a home among Margerit Sovitre's circle of scholars are dashed, for Serafina can perceive, but not evoke, the mystical forces of the Mysteries of the Saints and even Margerit can't awaken her talents.

When Serafina takes lodgings with Luzie Valorin, widowed music teacher and aspiring composer, both their lives are changed forever. Luzie's music holds a power to rival the Mysteries, and Serafina alone has the vision to guide her talents. For sorcery threatens the fate of Alpennia—indeed of all of Europe—locking the mountains in a malevolent storm meant to change the course of history. Alpennia's mystic protections are under attack, and the key to survival may lie in the unlikeliest of places: Luzie's ambition to write an opera on the life of the medieval philosopher Tanfrit.

She was tired. With her things unpacked and put away, Serafina thought briefly of going down to the parlor where she could hear the strains of the fortepiano as Maisetra Valorin played, seemingly for her own enjoyment. But the bed called more strongly and it was a pleasant enough lullaby to sleep to.

Who was the composer? She could put names to some sacred music, but the rest she'd learned only in scraps. There—that was a piece Jeanne had played for them during the summer. Beethoven, she had said carelessly, assuming everyone would know. Now a more lively tune, one that Costanza had played for her once in a quiet moment, but she didn't recall who she'd said had written it.

Sleep had nearly claimed her when the music changed. No, not only the music. The walls themselves were vibrating. There was a glow like moonlight, except that moonlight didn't curl across the floor like mist, like swirling water. She could still hear the tinkling of the keys, but it flowed through her blood. In wonder, she rose and drew on her dressing gown to creep down the stairs toward the source of that music.

She stepped quietly so as not to disturb the player. Had Jeanne known? Was this one of her little jokes? There had been none of her arch humor in the suggestion of Maisetra Valorin's place. And Jeanne wasn't sensitive to this sort of working. A music teacher, she'd said, as if the woman were nothing more. But surely a talent such as this would be common knowledge?

Serafina paused in the doorway, enough in shadow so as not to attract attention. In the glow of the lamps, Maisetra Valorin sat bent over her keyboard in the same dark gray dress she had worn earlier. The room held nothing but her and the music. The lines of worry that had marked her face earlier were smoothed away and softened. Something in her expression struck Serafina like a blow. The woman didn't know. It was like the way you recognized a man was blind when you saw that he was tracking sound, not movement. Maisetra Valorin was hearing only the music itself.

The outlines of the parlor blurred in Serafina's vision and she let out a sigh that was close to a sob. With a startled exclamation, the tune stopped. Earthly sights and sounds alike faded, but the currents that underlay them still swirled around her, slowly dissipating even as she dashed the tears from her eyes.

"I'm sorry, Maisetra Talarico. Did I disturb you?" Maisetra Valorin rose from the bench before the keyboard. "What's wrong?"

Serafina shook her head. How could she explain her sudden jealousy? "It's only that the music was so beautiful," she said. And that was no lie.