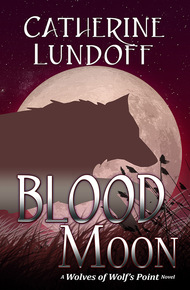 The Wolf's Point werewolf pack, born from the magic that calls small groups of middle-aged women to embrace their inner and outer wolves, has been protecting the town for generations. Now Becca Thornton and the Pack have their hands (and paws) full of all the trouble they can handle. Plus a bit extra. Pack member Erin Adams just found a dead body in the trunk of her car and confessed to murder. But no one's sure who the victim is and Erin can't remember what happened. Did Erin fall off the wagon and murder a former foe? She doesn't trust herself and Becca's beginning to have her doubts.

If that wasn't enough, Becca's ex-husband sold their old house and their new neighbors are clearly up to something. Can the Pack solve the mystery and clear Erin's name before the next full moon? Or do the town's new residents have other plans?

Erin Adams looked out at the mountains and tried not to think about what was in the trunk of her car. At least the mountains around Wolf's Point were still as beautiful as ever. She wondered if she'd ever get the chance to run through them again, feel the wind in her fur, the ground flying by under her paws. The Pack at her side.

That thought was enough to make her look back at her car. Erin rubbed her aching forehead with one hand and closed her eyes. This was, without question, the worst thing she'd ever done. Even if she couldn't remember doing it.

But maybe there was still time to call Shelly and get her help to figure a way out of this mess that she'd blundered into. That was what Pack Alphas did, or so Shelly kept reminding her. But that might make Shelly an accessory if they got caught. Or rather, when she got caught. Erin closed her eyes for an instant; lying was never a thing she'd been good at or wanted to get good at. Anyone she called would almost certainly go down with her.

That thought weighed her down like a rock. The Pack couldn't afford to be without its Alpha so soon after they got her back, not to mention what it would do to Pete and the kids. There was no way that she could drag Shelly into this.

Her thoughts turned to Becca, waded through a jumbled mess of emotions and came back with a single realization: they'd suspect her first. Becca was her friend, her housemate. Her...something they still hadn't defined, but which felt more like girlfriend every day. Her stomach did a slow, leisurely flip when she thought about that and she almost smiled. But this wasn't the time to think about Becca. She couldn't afford to be distracted, to be vulnerable. Not now.

Maybe there was another solution, a way to hide what had happened. But then what? She'd still know and she'd have to carry the burden of what she'd done, alone. And she knew where that road led. Falling off the wagon to cope with her guilt wasn't an option, either.

Besides, if she ditched the body out here and it was found, the regular wolves would certainly get blamed for it. The new governor was already pushing for a wolf hunting season and that would put things right over the edge. She didn't want that on her conscience either; the wild wolves were kin as much as they were cover for the Pack and important for the local ecology.

Erin ran her fingers through her short-cropped brown hair, wondering if there was anyone else she could turn to. But she couldn't think of any other Pack member who'd be able to do anything about this situation, not more than she could do herself, anyway. It certainly wasn't the sort of thing that her AA sponsor had signed up for, or any of her friends, for that matter. So she was on her own. There was nothing for it but to lie in the bed she'd made for herself.

She pulled her cell phone out of her pocket and selected a contact. "Hi. It's Erin. I've done something...I need...can you come up to Spruce Point? Yes, it's important. I want you to see it before Sheriff Henderson does."

She clicked the phone off and glanced toward the road. Nothing to do now but wait.