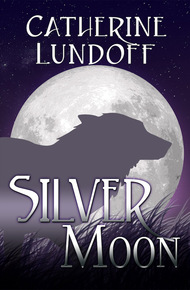 Becca Thornton, divorced, middle-aged and trying to embrace a quiet life, discovers that there are still plenty of surprises to be had when her menopause kicks in with bonus lycanthropy. And she's not the only one. The seemingly peaceful and dull town of Wolf's Point has its own all-female werewolf pack and Becca has just become its newest member. But it's not all protecting Wolf's Point, midnight meetings at the Women's Club and monthly runs through the woods. There are werewolf hunters in town and now they've got Becca and the Wolf's Point Pack in their sights.

As if that wasn't enough, Becca's cute lesbian werewolf neighbor, Erin, is starting to haunt her dreams as well as her doorstep. What's a newbie werewolf to do, between hot flashes, silver bullets and unexpected transformations? Can Becca overcome her fears and help the werewolves defeat their greatest enemy?

Before she knew it, it was the end of her day and there was Erin waiting outside, her long form leaning up against a lamppost like something out of a noir film. All she needed was a fedora and a smoke. Becca squirmed, fantasizing about ducking out the back door for a minute, but there were Pete and Shelly herding her out the front door.

"You gals have a nice evening," Pete winked at Erin.

Just like we were on a date or something! Becca bit the words back before they could cross her lips. No point in planting that particular seed where it didn't need to start growing. Those kinds of rumors could wreak some serious havoc on her nonexistent dating prospects. She bit back a snort and made herself smile up at Erin. "You didn't have to stop by to meet me, you know. I'm used to walking home alone in the evening."

Erin grinned back at her. "But tonight the moon's almost full and the mountains look even more gorgeous than usual. I thought you might want to take the long way home and check out the scenic route. I even brought tea." She held out a shiny little coffee mug and a small white paper bag. "And chocolate."

"You do think of everything." Becca helped herself to a small piece of the chocolate and gulped down the tea before handing the bag and the cup back. Erin turned away to tuck them back in her pack just as the moon caught Becca's eye.

She found herself staring up at it like she'd never seen it before. Had it always been so white, so compelling? It pulled at the tides in her blood, rustling under her skin until she was so jumpy she wanted to run and howl. She forced her tone to sound casual. "Let's walk then."

They moved briskly, Becca surprising herself by keeping up with Erin's long strides. There was a breeze blowing tonight, coming in from out of town somewhere. It was full of tantalizing scents, ones that Becca had never noticed before. The wind's fingers twisted their way through her shoulder-length gray and brown hair, lifting it out of the scrunchy that tried to restrain it until she gave up and yanked it off. She felt like anything might happen tonight. The thought thrummed through her like a drumbeat.

"Do you run?" Erin's voice growled from somewhere above her and she shivered as if she was shaking off an old skin. For an answer, she swung her bag back out of the way. Then she lunged forward into a lope that came easily to her. It wasn't too fast but it was certainly more of a run than she'd attempted in years. She tried not to think about how much her calves would hurt later.

Erin effortlessly kept pace with her as they charged from downtown onto the more deserted side streets, heading for the river. The bag banging against Becca's back was a minor irritation, one she could ignore in her newly discovered speed and stamina. She sucked in the wind like a drink and imagined for a moment that the two of them were chasing something, something they had to catch. Her white tennis shoes twinkled below her against the dark pavement as they surged out onto the bridge.

The river rapids thundered beneath its rusting metal trusses and Erin caught Becca's arm to slow her down and draw her to the rail. Together, they panted out into the moonlit dark in companionable silence. Becca grinned down at the water, its rushing length matching her mood. "Maybe this will be the year that I finally go on that whitewater trip Ed was always going on about."

"Sounds like a great idea." Erin said enthusiastically. And just like that, Becca knew who she wanted to go with. She'd been alone too long; it was time that she started making some new friends. She glanced sidelong at Erin, watching her nostrils flare in the breeze. The slight elongation of her face that Becca had seen earlier was back, as was the silver tint in her eyes.

But now it felt right, like it was the way she should look. She grinned back at Becca, and even the length and sharpness of her teeth seemed to suit her face better than they had back in town. "Thanks for running with me. I needed that."

"Rough day crunching the numbers?" Becca remembered that Erin was an accountant, but she always had problems reconciling it with what she'd seen of her neighbor. She looked like she should be herding cattle or something, lariat in hand.

"Always." Erin threw back her head, tilting her nose up at the moon. For a second, Becca wondered if she was going to howl at it. They both looked up, silent again for a moment.

Then Becca glanced down at the water and her hands on the railing. Had her fingers always been so long, the backs of her hands so dark, almost as if they were covered with...black fur?

"Have some more tea," Erin nudged her hard, as if determined to interrupt her thoughts, and thrust the thermos into Becca's hands.

When Becca looked at her fingers again a couple of seconds later, they looked normal. "So when you were going through menopause, did you think you were seeing a lot of crazy things, stuff you knew couldn't be happening?" She asked at last. She tried to make her tone casual, as if she was just making conversation.

"You kidding?" Erin laughed heartily. "I thought I was seeing Elvis down at the diner every time I had a hot flash!" She appeared to catch a bit of Becca's mood then and reached out to pat her shoulder reassuringly. "You'll be fine. It just takes a little adjustment."

Seeing Elvis wouldn't be so bad, Becca thought. It was the rest of it that was kind of disturbing.