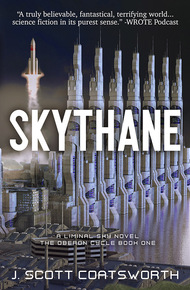 Scott lives with his husband Mark in a yellow bungalow in Sacramento. He was indoctrinated into fantasy and sci fi by his mother at the tender age of nine. He devoured her library, but as he grew up, he wondered where all the people like him were.

He decided that if there weren't queer characters in his favorite genres, he would remake them to his own ends.

A Rainbow Award winning author, he runs Queer Sci Fi, QueeRomance Ink, and Other Worlds Ink with Mark, sites that celebrate fiction reflecting queer reality, and is a full member of the Science Fiction and Fantasy Writers of America (SFWA).

Jameson Havercamp, a psych from a conservative religious colony, has come to Oberon—unique among the Common Worlds—in search of a rare substance called pith. He's guided through the wilds on his quest by Xander Kinnison, a handsome, cocky wing man with a troubled past.

Neither knows that Oberon is facing imminent destruction. Even as the world starts to fall apart around them, they have no idea what's coming—or the bond that will develop between them as they race to avert a cataclysm.

Together, they will journey to uncover the secrets of this strange and singular world, even as it takes them beyond the bounds of reality itself to discover what truly binds them together.

The rain hit the plas and ran downward in little rivulets, separating and rejoining like branches of time as the storm whipped itself into a frenzy over Oberon City.

Xander Kinnson lay on his bed, head thrown back, watching the tempest with a laziness that belied his inner turmoil and pain. Alix had left him and gone missing. A year had passed, and still he had a hard time accepting that simple fact.

His dark wings with their jet-black feathers were stretched out lazily to each side of his supine form, their tips extending past the edge of the bed. His chest heaved slowly up and down, and he breathed easily, as if he were utterly relaxed.

Nothing could have been further from the truth. Below the surface, under the deception of skin and sinew, his heart beat at a thunderous pace, and his mind raced for answers to Alix's fate that slipped beyond his grasp.

The handsome trick he'd brought home rested his warm hands on Xander's thighs, his hot mouth engaged elsewhere. Xander smelled the deep, masculine musk of him, slipping a hand absently through the man's dark, tousled hair as the rain increased to a thundering downpour against the plas. The drops glistened, each an individual universe of shimmering light before running quickly out of sight.

A flash of lightning illuminated the room, thunder indicating how close it had been. As the heavy rain pounded against the arco's walls, Xander rode the wave of pleasure higher and higher. Despite himself, he rose quickly toward climax, drawn up on the tide as the trick worked his cock. Unable to stop himself, he thrust his hips almost angrily upward into the man's willing throat. Closer, closer….

He reached the crest, a pleasure so intense it burned through him like phosphorus, a white-hot fire.

Lightning flared again across the wet, black sky, followed by thunder so close it shook the bed. The storm had reached a fever pitch outside, and he arched his back in the air one more time, his wings rustling beneath him. As if in concert with the storm, Xander came, the release of his orgasm radiating from his hips along his spinal cord and down through his toes and the tips of his wings. He held the man's head to hold him there while he exhausted himself.

The rush of elation washed away his cares for a few brief moments. Xander shuddered, shivered, and shuddered again, and it was over.

For a while, he drifted in an oblivion that was blessed in its emptiness. The rain fell in a steady beat against the window, and he forgot to wallow in his pain. His mind floated free, with no responsibilities, nothing to worry about for those brief moments between sex and real life. This was what he needed. This lack of thought, this pleasurable oblivion where he could just be.

When he opened his eyes at last, the nameless trick was staring down at him, expectant.

"I can do more, if you'd like," the man said with a grin. Like Alix, he had no wings—a lander man.

Xander glared at him, annoyed. He was handsome enough, tall, dark-haired, with blue eyes and a light complexion. Strangely, he reminded Xander of Alix. The hair and eyes were wrong, but there was something about him, and that annoyed the hell out of Xander, for reasons he didn't care to examine too closely. "Get out," he said with a dismissive wave.

The man frowned. "I thought—"

"Oh right, your pay." Xander took the man's arm and slitted him a hundred crits from the wrist reader embedded in his own. Then he waved the trick away. "We're square. Now get the fuck out of my flat."

The man gathered his own clothes, but Xander didn't give him time to put them on. Instead he hustled the trick out of the irising door, palming it closed on his hurt and angry expression.

I really have become a bastard, he thought, staring at his dim reflection in the shiny black door. It had been a long year.

He tapped the cirq in his temple with his left hand, and called out to his PA. "Ravi, any messages for me?"

Ravi's smooth voice spoke in his head. "Just one, from OberCorp. A reminder to meet the psych who's coming in from off-world at Immigration tomorrow morning."

Xander pulled off his boots, leaving himself naked, and strolled over to the window to look at the storm. "What's his name again?"

"Image?" He closed his eyes and saw the man's face in his mind's eye. The man had to be in his midtwenties, close to his own age, with a shock of tight-cropped red hair, brown eyes, and light freckles across the bridge of his nose. He had that kind of schoolboy sexiness that appealed to Xander, looking very much like a younger version of Alix.

Quince had set him up to play tour guide to earn extra cash—one of OberCorp's side jobs.

He was cute enough—slender, not effeminate, exactly, more… refined. Just Xander's type, like Alix. But Havercamp seemed a little conservative for Xander's taste, dressed in a tailored suit and one of those rigid white Beta Tau collars. No matter. A few days in this hellhole would loosen him up.

The raindrops increased, the storm once again picking up steam. It was the strongest tempest Xander remembered seeing in years, and the winds shook the sturdy walls of the arco enough to make him worried. Hopefully the worst of it would have passed before he had to leave to pick up his guest.

"What am I supposed to do with him?"

"He's here to find out why pith production has dropped off. You're to ferry him out to these coordinates." Ravi's voice had just the slightest hint of disapproval, an I already told you this tone. A map appeared, with a point in the Pyramus Mountains flashing blue, along with a contract.

Xander ignored the attitude. After all, Ravi was just gridcode.

OberCorp had hired him for off-the-grid jobs like this before. It was a clean one-shot contract. He'd have to thank Quince later.

Xander had spent a fair amount of time in the wilds outside Oberon City with Alix, in the vast inland forest that was mostly uninhabited and little explored.

Alix. The man who had pulled Xander out of the gutters of the Slander, and had shown him that he was more than just a trick or rent boy. That he could be more. He'd shown Xander that someone could love him.

His one-time lover had vanished into the Outland a year earlier while on a hunting expedition with friends. Xander had been concerned when he hadn't come back after a few days, and later he'd panicked when Alix failed to return altogether. He'd been out of range of Oberon's grid—too close to the Split, where electronics often failed. Xander had gone out to look for him, spending two weeks on his trail, to no avail.

Xander sank down on his couch, his wings fluttering behind him anxiously. He waved his hand across the tri-dee, activating the screen in the wide table. "Ravi, playback, please. Alix, Deca 7."

Soon the projection of Alix's body appeared above the tri-dee, rendered in almost lifelike precision. Only the slightly see-through quality of the image betrayed it as a holo-vid. Alix's long red hair was swept behind his ears, and his brown eyes seemed to look directly at him, more perfect than he had ever been in real life.

How many times had he watched this? He'd lost count.

"Hi, Xander. We're out here in the Pyramus Mountains." He grinned, showing off his beautiful smile. Static shot through the image. Alix had been on the edge of the e-zone, where electronic transmission was barely possible. "Tomorrow we're heading up into the mountains and…." He turned to look over his shoulder. "What?"

Xander knew every word by heart—he'd watched this a thousand times. He mouthed the words as Alix spoke them. "Dani says she's got dinner ready. It's amazing here, Xan. One of these days I'll take you out this far. Gotta run… love you." Alix blew Xander a kiss, and then reached forward to shut off the video.

Xander got up off the couch and paced back and forth, nervous energy fueling him. He held back a barely pent-up rage. Why did you leave me? he wondered. A year had passed in waiting.

No more. Xander was done with this obsession.

This trip was just the thing he needed to take his mind off Alix, to put the whole sad thing behind him. I can't wait for you forever.

He grabbed a carry sack and filled it with the things he'd need on the road. He'd be meeting the psych the next day, and would bring Havercamp to his storage unit to pick up a few more things. Then he would haul the man out toward the Split. It would be good to get away from everything here that reminded him of Alix.

He finished packing, too tired to even think anymore. He dropped down onto his bed, exhausted. He closed his eyes, but sleep refused to come, and he tossed and turned for another hour.

At last he sat up, frustrated, and ordered a sleeper from Ravi. It dropped out of the replicator slot, and he slapped the patch onto his wrist and lay back down, waiting for the drug to take effect. He needed to be fresh tomorrow.

It coursed into his system through his skin, and he fell almost immediately into a dark and dreamless sleep as the rain continued to fall unabated outside.