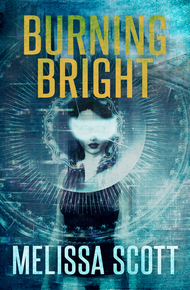 Over the next thirty-eight years, she published more than thirty original novels and a handful of short stories, most with queer themes and characters, as well as authorized tie-in work for Star Trek: DS9, Star Trek: Voyager, Stargate SG-1, Stargate Atlantis, Star Wars Rebels, and Rooster Teeth's anime series gen:LOCK. Lately, she has collaborated with Jo Graham on the Order of the Air, a series of occult adventure novels set in the 1930s (Lost Things, Steel Blues, Silver Bullet, Wind Raker, and Oath Bound) and with Amy Griswold on a pair of gay Victorian fantasies with murder, Death By Silver and A Death at the Dionysus Club. She has also continued the acclaimed Points series, fantasy mysteries set in the imaginary city of Astreiant, most recently with Point of Sighs. Her latest short story, "Sirens," appeared in the collection Retellings of the Inland Seas, and her text-based game for Choice of Games, A Player's Heart, came out in 2019. Her most recent solo novel, Water Horse, is just out from Candlemark & Gleam.

When space pilot and ambitious young game developer Quinn Lioe gets shore leave on the free-port planet of Burning Bright, a nexus of trade balanced between the human and Hsai empires in space and the center of virtual reality gaming for all of civilization, Lioe isdetermined to play the game at its brilliant center. The deeper she dives into the game, the more shebecomes enmeshed in the conflict between two great empires, and a key figure upon whom the fates of both cultures turn.

Clouds flashed past beneath them, thin wisps that only partly obscured the glittering water. Burning Bright was mostly water; the main—the only—landmass was largely artificial, the new land built on the inner edges of the giant atoll's inner islands, guarded from floods by a massive network of dikes and storm barriers. The city of Burning Bright—city and planet shared a name; the two were effectively identical—was one of the great engineering achievements of the nonaligned worlds: even in the Republic, and even in Foster Service schools, Lioe thought, you learn that mantra. And it was pretty much true. In all the time she'd spent in space, piloting ships between the Republic and the nonaligned worlds and Hsaioi-An, she's never been anyplace that was at all like Burning Bright.

"Can I get you anything?"

Lioe looked up to find the shuttle's steward looking down at her, balancing easily against the movement of the orbiter, one hand resting on the back of the empty couch beside her. She shook her head, but smiled. "I can't think of anything, thanks."

The steward nodded, but didn't move. "I couldn't help noticing your pins."

Lioe let her smile widen, grateful she hadn't had to set up this encounter herself. "I saw yours, too." She glanced again at the pair of Game pins clipped just below the company icon: one was the triangle-and-galaxy of the Old Network, but the other was unfamiliar. "Local club?" she asked and was not surprised when the steward shook his head.

"Actually, it's a session souvenir," he said. "It was a Court Life variant run by Ambidexter about five years ago."

"I think I saw tapes of that," Lioe said, impressed in spite of herself. The steward didn't look old enough to have been playing at that level five years ago. "That was the one that featured Gallio Hazard and Desir of Harmsway, right? The one that really made Harmsway a Grand Type."

"That's right." The steward glanced quickly around the cabin, then lowered himself into the couch next to her. "I'm Vere—Audovero Caminesi."

"Quinn Lioe." They touched hands, awkward because of her safety harness.

"You wouldn't be the Lioe who wrote the Frederick's Glory scenario," Vere said.

Vere grinned. "That was a great session. There's been a lot of talk on the net about it, I'm still trying to find someone at the club who'll run it. Are you going to be doing any Gaming while you're here?"

The conversation was going just the way she'd hoped it would. Lioe said, "I was hoping too. I don't know the clubs, though."

Vere spread his hands. "I can give you some names, if you'd like."

"There are really only three clubs that are worth your while," Vere said, lowering his voice until she could just hear him over the noise of the engines. "Bili's in the Old City, Shadows under the Old Dike in Dock Road District, and the Two-Dragon House in Mainwardens'." He grinned suddenly. "I think Shadows is the best of the lot—it's where I play, so take it for what it's worth."

"They're all about the same, really," Vere answered. A chime sounded from further forward in the compartment, and he lifted his head to look over the seatbacks for the source. Lioe followed the direction of his gaze, and saw a call light flashing above one of the seats. Vere grimaced, and pushed himself to his feet, but leaned down to finish what he'd been saying. "Shadows has newer machines, but they're not state-of-the-art. Billi's was that maybe four, five years ago. Two-Dragon is pretty standard stuff, a little older than Shadows."

"Thanks," Lioe said, and Vere smiled down at her.

"Don't forget me if you run an open session."

"I'll keep you in mind," Lioe said, and meant it. She would be needing good players, if he managed to persuade a club to let her lead sessions, and anyone who could play for Ambidexter was good enough for her. It was just a pity Ambidexter himself was no longer in the Game.