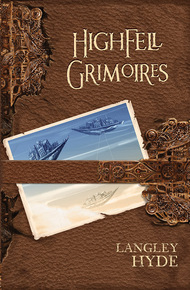 Langley Hyde's debut steampunk novel,Highfell Grimoires,was named a Best Book of 2014 in SF/Fantasy/Horror by Publishers Weekly. Her short fiction has appeared inEscape Pod, PodCastle, Terraformand more. She has lived in Britain, Germany, Canada, and around the U.S. but currently resides in the Pacific Northwest. She is an MFA candidate at Western Washington University.

Born to privilege, gifted in languages and spells, Neil Franklin has planned his brilliant future—from academic accolades to a proper marriage—and is intent upon upholding his family name and honor. The sudden death of his parents shatters all of that, leaving Neil and his younger sister beggared and orphaned.

When Neil's estranged uncle offers him a bargain that will save him and his sister from debtor's prison or exile, Neil eagerly agrees. Handing over the family grimoire as collateral for their debt, Neil devotes himself to working as a teacher for wayward youths at a charity school high in the clouds.

But Highfell Hall is not the charity Neil imagines it to be and the young men there aren't training for the dull lives of city clerks. Amidst the roaring engines and within the icy stone halls, machinations and curious devices are at work. And one man, the rough and enigmatic Leofa, holds the key to the desire that Neil has fled from all his life and a magic as dangerous as treason.

When it came time for me to say goodbye, I clasped my sister's gloved hands in mine. I wanted to say too much. I wanted to speak a spell that would give Nora the strength she would need to make the best of this bad situation. But choked by emotion, I said nothing. No such spell existed. I could only wish for her safety and hope for her happiness. And neither wishes nor hopes were magic.

We stood together at the edge of the airfield. The summery golden grass crackled under our feet, smelling sweetly of hay.

Nora wore mourning silks and a narrow bonnet that protected her face from the afternoon sunshine. Although she was more delicate than I was, we both shared our mother's golden skin and small build.

Yet where I had my wastrel father's russet curls, she'd inherited the darker hair of my stepfather. When her hair was straightened, it passed for aristocratic. Today, her skin was sallow with grief and her doe-dark eyes were marked with the mauve crescents of sleeplessness.

"When will you be back?" Nora asked. "I'll see you soon." I hoped I wasn't lying. "You're an ass, Neil. You'd best write, or I'll have to hijack a glider and hunt you down." She embraced me fiercely. Her orange water per- fume didn't hide the faint singed scent of her ironed-straight hair. She smelled so like our mother that I couldn't breathe for grief.

I didn't want to let her go. I wanted to protect her, but instead I told myself Nora could take care of herself and I gave her a respectful nod before I turned to our uncle.

Gerard Franklin was a tall man, gaunt with stress, but still dig- nified even in his mourning black. During my childhood, on the few visits he'd ever made to our family home out in Midshire, I'd disliked him for no reason I'd ever been able to articulate. Now he made an un- likely savior. Without his intervention, I would have been transported halfway across the globe to Newland.

"I'm grateful for the opportunity to teach in your school. I know you can't pay me much, but this is a right and honorable living you've given me," I told him warmly as I shook his hand.

Uncle Gerard smiled modestly, an expression that sat thinly on his aquiline features. "Remember what I've told you about your pu- pils. Your duty is to better them. Although our methods may seem somewhat harsh, the stubborn ox listens only to the whip. If you can tame them and teach them the rewards of work, then you will have done well."

"I understand, Uncle." I smiled at him. I doubted the students would be so unfortunate as that. I knew that life treated some harshly. But I was sure, between myself and the other teachers at the institu- tion, we would manage to create a curriculum that would get the boys excited about their letters. Whatever their backgrounds, I hoped to show them the joy that could be found in learning.

Goodbyes over, Uncle Gerard and Nora walked me across the airfield in silence. My sister kept her posture rigid yet graceful, while my uncle's gestures quickened, rough with impatience. We reached the glider as the airman finished snapping the launching lead to the craft's nose. My uncle's coachman finished loading my trunks behind the leather seats in the open cockpit.

The time for me to leave had arrived too soon.

I gazed at the distant city. Small brick buildings cobbled the hori- zon, dwarfed by the scores of anchored aetheric vessels that floated in the air above Southside and the River Wyrd. At this distance, the stately towers built upon their ship-like hulls looked small, high as they were above the city smog.

I had attended boarding school on an aetherium, and now I would return as a teacher. I'd never expected this.

I climbed aboard the glider and swung into the second seat. The sun-heated leather, the beeswaxed silk wings, these familiar smells filled me with a schoolboy's anticipation of the oncoming adventure. That overrode my regret at leaving the familiar behind. I snapped myself in and fitted the leather straps before the airman came to dou- ble-check me.

He gave a low whistle of appreciation.

"You've been a boarding boy, I can tell." The airman vaulted into the front and revved the engine. "Got your own parachute and all!"

"Yes, I attended Evermore and after that Elmstead." I buckled my top hat beneath my chin, removed the goggles from the brim, and fitted them onto my face. The tailored ostrich leather hugged me like a mask, even as the smoked glass in the goggles darkened the sky's blue from robin's egg to cobalt.

"Elmstead? Highest of the high! And now you're going to Highfell Hall... Suppose none of earn our fates." He signaled to the winch man with a wave of his hand.

The winch man cranked at the mechanized winch until its motor purred into life. The winch wound up the lead attached the glider's nose. The line hissed through the grass, grew taut, and reeled us for- ward. Then the wind caught beneath our wings and we swung up into the sky like a kite.

The lift-off pressed me into the padded seat and squeezed the air from my lungs. As wind roared past me, I wondered what he'd meant by that. But it was too late to ask. We were aloft.

I felt but the barest tug on the craft's nose as the lead grew taut. The pilot released the winching lead. It snapped loose, falling to earth. We shot free.

The city of Herrow stretched out beneath us. To the north of the murky river sprawled the city's Central Mile and the richer neighbor- hoods. I glimpsed Knave's Court District, where Nora would reside with our uncle in his townhouse. There the streets broadened, with the buildings made of brick or stone.

As we gained altitude, I could see how the streets sprung out spoke-like from old town centers. Villages had grown outwards and entangled themselves to create the labyrinth of the modern city.

The pilot angled our glider away from the Central Mile.

On the Southside, the aetheria shadowed the neighborhoods. The wood-and-tar tenements, locked in nearly perpetual twilight, formed a dense warren. Beyond the Southside, smokestacks belched out coal dust.

The airman piloted us upward, above Southside and toward the gravity-defying vessels called aetheria. Hanging in midair, the aetheria still filled me with awe. Powered by the invisible current of aether, the great floating ships' upper decks supported educational institutions, laboratories, and also the wealthiest peers' mansions. Although I had no iolite lens with which to see it, I knew that the natural aether gusted and rolled around us, scentless and intangible. The aetheric current running above the River Wyrd was among the most powerful in Higher Eidoland.

Like navy vessels on fleet review, the great ships pivoted in unison so that their prows faced into the airstream. The massive chains that anchored them to earth glittered with frost.

Gliders, their silky wings glimmering in the sunshine, scudded around the aetheria like skiffs. Insectile trackers, their metallic bodies the size of teakettles, buzzed through the air, delivering messages and small packages.

Steamy exhaust from the turbines gusted around us. It smelled hotly of metal, edged with an iron tang reminiscent of blood.

Positioned between the mooring chains of higher aetheria and caught sometimes in their shadows, the lesser institutions hovered. These were dingier, their gardens less extensive. Although I had often viewed them from above, never in my life had I thought I would step foot on one in any capacity. As we dropped into their midst, I felt de- termination as well as curiosity.

Finally, wind whipping and roaring around us, the pilot circled one aetherium in particular. Absurdly small, like a river trawler, the institution below us had a small brick house flanked by two adjoined halls. From above the buildings formed a letter "H". Whether it stood for Highfell or was merely an architectural accident, I could not say. I saw no garden and no one awaited us on deck.

The airman descended toward the aetherium's prow and landed the craft expertly, catching the arresting wire on the first go round and rattling to a stop across the landing deck.

Unsnapping myself only a second slower than the airman, I dis- embarked. The ice had mostly melted in the midsummer afternoon warmth. The footing wasn't treacherous. Since no servants had come to meet us, I helped the airman heave my trunk out from behind the leather passenger seat.

We carried the trunk across the landing deck and deposited it behind the windbreak. I tipped the airman a shilling. As I tucked my goggles and straps up onto my hat's brim, I saw my welcoming committee approach.

A rotund man, followed by his thin wife and two adult children came forward. The Nobbsnipes, I supposed. Apart from them, only two maidservants and one uniformed manservant stood at attention.

I had expected there to be more of a turnout. At the very least, I had hoped to be introduced to the other teachers. What a shame. In my school days, usually the teachers would assemble their pupils to greet any new arrival. Seeing a new face had always been reason enough for festivity.

This dismal entourage looked like they might be about to attend the funeral of someone who had not been well liked. I hoped they hadn't dressed up on my account.

Barnabas Nobbsnipe, the schoolmaster at the head of the subdued family, wore a fine suit done in gray wool. He stepped forward with his hands perched on his round belly and a self-satisfied smile on his face. Nobbsnipe favored me with a too-brief bow.