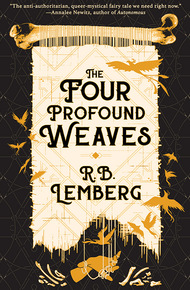 R. B. Lemberg is a queer, bigender immigrant from Eastern Europe and Israel. Their stories and poems have appeared in Lightspeed Magazine's Queers Destroy Science Fiction!,Beneath Ceaseless Skies, Uncanny Magazine, Sisters of the Revolution: A Feminist Speculative Fiction Anthology, and many other venues.

The Four Profound Weaves by R. B. Lemberg

The Surun' nomads do not speak of the master weaver, Benesret, who creates the cloth of bone for assassins in the Great Burri Desert. But aged Uiziya must find her aunt in order to learn the final weave, although the price for knowledge may be far too dear to pay.

Among the Khana in the springflower city of Iyar, women travel in caravans to trade, while men remain in the inner quarter, as scholars. A nameless man struggles to embody Khana masculinity, after many years of performing the life of a woman, trader, wife, and grandmother.

As his past catches up, the nameless man must choose between the life he dreamed of and Uiziya—while Uiziya must discover how to challenge the evil Ruler of Iyar, and to weave from deaths that matter.

In this breathtaking debut set in R. B. Lemberg's beloved Birdverse, The Four Profound Weaves offers a timeless chronicle of claiming one's identity in a hostile world.

I sat alone in my old goatskin tent. Waiting, like I had for the last forty years, for Aunt Benesret to come back. Waiting to inherit her loom and her craft, the mastery of the Four Profound Weaves. I wasn't sure how long I'd been sitting like this, and it was dark in the tent; I no longer knew day from night.

When the faded red woven tapestry at the entrance shifted aside, I drew my breath sharply, waiting for my aunt's thin, almost skeletal hand—but it was not Benesret. Of course not. Instead, one of my grand-nieces stepped in, plump and full of life, bedecked in embroideries and circlets hammered with snakes. Her eyes shone like stars in the gloom.

"Aunt Uiziya, don't sit here alone. Aunt Uiziya, you should come to the trading tent. Aunt Uiziya, bring some of these weaves—" The girl's bejeweled hand motioned at the weavings that hung, heavy and lifeless, around my tent. "You might sell something, and if not, just show your craft, yes?" And just like a flutter of wind, she was gone.

I kept sitting. But something had changed, as if some sliver of song entered my dead domain and withdrew. I had woven so much in those decades of waiting for my aunt to come back, but I wouldn't show them. None of them sang and yearned like hers did, none of them called the goddess Bird down from the merciless heat of the sky. My weaves hung lifeless, like bodies. Who would want them? Did I want them? I had not thought about that, just sat among them, the guardian of all the unwanted, forgotten things. I turned sixty-three this year; I would sit like this, until I sat among bones. My aunt could weave even from bones, but she never finished teaching me.

The flap of my tent had not been fully closed, and now the riot of light and of sounds trickled in, only half-real to my senses after a day spent in gloom. It was the commotion of trading—the rustling of cloth, the heavy sound of carpets unrolled for display, the bleating of goats. So much excitement in the encampment—the traders must be foreign. Show my craft? What craft? My life had stopped, like a wind trapped in a fist.

The girl should have left me alone, but now I was angry and hot and I wanted . . . I wanted something that wasn't this endless wait. Show my craft, like it once was, all the promise of the desert and its secret weaves, endless future that never came to be.

I was too large and too old for rash movements, but I dragged myself up, stiff in my joints from being still for so long. Hesitantly, I unlatched a large chest of leather in which I kept especially precious things. My late husband's wedding shirt, embroidered by my own hands before they wrinkled. A small ball of spidersilk spun by my daughter when she was a little girl. A note from the nameless man before he became nameless, given to me forty years ago. Beneath the precious debris of my life, a rustle of sand.

At last I pulled the thin, rolled-up carpet, hidden away these forty years. Shook it out. It was as long as I was tall, and slightly shorter in width. Sand grains made its threads, yellow and dun and shadow-warmth; thread-bones peeked out of their hiding places in the weave. If I called on my magical deepnames, I could make the carpet of sand float and fly, all the way up to the guardian poles of the tent.

"I have a carpet for sale," I said to no one in particular. "A carpet woven from sand, the second of the Four Profound Weaves that Aunt Benesret taught me before she was exiled." This carpet, that I had never shown anyone else but her. I would sell it, give it away, even—and then my yearning and my waiting would be done. And I would be done.