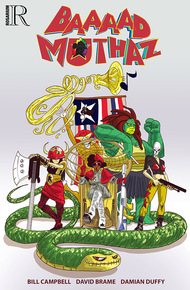 Bill Campbell is the author ofSunshine Patriots, My Booty Novel,and the anti-racism satire,Koontown Killing Kaper.Along with Edward Austin Hall, he co-edited the groundbreaking anthology,Mothership: Tales from Afrofuturism and Beyond.He also co-editedStories for Chip: A Tribute to Samuel R. Delanywith Nisi Shawl,Future Fiction: New Dimensions in International Science Fiction and Fantasy with Francesco Verso,andAPB: Artists against Police Brutalitywith Jason Rodriguez and John Jennings. His Afrofuturist spaceploitation graphic novel,Baaaad Muthaz(with David Brame and Damian Duffy) was released in 2019. His historical graphic novel with Bizhan Khodabandeh,The Day the Klan Came to Town,will be released by PM Press in 2021. Campbell lives in Washington, DC, where he spends his time with his family and helms Rosarium Publishing.

David Brameis a talented comics artist who has worked on titles such asBox of BonesandNecromancer Bill. He lives in Mexico.

These women are truly baaaad. They're rough. They're ready. They're space pirates. They're a James Brown cover band. They are the BAAAAAD MUTHAZ. Follow Afro Desia, Cali Vera, Alley Bastard, Candy Ass, Katana Jade, and Snake on their madcap cosmic adventures as they funk up the galaxy in search of the almighty booty!

Buckle up for a funky ride though space with the Baaaad Muthaz as they find the next score and serenade the mating dance of their enemies (amongst other gigs). It's the fun read your quarantine was missing. – Tenea D. Johnson