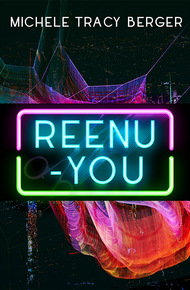 Michele Tracy Berger is a professor, a writer, a creativity coach and a pug-lover.

Her main love is writing speculative fiction, though she also is known to write poetry and creative nonfiction, too.

In 2020, her science fiction novella, "Reenu-You"about a mysterious virus transmitted through a hair care product billed as a natural hair relaxer,was published by Falstaff Books. Much of her work explores psychological horror, especially through issues of race and gender.

What if a visit to the salon could kill you?

What if a hair product harbored a deadly virus?

Kat is an out of work ski instructor who just wants to pack up her deceased mother's things, leave New York, and return to Aspen. Constancia is a talented but troubled young woman who just wants to start her first semester of college. In different shops across New York City, they and hundreds of other women of color try a new product billed as a natural hair relaxer called "Reenu-You". Then things start to go horribly awry.

Within days, they find themselves covered in purple scab-like lesions—a rash that pulses, oozes, and spreads in spiral patterns. They are at the epicenter of a mysterious virus spreading throughout the city. As the outbreak spreads and new cases pop up in Black and Latino communities throughout New York, panic, anger, and questions fill the streets.

What is this virus and where did it come from? Is it corporate malfeasance? Or is this an orchestrated plot to kill minority women?

In the face of a terrifying and uncertain future, Kat, Constancia, and a small band of other affected women are forced to confront their deepest fears to save themselves and others. As the world crumbles around them, they will discover more about each other, learn about themselves, and draw strength to face the future together. Reenu-You looks at the social and political meanings of hair, female friendships, and viruses.

Part treatise on beauty standards that affect women of color and part cosmopolitan horror story, Reenu-You is a refreshingly original tale of solidarity and strength in the face of the unknown as an epidemic begins. Psychological horror meets physical culture. – Tenea D. Johnson

I always thought that I'd die somewhere in the Colorado mountains in a gruesome skiing accident. I'm a skilled skier, but there is always an electrifying element of danger that makes the sport precarious as well as fun. My left knee might pop right out of the socket, severing delicate tendons, as it has done before when I try to do something too showy. And after my knee popped out I would fall back on the snow, injuring my body, breaking my lower back, hitting a tree at about seventy miles an hour. The pine trees with their prickly arms would embrace me and the slopes that I love would provide a picturesque burial site.

If I didn't die in the mountains, I surmised that I'd die somewhere at a posh ski club keeling over from a massive heart attack after I had outlived my usefulness as a ski instructor. At the very least, I hoped as everyone does, that I would leave this Earth wiser, a little thinner, moving right out of life's traffic into the path of something better. So far, none of my visions of death have come true.

A lot's been said about the early infected. I want to tell my story, because soon the virus will overtake me, too. The politicians, bureaucrats, and scientists shouldn't be the only ones who get to have their say about the virus and what it did. Despite its carnage, the virus did something special for me and for four other women.

I can remember the day that I went to buy Reenu-You. A shitty, humid New York morning greeted me in my mom's cramped apartment on Tremont Avenue in the Bronx. Neighbors across the hall had started their musical revelry consisting of Spanish reggae around eight a.m. Unless I'm skiing, I never get out of bed before eleven.

Coming from the store, my backpack was crammed with things that I needed for the next few days, my last ones in the city: fat-free cookies, unscented tampons, light bulbs, and six donuts from the Puerto Rican bakery around the corner. They were bowties, with thick white glazing running down the sides of the confection, pooling into the bag—the exact kind of food that I shouldn't have been eating. Like everyone else, I have a tendency to crave sweets when I'm stressed.

Though my mom and I were not extremely close, packing up her apartment after her death was the hardest thing that I ever had to do in my life, even though I had been through it once before with my father.

It was also so hard because I despise Nueva York. I'd lived in Queens and Brooklyn, was raised in the Bronx, although I hold all boroughs in equal contempt. I always feel hemmed in by the city, cut off from nature, like a cheating lover. Only my real lover is not made of ordinary bones and flesh; my paramour is fashioned from mountain peaks and snow that crunches underfoot.

My mom took me horseback riding, sometimes to the Catskills, to compensate for living in urban dung. These respites as a child, however, were not frequent enough. Since she was an artist, she could see the beauty in just about anything, even eyesore crumbling brownstones. Even the way big fat water bugs skittered across the floor. Strange, I know.

Most importantly in the backpack sat the bottle of Reenu-You Relaxing Natural Miracle Hair Tonic (Reenu-You, for short). Rogaire (Ro, for short) had told me about it a few days after I arrived. I had met pig-tailed Ro in the third grade and she was my only friend I knew from grade school who still lived in the city. When I came into the city on trips to see my mother, she got me current on the latest fashion tips, hairstyles, best places to eat, and where to go and how to be part of the hip crowd.

"Girl, Reenu-You makes your hair pretty, soft and straight. I know that you don't have anything like that in Aspen," Ro teased during our phone conversation a few days after my mom's funeral.

To be honest I was looking for a change, hairstyle just being one of the easiest and least complicated things to change about one's self.

After three years together, Peter and I had just broken up. With my mother recently dead, and I temporarily out of work from a major ski resort, what could I lose by trying a new hair product?

My hair is a dark chestnut brown, thick and worn in a clever bob processed with a variety of chemicals. I am always looking for new things to do with it because skiing dries out my hair and makes it unnecessarily brittle. I don't care for braids, twists, dreads or other fancy African hairstyles as I already stood out on the slopes, and in Aspen.

"We're going to get you through this," Ro said. I leaned into the warmth in her voice.

"You've gotten me through just about every hard thing. You probably need a break," I said.

"My life would've been boring all these years without you. You sure you don't want me to come and help? I can cancel the Atlanta trip," Ro said.

"I'm checking out two groups, a female DJ and a boy band. Shouldn't take me long. I'll be back to see you off. Goodness knows I probably won't see you again unless I trek out to Aspen," Ro said.

Ro made a small skeptical grunt. She had only been to Aspen once. I either traveled to see her and Mom or we met somewhere in between. I wondered what life would be like without the anchor of my mom to connect me to New York. But, I thought, there still would be Ro.

"What are you doing with her bigger pieces of art?" Ro said.

"She arranged for Parsons to take most of her stuff," I said. "So efficient, she made it easy on me," I said feeling a tightening in my throat.

"I wish she would have told us about the cancer sooner," Ro said with a slight dip in her effervescent voice.

"Yeah," I said. "People are the same in life and in death." An uneasy silence passed between us before Ro continued,

"Well, this hair tonic has been pumped on the radio and TV for the last month or so. It's blowing up! It's in a really funky female-shaped bottle. Unlike anything you've seen before."

"Oh? How much damage?" I said with interest.

"It's not so cheap but get this—it's touted as a natural relaxer! No chemicals. Kat, it smells so good you could dip your fingers in and taste it. Reenu-You smells like honey and vanilla all mixed together."

"I like chocolate, myself," I said absentmindedly. We both laughed.

The rash, comprising small purplish discs with a green center, started around my hairline about two days later.