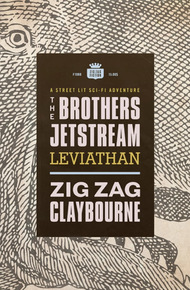 Zig Zag Claybourne is the author of The Brothers Jetstream: Leviathan and its sequel Afro Puffs Are the Antennae of the Universe. Other works include By All Our Violent Guides, Neon Lights, and Conversations with Idras. His stories and essays on sci fi, fandom, and howlingly existential life have appeared in Apex, Galaxy's Edge, GigaNotosaurus, Strange Horizons, and other genre venues, as well as the "42" blog at https://www.writeonrighton.com. He grew up watching The Twilight Zone and considers himself a better person for it.

His short story collection Historical Inaccuracies once topped a collection from Neil Himself on Amazon for about 3 seconds, likely due to its barbarian Smurf story, but this is inconclusive.

Two brothers. Their crew. One planet. Way too many evils. Plus the whale that was poured into the ocean when the world first cooled from creation. Epic book is epic.

Get ready for a showdown a billion years in the making.

The first book in the Brothers Jetstream Universe won't disappoint. The Brothers themselves, Claybourne's original ideas and clear, irreverent language will keep you reading and ready for the next book. – Tenea D. Johnson

"Wearing a bomb isn't something you think I should know in advance?" the clone snarled.

"No. You're very good at teleporting."

"I might not have realized explosive fibers were laced in all my clothing. Or what that beep in my collar presaged."

"I just taught you a valuable lesson. Things that suddenly beep are never good. Pissed them off royally, though. Oop, here they come. Run."

"Points for the exploding clone trick," said Adam. "This clone's more advanced than you."

"He's in the prime of his life. I'm an old man now. Eve, tell me what's going on. Alliances haven't formed in ages. Thoom are working with vampires, who are working against Buford…"

"Buford's become boring," said the unnervingly alluring woman. She sloughed scabs off her forearms. "His entire enterprise has stagnated, hasn't it?"

"If I see you again I snap your neck."

"And we hunt the others," the other alluring half of the ancient duo assured. She regarded Milo. "Counting coup, Milo? That's extremely juvenile."

"We can finish what we started without you two complicating things," said Milo.

"You would've been finished a long time ago in that case," said Adam.

"And family reunions are so infrequent," said Eve. She walked away. Adam followed.

"Here." Milo grabbed two jumpsuits from his pack and tossed them their way. "No need for you to walk the sewers home."

Adam gave a barely perceptible nod. A truly considerate son. A shame he refused to live up to his potential.

When they were gone Warren turned to Milo.

"I rather enjoy not wearing underwear."

"No. Briefs or boxers like the rest of us. Freedom ain't free."

"Understood," said Warren. Other than nesting pigeons, no one had witnessed the rooftop exchange. "I wish they hadn't threatened to kill me. I think I'm in love with her."

"Yeah, Ma has that effect on people. Let's go."