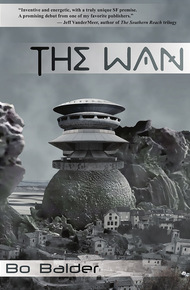 Bo lives and works close to Amsterdam. Bo is the first Dutch author to have been published in F&SF, Clarkesworld, Analog and other places. Her sf novel The Wan was published by Pink Narcissus Press. When not writing, she knits, reads and gardens, preferably all three at the same time.

The Wan by Bo Balder

In a far future, on a faraway planet, humans have become infected by the alien Wan, creatures that communicate by feeding each other poems composed of their own flesh. Obsessed alien and former human biologist Ing infects Frog, a barren slave girl, and Firdaus, deposed ruler of the human settlement, with the alien fungus.

When a once-in-a-millennium Wan reproductive event threatens to destroy all human life on the planet, Frog and Firdaus must choose between transforming their loved ones into cadaverous toadstools, and surviving – or watching them all die in the planetary holocaust.

Unless Frog can come up with a third solution – with the help of her greatest enemy.

The Wan by Bo Balder is a gritty, disquieting exploration of extreme adaptation via symbiosis with an alien intelligence whose endpoint is sessile (kin to Le Guin's "Vaster than Empires and More Slow", Tiptree's "A Momentary Taste of Being" and Boren's "This Woman Alakie and the End of Dima", with soupçons of Blish's A Case of Conscience and Kingsbury's Courtship Rite). The survivors of a human starship that crash-landed on an earth-like planet have reverted to gatherer-hunter levels of subsistence. When infected by components of the dominant planetary lifeform, they become quasi-zombi with lizard-like powers of regeneration who impart information by exchanges of flesh—and are now faced with an impending extinction event. – Athena Andreadis

Firdaus pounded after the Wan warrior along the steep cave floor, deeper into the tunnels. His breath sawed in his lungs. After a dry season of cold and inactivity, he wasn't in the best shape to hunt, but that was the heart of the matter. He had to lead the hunting party. He had to prove his power and virility, demonstrate his fitness to be the Stadholder of White City for another year.

In spite of the stitch in his left side, he increased his speed. The sticky salt in the air made him suspect that the desperate beast was leading him back to the sea.

Bamboo tapped on rock. He'd landed an obsidian-bladed spear in his prey's left eye and one in its ear socket. The more the cave ceiling jogged those spears, the more they would work themselves into the monster's brain. The glowapple around Firdaus' neck created a circle of dusk around him. Further ahead was only darkness. The creature's wheezes rasped against the tunnel walls, signaling that it was tiring.

Firdaus transferred his last spear to his throwing hand and hefted it over his shoulder.

His shins cannoned into an invisible rope. His legs went out from under him, shooting him headlong onto the sharp rocky floor covered with warm slime, blood, fish guts, and other offal. His shins smarted and stung.

Light flared up, a dozen times brighter than his fading glowapple.

A white apparition towered above him. A Wan.

Firdaus' breath hissed out of him. The flame in the creature's hand underlit a visage of black shadows and gray flesh, long teeth and dead-fish eyes. Winged arms beat up and down while it uttered a curse he couldn't hear through the blood roaring in his ears. A real Wan, risen from the black swamp to drag him down into its watery lair and devour him.

"Firdaus Eyvindurson!" a voice thundered, echoing off the walls, slamming into his ears with hammers of sound.

Every child learned of the Wan at their nurses' knees. Of their beauty, great in spite of their unnatural white skin. They'd tempt you with their singing and their promises of wealth and immortality. They'd lure you into their underground halls in the marshes, and no one had ever returned alive. And if somebody did, everyone he knew would be dead and gone. Plenty of reason to kill the Wan on sight when they ventured out of the Maze.

This one wasn't beautiful or alluring. He wouldn't be snared as easily as the foolish young men in the nursery tales. Firdaus had people to take care of. Hilm, Boon, his younger children, the soft arms of his lovers waiting for him, ten thousand hungry citizens watching the sky for omens about his fate.

He scrambled to get his feet back under him on the slippery, uneven cave floor, the Wan's white hairless shins right in front of his face. They reeked of mold and dank cellars. He lifted his head, but no matter how hard he blinked, he couldn't see past the bright light the figure carried. A cold paw gripped his elbow and hoisted his arm up. Firdaus lunged for the shadowed neck; a hard pale limb cuffed him in the face. He fell back, stunned.

Something pierced the fleshy part of his thumb. His mouth opened in shock. A white hand jammed a slimy fish-shaped thing into his mouth. He spat it out, gagging from the taste. Whitefish. What the prophet?

"What do you want?" he asked when his mouth was clear.

He swiped at a white leg, but it danced out of reach on dainty, human-looking feet. Firdaus overreached and smacked his nose on the rocky ground. When he scrabbled onto painful knees, inky darkness stared back, his night-sight lost because of the brief flash of light.

The creature was gone, as if it had never been there.

The Wan had known his name. What did that mean? He rubbed his thumb where the creature had stung it. Had it tasted him and found him not to its liking? Rumours abounded about the Wan feasting on newborn flesh. Its odour still hung in the air. A reminder to get away before it returned for another bite.

He groped around in the dark until he found the spear. His hands shoved a pebble that clanked instead of scraping. His fingers felt straight lines, the smooth coolness of metal. An ancestral object, a six-sided star with a grooved hole in the middle. An omen. A good one, he hoped. He shoved it onto his thumb and stumbled forward, hand and spear held out while his eyes adjusted back to the dim dapple of light.

After the murky tunnels, the cloudlight seemed as bright and evil as the Wan's torch. The other hunters waited for him, their hands as empty of Wan ears as his. He clambered up the steep cliff to his father's old villa in silence.

The second hunting party lounged around small fires in one of the seaside rooms, the orange flames almost invisible in the daylight. A precious substance called "glarse" filled the windows, shielding the fires from the sea wind. Glarse was full of shining lights and reflections at night, but in daylight, you could see through it as if it wasn't there. Nobody knew how to make it anymore.

"Heya, huntfellows," he called out. "I winged it, but it got away."

They crowded around him, asking excited questions. His milkbrother, Ali, led the raggle-taggle of hunters and fishermen in a rousing cheer. People struggled up, stiff from waiting, eager to take their turn. Firdaus let it wash over him, wondering why he hadn't told the rest of the tale. They deserved to know everything, didn't they? Yet he couldn't bring himself to mention the creature speaking his name in a human voice, the sting that throbbed in the fleshy base of his thumb. He'd tell Ali, later, when they were alone.

The relief party trotted off with their axes, knives, and bows, fresh glowapples ready. Their spines were straight and their steps light. Not telling them about the Wan who'd trapped and bitten him was the right decision. He'd think on what it meant, sleep on it, but first he wanted a cup of something hot and a moment of rest.