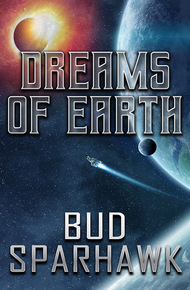 I have published over almost two hundred hard science fiction stories to various professional magazines such as ANALOG, ASIMOV'S, and others. Three of my Novellas were finalists for the Nebula award. I've produced one mass-market paperback – VIXEN – that received a favorable review in Analog magazine. DISTANT SEAS and SHATTERED DREAMS are my more recent print novels. NON-PARALLEL UNIVERSES is a collection of the best stories of the last decade. Mostly my stories appear in sf magazines and occasionally anthologies.

A complete bibliography of my work is available at http://www.sff.net/people/bud_sparhawk

Dreams of Earth by Bud Sparhawk

Case awakens on a star ship with no memory of his origin. He is told that he is the sole survivor of a ship that his alien benefactors assume came from an undiscovered system. He struggles to make sense of the flashes of unconnected memories that plague him as he searches for his home world. In the process of searching for his true identity, he learns about the many species of humans who travel among the starts and discovers humanity's role among a galaxy- spanning alien civilization.

While evading inimical forces are vying to learn of his origin, he begins to have doubts about his allegedly altruistic caretaker's motives. As his memories become coherent, he confronts possible theories of his origin: what if his ship's drive was an unknown method of FTL; what if he'd come from a colony lost in the early days of mankind's expansion; what his ship had traveled in time; or perhaps his memories were all false and created for some unknown purpose? Each of these ideas is considered, discussed, and discarded as he finally comes to terms with his new identity.

Dreams of Earth by Bud Sparhawk is Odysseus meets The Fifth Element: a human awakens on an alien ship bereft of memory and any context, although he increasingly suspects that he's the only survivor of humanity's first attempt at FTL travel. Befriended by an ambiguous alien ally who keeps changing shapes (though by neither the SFF Borg mecha mode nor the standard transmogrification of urban fantasy), the lost soul makes his way through many places and cultures, seeking to retrieve his identity, discover his point of origin and maybe regain his home. – Athena Andreadis

The weeks since I recovered had passed quickly as I learned the basics of life aboard Tollembol, this strange vessel that had rescued me. I had recovered enough to clean and dress myself, get food when I wished, and had begun to formulate questions about my past.

The accident had been catastrophic, I'd been told. I was the sole survivor, but of what I was not sure, so muddled was my mind. Strange dreams and chance memories filled my head while shooting pains and sudden tremors occupied my body.

"Give yourself time, Case, D'vore had said, using the name he'd given me. "It takes time for mind and body to heal after such trauma. Fill your days with undemanding tasks and let your mind rest." To aid that process he permitted me to help in the ship's surgery.

As I was cleaning a stain from the surgical platform where we'd recently performed another grisly operation, I felt Tollembol, our strange star-ranging ship shake. The motion was so unexpected, so like an earthquake, that I became immediately disoriented, no longer so trustful of the apparent gravity that mysteriously gave everything a proper up and down-ness.

"Up to this time I had taken the ship's gravity for granted, another miracle among many that I'd encountered since awakening. No one remarked upon it or even found it strange that we should not be floating about free from gravity in this vast gulf between the stars. Somehow I knew that even if someone explained it to me I would probably not grasp the answer until I had once again gained more understanding of this technology.

Without warning, the deck dropped beneath my feet and then slammed upward with considerable force. My knees buckled under the impact. I threw an arm out to keep from staggering. As I fought to retain my balance I recalled that I'd felt this before, only that time I had fallen under the console.

Console? That must have been what saved me while the others of my crew had been crushed! I must have …