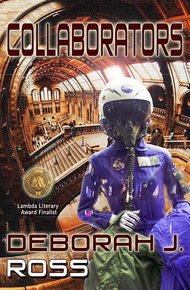 Deborah J. Ross writes and edits fantasy and science fiction, with over a dozen novels and six dozen short stories in print. Recent books include Thunderlord and The Children of Kings (with Marion Zimmer Bradley); Collaborators, and The Seven-Petaled Shield epic fantasy trilogy. Her short fiction has appeared in F & SF, Asimov's, Star Wars: Tales from Jabba's Palace, Realms of Fantasy, and Sword & Sorceress. She's edited the Lace and Blade series, Mad Science Café, Sword and Sorceress 33, various Darkover anthologies, and other anthologies and novels. She has served as Secretary to the Science Fiction Fantasy Writers of America (SFWA), the Board of Directors of Book View Café, and the jury for the Philip K. Dick Award. When she's not writing, she knits for charity, plays classical piano, and hikes in the redwoods.

Poised on the brink of war, the people of the planet Bandar are stunned by the arrival of a disabled Terran space ship. But the Terrans are even less prepared to understand the politics, gender fluidity, or mob reflexes of the natives. The Terran captain uses increasing force as the only way to ensure desperately needed repairs. Hoping to bring enlightened human values to the natives, a young scientist's intervention leads to disaster.

After a vicious assault, a pregnant native becomes radicalized. A failed poet sees the Terran occupation as a way to gain the recognition he craves. A widow whose farm is bombed using Terran weaponry journeys to the capital in search of help and ends up facing a firing squad. And a reporter becomes the voice of the resistance, determined to take back his world from the invaders...

As violence escalates, the fate of both peoples rests with those who have suffered the most. Can they find a way to forgiveness…and peace?

Collaborators by Deborah J. Ross—whose work has won multiple prestigious nominations and recommendations—was a Lambda Literary and Tiptree (now Otherwise) Award finalist. A story of first contact, it's close kin to Ursula K. Le Guin's Left Hand of Darkness in positing humanoid aliens who acquire sexual attributes only when they enter estrus, but takes its own unique path: the contact with humans brings budding polarization within the alien society to a devastating head, (up)ending many lives. A lengthier analysis of Collaborators plus works by Leckie, Mixon and Slonczewski, can be found at "Space Operas and Gender Shoals" (https://is.gd/pfuyCO). – Athena Andreadis

Miraz: SPACE SHIPS SIGHTED OVER CHACARRE, Report by Talense. Throughout northern Chacarre, hundreds have reported sighting unknown airborne objects believed to be alien space ships. Kreste's representative declined comment until the official science report is completed, but clan sources indicate a flurry of communications between the Helm offices and their counterparts in Erlonn. We have received one report, quickly denied as rumor, that troops have been secretly stationed near the Erlind border.

Hoax or sensation? Conspiracy or political gambit? No one is willing to say. Meanwhile, the people of Chacarre are watching and waiting for answers.

Hayke and his two children had carried blankets out to the hills beyond their farm near the Erlind border. They ate leftover potato rolls while the light faded from the sky. Early summer heat hung in the air, sweet with the smell of the ripening hay. The world softened into shadow, tone upon tone of layered gray except for the ghostly white of Hayke's fur. Night-hoppers chittered; the grass rustled with the passage of a snake.

Torrey, the older child, had been out in the fields all day. Sun had bleached the downy fur on his face to platinum, probably his last season of that pure, shimmering color. He was growing fast. Little Felde played his pipe to any living thing that would sit still and listen.

Slowly the first pale stars emerged: the Archer, the Water-Dove, and the Serpent, which Wayfolk called the Grommet. Felde loved hearing the story of the little grommet who sang such wonderful music to the stars that when he died, they could not bear to lose him. Torrey insisted he was too old for such tales. Tonight he was hunting other quarry in the skies.

Hayke, lying back on the blanket and gazing up at the stars, felt an absurd sense of tenderness. He loved both his children, but Felde, the one he had not carried...Felde was special. Perhaps because Felde was the last child he and Rosen would ever have, perhaps because it was Rosen who had borne him. Loss, still poignant after five years, pulsed through Hayke.

"There it is!" Torrey pointed to the northeast at the unwinking mote of light.

Felde snuggled close, curling his arms around Hayke's chest. "Are they really people from another star?"

"That's what they say, little one."

"Adso says it's all an Erlind plot," Torrey said. Adso was fourteen and Torrey's closest friend.

"I'm not saying Adso's wrong-minded," said Hayke, "but imagine if you'd never set foot off this farm, never seen anything but hens and woolies, and then one day someone told you about the great city of Miraz. Thousands of people, all eight clans living together in one place. Towers and bridges and museums. Trams and temples. You'd think he was making it up."

"I'd think his brains were corked!"

"But he'd be telling the truth, wouldn't he?" said Hayke.

Torrey choked on his own laughter. Hayke hushed him.

Felde lifted his head. "I'd like to meet the star people."

"You, grub?" Torrey said. "What would you do if you did meet one? Run away howling?"

After a moment, when the night had fallen quiet again and the stars seemed even closer, Felde said in his child's voice, "Do you know what I'd do if I met the star people, Dimmie?"

Hayke tightened his arms around Felde, felt the child's bones like a delicate sculpture. The heartbeat, soft and light against his own. His crest fluttered with a tenderness he could not speak. He had no words for how very precious this child was to him. Rosen…Rosen would have loved him very much.

He wished with all his heart that Rosen might have lived to see this night, this unwavering star of hope.