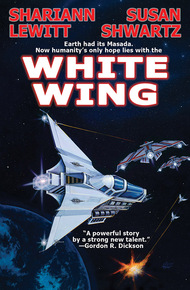 When we first decided to create "Gordon Kendall", Susan and I drew elements from both of our actual experiences. I'm the one who studied in France and completed my graduate work at Yale. I have gone on to publish science fiction under my own name, which can be found at fantasticbooks.biz or on amazon.com. My story "Fieldwork" appeared in Gardner Dozois' The 34th Best Science Fiction of the Year (Tor, 2017). I teach in the creative writing program at MIT, live in the greater Boston area, and try not to drive like a native most of the time.

For decades, Susan Shwartz has led a double life. By day, she has worked as a writer, editor, and marketer on the VP level at a number of leading Wall Street firms, and can explain hedge fund risk in 30 seconds.

By night, weekend, and lunch (what's that?), Susan is the prolific author of about 25 science fiction/historical fantasy novels, anthologies, and collaborations. Her subjects are best described as "all over the map," including the Silk Roads; interplanetary capital markets; Arthurian legends; and, with the late Josepha Sherman, Star Trek. Together, they wrote five novels and a number of short pieces, as well as the script for the audio book that Leonard Nimoy actually complimented and read for the taped edition.

She has written approximately 90 pieces of short fiction and been nominated for the Nebula five times, the Hugo twice, the Philip K. Dick once, the Edgar once, and the World Fantasy Award once. Published in 10 languages, she is known for deep character development and richly detailed backgrounds. She covered Game of Thrones' controversial Season 5 for The Wall Street Journal online, and has written for Vogue, The New York Times, and other major markets.

Susan earned her B.A. in English from Mount Holyoke, and her M.A. and Ph.D. from Harvard. An experienced public speaker, she has lectured or participated on panels at Princeton, Mount Holyoke, Smith, the Naval War College, the U.S. Military Academy, the U.S. Air Force Academy, and Harvard. She also asked "where else would you buy a Borg?" in a nationally broadcast www.ibm.com commercial that haunts her on YouTube.

Susan can be found on LinkedIn and Facebook. For copies of her other works, please see www.amazon.com or http://www.openroadmedia.com/. She lives in New York and is an enthusiastic opera, Broadway, and theater fan.

She has just one more thing to say: "I'm BACK!"

Earth is gone, blown to bits in battle with the alien Sejiedi. Now the remnants of humanity fight on, in uneasy alliance with the Galactic League—their only purpose to avenge their world, their only pride the Honor of the Wing.

But League politics will not tolerate pride in a refugee people, and the White Wing is under insidious attack. A powerful enemy attempts to brand one unit of the Wing as traitors, discrediting the entire human race.

But the Honor of the Wing is not so easily compromised.…

White Wing by far-ranging polymaths and multi-award nominees Shariann Lewitt and Susan Shwartz is a descendant of Titan A.E and the Faded Sun trilogy in Cherryh's Union-Alliance universe, infused with polyamory. Its protagonists must endure several layers of exile: not only has Earth been destroyed by an advanced culture that's relentlessly usurping intergalactic territory, but Earth-born refugees and their descendants are also despised by other Galactic League members. What gradually emerges is that the fighting units of the undervalued contingent are intertwined families, and that the combined knowledge and strengths of one of these hubs may hold the answer to the life-and-death struggle against the alien adversaries. – Athena Andreadis

"They got her," someone said. Zann turned and stared hard at the speaker, who lowered his eyes. Red Wing. The eight people who crowded around Zann's board ignored her studiously. They knew, they all knew. The White Wing took no prisoners. And they were never taken in battle. Never. Not one capture in two hundred years.

The violet staining the holo crept out farther and deepened. The white fleck appeared to move slightly, to sink into it. Tractor beams might be notoriously slow, but they were impossible to break once they drained a ship's power.

The blood thundered in Zann's ears. She felt as if the entire staff of Battle Op could hear it pound, and she wanted to curse it for giving her Wing away. Almost imperceptibly the staff of Battle Op shifted position, without even the echo of a scuffle. Zann found herself shifting with them. They were all standing at attention.

"Battle Op, record. This is Maryam of White Wing, to Gregory, squad leader. I request the privilege of the Mercy of the Wing."